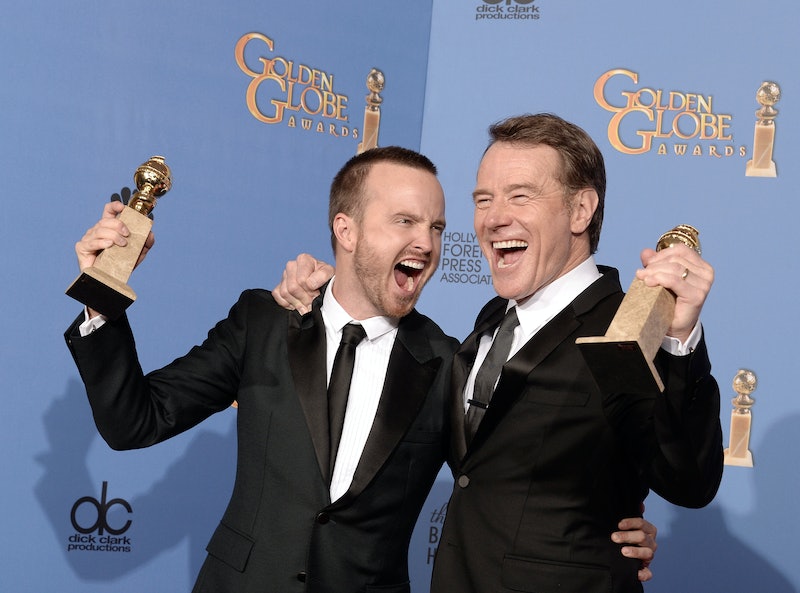 As the last few episodes of Breaking Bad wound down, fans and critics alike started wondering about the fates of the show's leading actors. Now that their series was ending, what would Bryan Cranston and Aaron Paul do next? The possibilities were endless — TV? film? An entire career built on charging people to hear them say "yeah, bitch?" — but one thing was for certain: whatever they decided to do, the two actors' choices would be entirely different from each other's. After all, Cranston and Paul, while both talented, are hugely dissimilar actors; without a doubt, their post-Breaking Bad careers would be nothing alike. Eight months after the last episode, though, it turns out that we were very, very wrong. Cranston, now in Godzilla, and Paul , coming off of Need to Speed , have shown that they share a much more similar post-show mentality than anyone would've thought. Let's take a look:

Really Bad, Big-Budget Action Movie Based off a Famous Franchise

Cranston: The actor's first big project after Breaking Bad is Godzilla, an action-packed reboot of the famous monster franchise. Although reviews haven't been horrible, they certainly could've been better; critics have panned the film's one-dimensional characters and expository dialogue. At the box office, however, Godzilla brought in over $9 million on its opening night, the second highest for any 2014 film, and it's expected to make $70 million over the course of the weekend.

Paul: Paul filmed a number of movies between 2013 and 2014, but Need for Speed was the first to hit theaters. An adaptation of the video game series, the action film earned mostly negative reviews, with critics calling it "preposterous" and "a glorified car commercial." Speed did much better commercially, though, bringing in over $200 million internationally.

Cranston: Last year, Cranston showed up on episodes of The Simpsons, The Cleveland Show, and How I Met Your Mother. He also directed a few installments of Modern Family.

Paul: Like Cranston, Paul guest-starred on The Simpsons, and also hosted an episode of Saturday Night Live.

Cranston: Since September, Cranston has been starring as former President Lyndon B. Johnson in All the Way, first in a Cambridge production and then on Broadway. He's earned rave reviews for his Tony-nominated performance, and is expected to continue playing the part until the end of June.

Paul: Hellion, an indie drama about an emotionally absent father (Paul) and his delinquent teenage son, premiered to huge praise at Sundance back in January. Paul's performance, in particular, earned substantial acclaim, with some critics noting how totally different the part was than the actor's Breaking Bad character. Jesse Pinkman, a guy who cared for his girlfriend's son as if he was his own, a deadbeat dad? Impossible.

Tiny Indie Movie That No One Saw

Cranston: Have you heard of Cold Comes the Night, a crime thriller starring Cranston, Alice Eve, and Logan Marshall-Green? Didn't think so. Apparently, the movie came out in January, but only like, five people actually saw it, because it made $16,000 dollars in theaters. The terrible reviews probably didn't help.

Paul: To be fair, Paul's own little-seen indie, Decoding Annie Parker , only came out a few weeks ago, so it still has time to get noticed. Yet judging by its reception so far, that's unlikely; the drama, about the near-discovery of a cure for cancer, has made only about $40,000 dollars in theaters and on-demand.

Cranston: Not much is known about the plot of Get a Job , an upcoming comedy, but the cast is a different story; the movie is said to star Cranston, Miles Teller, Anna Kendrick, Christopher Mintz-Plasse, Alison Brie, and Marcia Gay Harden, among others. There's also Kung Fu Panda 3, which, in addition to its regular stars Jack Black and Angelina Jolie, will feature Cranston, Rebel Wilson, and Mads Mikkelson. Honestly not sure which film sounds more exciting.

Paul: Paul's Fathers and Daughters, a drama, has him co-starring with Russell Crowe, Diane Kruger, Amanda Seyfried, Quvenzhane Wallis, Janet McTeer, Octavia Spencer, and Jane Fonda. He also has A Long Way Down , a dark comedy coming out this summer with Toni Collette, Pierce Brosnan, Imogen Poots, Rosamund Pike, and Sam Neill. How soon can we buy tickets?

Cranston: Walter White himself may not have expressed his interest in appearing in Better Call Saul, the highly anticipated Breaking Bad spin-off, but his co-star did it for him.

Paul: Said Paul in an interview early this year, "Both Bryan and I want to be a part of that, if they'll have us." To that, we say: yeah, bitch!