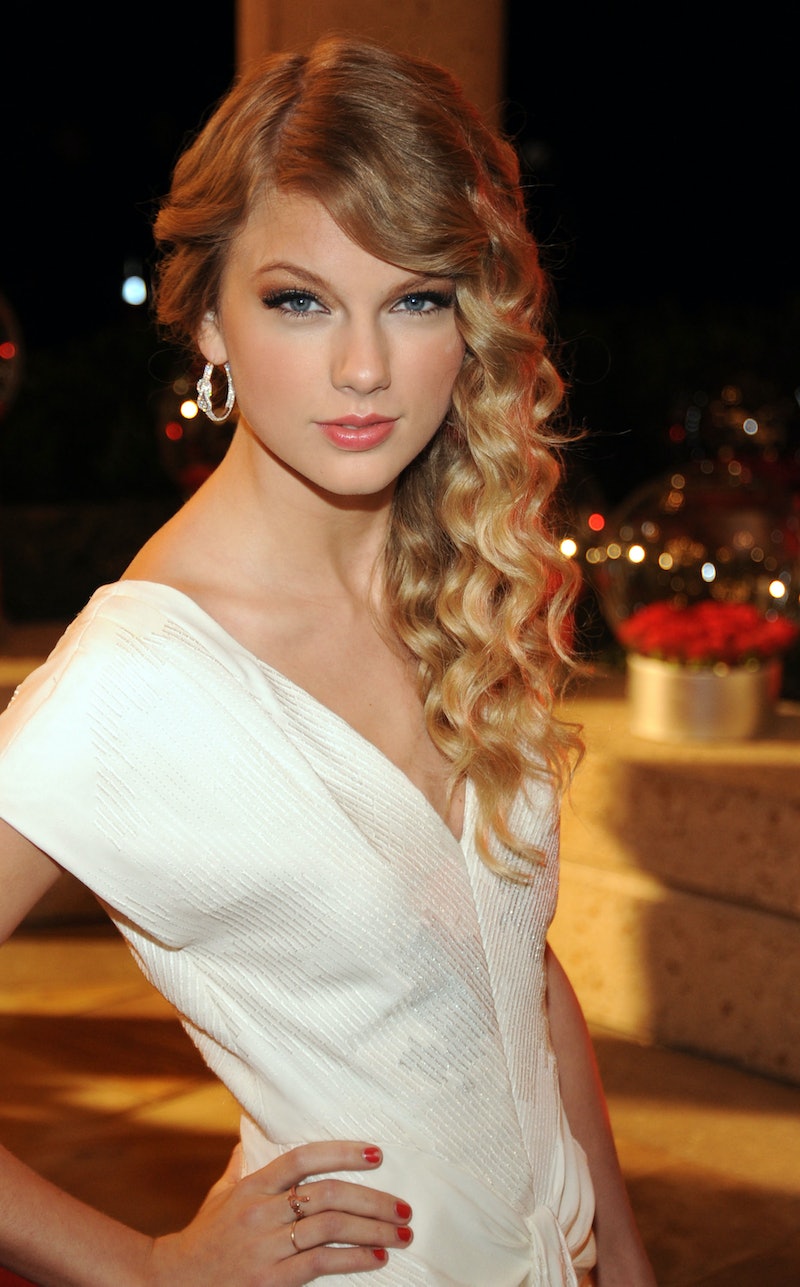 Remember when Taylor Swift was that girl with teardrops on her guitar? She sang country songs about what it was like to be a 15-year-old in high school. Then just a couple years ago, she was all grown-up and singing about what it's like to be 22. A lot changes in seven years, huh? Well, despite getting older, she's actually still the same old Taylor she was when first starting out — just with straightened hair and award-winning music. As we eagerly await her new album, I decided to dig up old interviews Taylor Swift gave in 2007 and 2008. Back then, The Washington Post described Taylor as a fantastic interview subject, saying,

Why can't they all be like Taylor Swift? The young country super-starlet is a flat-out fantastic interview subject. So open and honest and funny and interesting; so willing to play along - to go here, there or anywhere during the course of an interview.

As seen in her recent Rolling Stone interview, she's still not afraid to be honest and open up in interviews, which is great. Now let's take a trip down memory lane and compare her answers seven years ago to the responses she'd likely give today.

The following excerpts are from a Washington Post interview in February 2008 when Swift was 18. It's interesting because the interviewer spoke to her backstage at the Grammys and said, "When we finally sat down, deep inside the Staples Center, as Kanye West was rehearsing for his televised performance, we covered quite a bit of ground." Little did they know that the following year, West would infamously interrupt her on stage.

When I created it, I was in 10th grade and all my friends had MySpaces. Their MySpaces talked about what they liked, what cheerleading squad they were on, who their boyfriend was and whatever. I made a MySpace just like that, you know? As soon as something happens, I go to MySpace to make sure people know about it. I love it. And I didn't think anything of it when I created it, you know?

LOL, remember MySpace? Swift used to use the site to talk directly to fans. This is totally like how she now leaves her fans comments on Instagram. Even way back then she was a social media queen.

Running into Drew, the inspiration behind "Teardrops on my Guitar"

He showed up at my house when I was leaving to go to a hockey game with Kellie [Pickler] and Carrie [Underwood]. This car pulls up and two guys get out, and one of them is Drew. I hadn't talked to him in two-and-a-half years. He was like: "Hey, how's it going?" And I'm like: "Wow, you're late? Good to see you?" But we were civilized. I have theories about what he was doing. He had his friend with him, so maybe he was trying to prove to people that the song really is about him or whatever. Or maybe he was really trying to be friends. Or maybe he thought I was still pining away from him. Whatever!

I appreciate that Swift is all "whatever" about this. Plus, now she's no stranger to writing about her exes. Just look at "Out of the Woods" (Cough, cough, Harry Styles). Also, she was friends with Kellie Pickler and Carrie Underwood back then. This just shows she's always had strong friendships with her fellow successful females.

You can draw inspiration from anything. If you're a good storyteller, you can take a dirty look somebody gives you or if a guy you used to have flirtations with starts dating a new girl or somebody you're casually talking to says something that makes you sooooo mad — you can create an entire scenario around that. You don't have to date people or be married to people to write songs about them.

This is true! Swift has proved you can find inspiration in anything — whether the city you live in, or the guy you used to date. She's always been creative when it comes to songwriting and that hasn't changed in the past six years.

Switching things up, the following quotes are from an interview with CMT, who played 20 questions with T. Swift in 2007. The interview opens by saying, "Taylor Swift hasn't graduated from high school yet, but she's already smart enough to know the secret to success in country music." Well, in the time since then, it looks like she's found the secret to success in pop music too!

I think Kenny Chesney or Garth Brooks would be the coolest duet partners. I look up to them so much for their work ethics. I was lucky enough to open up for Kenny on some shows this summer, and watching him work was so inspiring. He and Garth just represent true artists to me, and any project I could work with one of them would be an honor.

That dream came true! She performed with Chesney several times since then, including this 2009 performance:

My best friend, Abigail, and I like to drive past our ex-boyfriends' houses.

I feel like this is probably much more difficult now that she's super famous. But I bet she stalks them on Instagram, right? She also fills her free time with tons of craft projects.

I love CSI: Las Vegas and Grey's Anatomy. I've come to the conclusion that the guy I end up with will remind me of the character Denny Duquette from Grey's.

Isn't her cat named after Meredith from Grey's Anatomy ? I totally get it now. I'm surprised Law & Order SVU isn't on the list though, since she also has a cat named Olivia Benson.

I have a cat named Indi (who hates everyone in my family except for me) and two Dobermans. They're really sweet, but if you break in, they will eat you.

Wow, that last part about the dogs sounds ferocious. Also she was just as cat obsessed back then, which is pretty purrfect!

Being A Role Model

I think it all comes down to who you surround yourself with and how strong your morals are. Before I make a decision, I stop and think about the 10-year-old girl I saw last night at my concert in the front row. I think about her mom. I think about how they bought my CD, thinking that I'm a good role model. Then I think about how they would feel if I did something to let them down. I can't imagine a greater pain than letting one of those mothers down. I honestly can't.

She's definitely continued this trend of having strong morals. The only difference is really that now she's an awesome feminist role model too! Keep it up, Taylor. I'd say "never change," but based on these interviews, it doesn't seem like you will anytime soon.