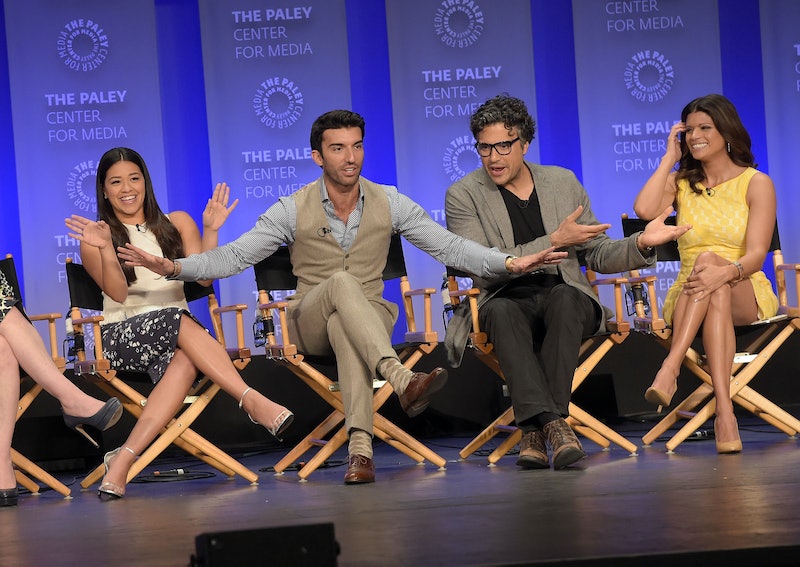 The Critics' Choice Television Awards have only been around for five years, but even though they don't have a long history, they boast an impressive track record of selecting deserving winners. I have major faith in any awards ceremony that consistently awards Orphan Black star Tatiana Maslany's acting, so there's a chance that Jane the Virgin could win best comedy series at the 2015 Critics' Choice TV Awards. Jane the Virgin is up against Comedy Central's Broad City, CBS' Mom, HBO's Silicon Valley and Veep, Amazon's Transparent, and FX's You're the Worst. And while I respect all of the shows (Broad City in particular), Jane the Virgin should take home the prize.

With Emmy favorite Modern Family not being part of the equation, the 2015 Critics' Choice awards are really anyone's game. Broad City, Silicon Valley, and Veep were all nominated last year, but lost to Orange Is the New Black. While I would accept it if any of the repeat nominees won, I can argue that Jane the Virgin is the most dynamic of all the nominees. The show is a heartfelt comedy with plenty of laugh-out loud moments mostly courtesy of Rogelio (actor Jaime Camil is a best supporting actor nominee for his role). But the show has a serious soul and with its soap opera-like hairpin plot twists, it's more complex than your average multi-camera sitcom.

Since Orange Is the New Black won last year, it's obvious that the Critics’ Choice Television Awards isn't afraid to award a show that doesn't perfectly fit into the "comedy" category, which is an excellent sign for the CW series. Jane the Virgin is consistently good with a strong ensemble of actors. Crazy things happen to regular people (and not-so regular people like drug kingpin Sin Rostro) and the series manages to balance real-life comedy with telenovela high drama.

This anything-can-happeness mixed with genuine characters gives Jane the Virgin a rare, fresh quality that's unlike any shows on American TV right now. Not to mention, the show is really well-made and thought-out — with the series creating a whole believable and colorful world in Miami. Although some of the plot twists can be exhausting, the fact that the narrative seamlessly keeps viewers up-to-date, while hilariously making our heads spin is one of the show's strongest suits. And that credit goes to one major character: the latin lover narrator.

When shows use voiceovers or a narrator, I often find it to be a cop-out that weakens the narrative, but the creative way that Jane the Virgin's narrator is mixed into the show only adds and strengthens the level of humor that the show possesses. Whether he is acting as Jane's conscience, talking directly to the viewers, or working off of the cleverness of the onscreen words, the narrator is always providing spot-on commentary and helpful reminders. The narrator, plus the over-the-top fantasy sequences, help make Jane the Virgin one of the best series out there today — comedy or drama.

But that's not to underestimate the rest of the cast. Petra's facial expressions deserve to win their own award. Alba's humor is understated and the show uses the fact that she primarily speaks Spanish to make her snide remarks even more biting at times. Michael and Rogelio's bro-downs were some of my favorite moments of Season 1. Xo has a knack for capturing the lovable neuroticism of a flighty woman who has a grown daughter who is more mature than her. The no-nonsense Rafael shines in the fantasy sequences. Even the artificial inseminator herself, Luisa, excels at adding absurd, yet somehow relatable, antics into the show's equation whenever she appears.

And of course, I could not neglect to mention nominee Gina Rodriguez's Jane, who can have me giggling one second and tearing up the next. Her portrayal is entrenched in realism and she has an outstanding ability for physical comedy that it's no wonder Rodriguez won the Golden Globe this year for her performance.

Jane the Virgin was already the People's Choice for Favorite New TV Comedy this year, so why shouldn't it become the critics' choice for best comedy too? It's not always commonplace for a show to be so lauded by both professional critics and viewers, but that's just a testament to how lovable and funny Jane the Virgin is. So see if the freshman show wins the major comedy TV award on Sunday, May 31 at 8 p.m. on A&E. And if Jane the Virgin does win, you best live tweet about it — it would make Rogelio proud.