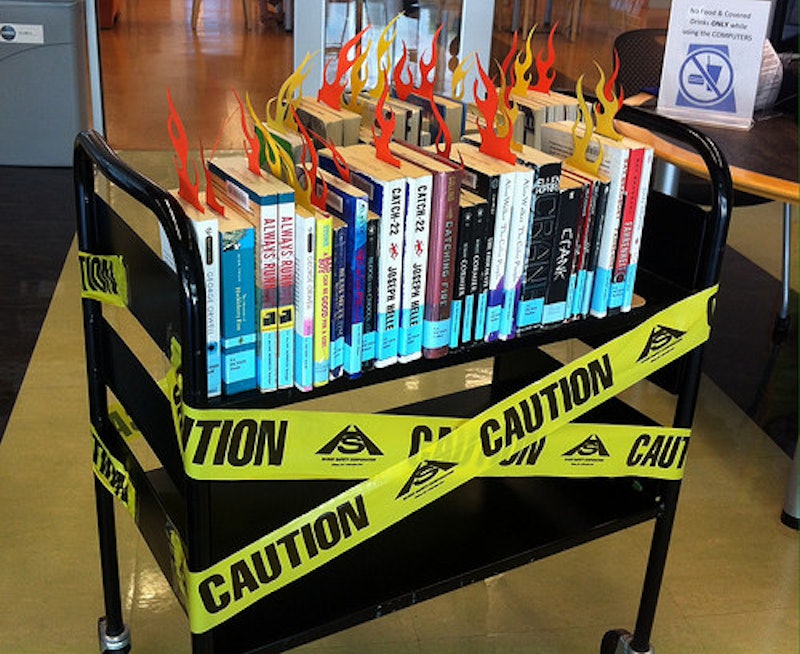 Student- and parent attempts to ban various books is sadly not uncommon in high schools, but it's unusual to find similar efforts in colleges. However, a student and her parents are currently trying to ban four graphic novels at Crafton Hills College in California, including Fun Home by Alison Bechdel and Persepolis by Marjane Satrapi. And the whole thing feels very... icky.

Although Tara Shultz, a student at Crafton Hills, was provided with a syllabus for the works to be taught in an Enlgish course she took on graphic novels, she says that she was not properly warned about the content of certain books, which contain nudity, sex, and violence. She and her parents complained to the administration and, along with several of her friends, protested outside the administration building.

“It was shocking,” Shultz told Redlands Daily Facts. “I didn’t expect to open the book and see that graphic material within. I expected Batman and Robin, not pornography.” (Which is a common misconception about what graphic novels are like.

Shultz and her parents feel the professor should have told the class on the first day about the mature content so that students could have withdrawn without affecting their grades. However, they also don't think the books should be taught at all, and don't believe they should be sold at the campus bookstore, either.

The professor, Ryan Bartlett, has taught the course twice before without complaints from students. “I chose several highly acclaimed, award-winning graphic novels in my English 250 course not because they are purportedly racy but because each speaks to the struggles of the human condition," he told Redlands Daily Facts in an email. "The characters in the chosen graphic novels are all struggling with issues of morality, self discovery, heart break, etc. The course in question has also been supported by the faculty, administration and approved by the board.”

The course listed 10 novels as required reading. Shultz and her parents have objected to four: Fun Home, Persepolis, as well as The Sandman, Vol. 2: The Doll’s House by Neil Gaiman, and Y: The Last Man, Vol. 1 by Brian Vaughan.

The whole thing is odd not necessarily because of the facts — such complaints are raised all the time in America — but because it is unusual to see a case like this at a college. It reads like the classic script for a high school book challenge: a student reads a book for class or from the school library that is deemed too mature, and the parents get involved to try to remove the book from the school curriculum and the premises. It's a rather extreme approach to an issue with numerous less drastic measures, such as providing an individual student with an alternate assignment, but it still happens every year.

However, by the time students reach college, the general consensus is that they are mature enough to begin handling more serious, unsettling topics, particularly in upper level courses. As they should be, since college students are typically either adults or at the very least mature enough to be in college.

Recently on college campuses there has been a trend of students advocating for college professors to include trigger warnings on books containing subjects like sexual violence or suicide to help students who have history with such things and might need forewarning to protect their mental health. But there is a big difference between asking professors to provide additional information about material and saying that certain books shouldn't be taught at all. Trigger warnings add information rather than removing whole books.

The Shultz family's challenge, on the other hand, doesn't seem to be that the books in question reactivated any past trauma for Tara Shultz, but simply that they don't think the books' content is appropriate and should therefore not be allowed on campus. Which is odd. College should be precisely the place to explore difficult and often upsetting topics.

So is this the new frontier in book challenges in America? Will college students and their parents now be expecting professors to stop teaching challenging topics and controversial books? Or is this all just a strange anomaly?

I'm hoping for the latter.