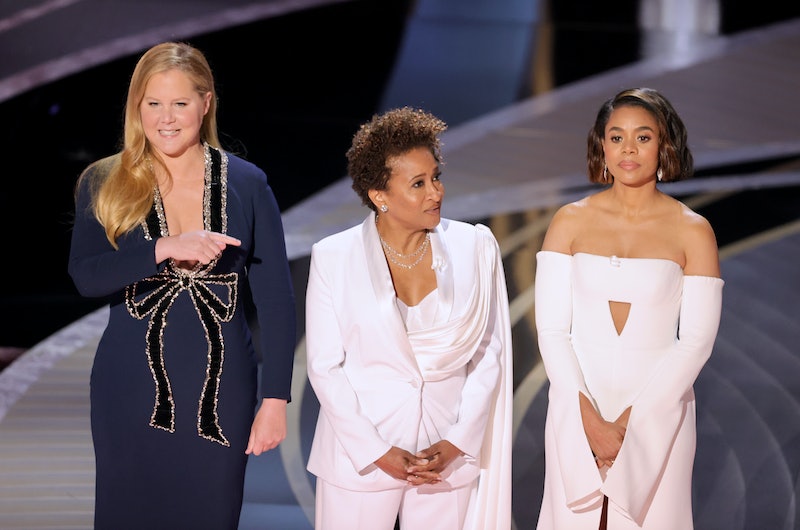 For the first time in three years, the Oscars featured a host — or rather, multiple hosts. The 2022 ceremony featured Wanda Sykes, Amy Schumer, and Regina Hall all joining forces to emcee the show — which meant their Oscars monologue had triple the jokes. It also included an unexpected appearance from DJ Khaled, who interrupted the show to present the hosts “the right way,” which meant the producer hyping up Hall, Schumer, and Sykes while his song “All I Do Is Win” blared in the background. “We the best,” Sykes joked when he exited the stage.

The comedians went after everything from the Golden Globes to the Oscars themselves, joking about the show’s controversial decision to present some awards before the live broadcast and speculating on the reason why they were selected as hosts. “This year the Academy hired three women to host because it’s cheaper than hiring one man,” Schumer said. “I’m representing unbearable white women who call the cops when you get too loud.”

Of course, the hosts also poked fun at Oscar nominees, including this year’s most nominated film The Power of the Dog. “I’ve watched The Power of the Dog three times, which means I’m halfway through it,” Sykes joked. They also didn’t shy from mentioning notable snubs, name-dropping Lady Gaga and Jared Leto from House of Gucci, or as Sykes called it, “The House of Random Accents.”

Sykes, Schumer, and Hall were announced as the 2022 Oscars hosts on Feb. 15, marking the first time multiple women have overseen the proceedings. “We want people to get ready to have a good time. It’s been a while,” the trio said in a statement. Prior to the announcement, other rumored hosts included Dwayne “The Rock” Johnson, Chris Rock, Pete Davidson, Tom Holland, and Only Murders In the Building stars Steve Martin, Martin Short, and Selena Gomez.

More like this
Kimberly J. Brown & Daniel Kountz Looked Back On Their ‘Halloweentown’ Romance
By Stephanie Topacio Long
All The Sneaky Lindsay Lohan Movie Easter Eggs In Her New Ad, Explained
By Stephanie Topacio Long
Howard Stern's Net Worth: Is He The Richest Man In Radio?
By Hugh McIntyre
What Is Ariana Grande's Net Worth? When It Comes To Money, She Has No “Problem”
By Hugh McIntyre
Get Even More From Bustle — Sign Up For The Newsletter