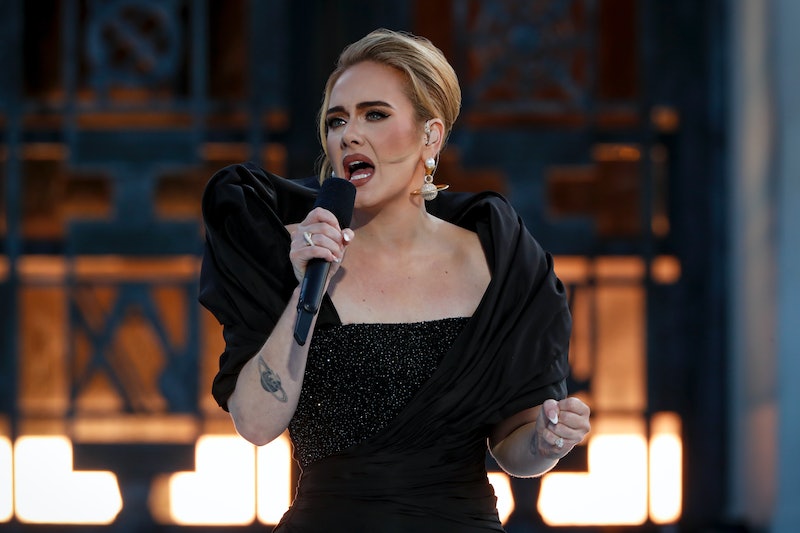 If there’s one thing you can count on Adele for, it’s music to get you through even your most earth-shattering breakups. Adele has taken fans on a journey through her tumultuous love life simply through her music. From her debut album, 19, to her upcoming fourth studio album, 30, the singer has let listeners in on her love-fueled highs, the devastating heartbreak she’s faced, and all of the life events in between, like welcoming her son, Angelo, in 2012.

Most of Adele’s major relationships are immortalized on one of her record-breaking albums, including 2011’s 21 and 2015’s 25, as her love life has provided the fuel for hits like “Rolling in the Deep,” “Hello,” and “When We Were Young.” She promises to continue that tradition on 30, marked by her first new single in over six years, the yearning divorce anthem “Easy on Me.” If Adele’s dating history proves one thing, it’s that men are very useful for causing singer-songwriters to write number one hits that the world can collectively sob to. But don’t be surprised to hear love songs in the future now that she’s in happy relationship with sports agent Rich Paul.

Adele’s first album 19 was primarily inspired by her first-known boyfriend, the identity of whom has still not been publicly revealed today. As she told Rolling Stone in 2009, she wrote “Chasing Pavements” after finding out that he cheated on her. “I went to the pub [where he was] and punched him in the face,” she recounted. “I got thrown out, and as I was running away, the phrase ‘chasing pavements’ came to me.” He also apparently inspired songs like “First Love,” “Cold Shoulder,” and “Tired.”

After Adele blossomed into a superstar following the release of 21, this man apparently felt entitled to a piece of the pie. She told The Sun in 2011 that her ex-boyfriend had the audacity to ask for a cut of royalties that she made from 19. “For about a week he was calling and was deadly serious about it,” she recalled. “Finally, I said, ‘Well, you made my life hell, so I lived it and now I deserve it.’ He really thought he’d had some input into the creative process by being a prick.” Although she rightfully laughed off the request, she did give him credit for something: “He made me an adult, and put me on the road that I’m travelling.”

While “Chasing Pavements” made people take notice of Adele, it was her sophomore album, 21, that catapulted her to worldwide stardom. Fitting to its title, 21 is the biggest album of the 21st century, thanks to record-breaking break-up anthems like “Rolling in the Deep,” “Someone Like You,” and “Set Fire to the Rain” that made the world cry. These songs were inspired by one man who broke up with her after 18 months of dating, with Adele writing “Someone Like You” when she found out he was engaged only a few months after their split. Adele has only ever referred to this man as “Alex” and never confirmed his identity. However, some outlets have reported that she was referring to photographer Alex Sturrock, who worked on her first tour.

In a 2011 interview with Out, she still referred to him as the “love of my life,” saying she’d never forgive herself for not making it work. “We had everything — on every level we were totally right,” she explained. “We’d finish each other’s sentences, and he could just pick up how I was feeling by the look in my eye, down to a T, and we loved the same things and hated the same things, and we were brave when the other was brave and weak when the other one was weak.” However, she changed her tune in a 2012 interview with Vogue, saying the relationship was never going to work, but crediting him with helping her grow. “If I hadn’t met him, I think I’d still be that little girl I was when I was 18,” she said. “And the best thing is, I now know what I want for myself and from someone else. I didn’t know what I wanted before.”

Adele started dating Konecki in 2011, following the blockbuster release of 21. Only a year later, they welcomed their first child, Angelo. Unlike her previous relationships, Konecki wasn’t the direct inspiration of Adele’s next record 25, given that it contains many of her classic breakup anthems. However, Konecki and Angelo did inspire a couple of the album’s more uplifting moments, including “Remedy,” “Sweetest Devotion,” and “Water Under the Bridge.” As she told Rolling Stone, the latter was written out of fear that her relationship with Konecki was getting too serious, “and then getting a bit frightened by it, and then realizing that ‘I think this must be right. This is the relationship that I want to be in for as long as I can possibly be in it.’”

They reportedly tied the knot in secret sometime in 2016. However, Adele only confirmed her marriage during one of her many acceptance speeches at the 2015 Grammy Awards by calling Konecki her husband. She announced it once again during a March 2017 concert in Australia, telling the crowd, “I’m married now. I’ve found my next person.” Sadly, the nuptials were short-lived as it was announced that Adele and Konecki were filing for divorce in April 2019.

Thankfully, her split from Konecki seems to have been her most amicable to date. In an October interview with Vogue, she said they split long before the news went public, but didn’t place the blame on either of them. “Neither of us did anything wrong,” she explained. “Neither of us hurt each other or anything like that. It was just: I want my son to see me really love, and be loved.” Speaking to British Vogue, Adele said Konecki lives minutes away from her and they do regular movie nights with Angelo. “I’d trust him with my life,” she said. “I definitely chose the perfect person to have my child with. That — after making a lot of knee-jerk reactions — is one of my proudest things I’ve ever done.” However, her new album, 30, was written in the aftermath of her divorce, meaning there are more tear-jerkers to come, such as “Love Is A Game,” which she performed during her CBS TV special on Nov. 14.

In an October interview with British Vogue, Adele admitted that she did date around after her divorce, and before she met her current boyfriend. However, their flames died out quickly as none of them could handle the pressure of being seen with Adele. “I did date before Rich, but they hated it,” she said, without naming names. “They’d find it stressful being out or seen with me, which meant that I guarded all of it beyond. It never evolved because we were never experiencing things together.”

After mostly staying single in the aftermath of her divorce, Adele went public with her new beau in 2021, before the release of her new album, 30. In July, rumors swirled that she was dating sports agent Rich Paul after she attended Game 5 of the NBA Finals with him. The singer made their relationship Instagram official on Sept. 19, posting a sweet selfie of the couple taken at the wedding of NBA player Anthony Davis.

Since then, she’s been even more open about her relationship. Adele confirmed that she was dating Paul to British Vogue. “We’re very happy,” she said, before explaining that they went to the NBA Finals together simply because she wanted to have fun. “I didn’t get dragged along to the [basketball game] because that’s his line of work,” she explained. “I was like, ‘We’re going to the game.’” Luckily, neither is scared of going public with their love. “It used to [feel stressful], but it hasn’t been this time because he doesn’t mind,” she explained. “Normally, I think I get scared about it because it’s very emasculating. Really emasculating.”

Speaking to U.S. Vogue, Adele said she had been friends with Paul for years after meeting him at a party. “I was a bit drunk,” she recalled. “I said, ‘Do you want to sign me? I’m an athlete now.’ He’s just so f*cking funny. He was dancing. All the other guys were just sitting around. He was just dancing away.” However, they didn’t actually start dating until earlier this year. “He was always there, I just didn’t see him,” she said. But once they made the jump, Adele said she felt safer and more secure than ever. “I don’t feel anxious or nervous or frazzled,” she explained. “It’s quite the opposite. It’s wild.”

Oprah Winfrey got Adele to talk about Paul during the CBS special Adele One Night Only, and the singer was actually blushing through it. She praised “the easiness” of their relationship and highlighted how Paul is both “hilarious” and “very smart.” Most importantly, however, she noted that this is the first relationship she’s been in where she truly loves herself. That’s helped her reach a more secure place. In the past, she told Winfrey, she felt so desperate to be loved but afraid of being left that she’d inadvertently hurt the other person preemptively.

As is typical with any A-list female pop star, dating rumors have swirled around Adele for her entire career. Of course, they’re mostly not true. In October 2019, it was reported that she had “gone on a few dates” with British rapper Skepta. A year later, multiple outlets reported that Adele and Skepta were officially an item, but she casually dispelled the rumors after her Saturday Night Live hosting stint in October 2020, writing on Instagram that she was “going back to my cave now to be the (single) cat lady that I am!”

However, some media outlets were insistent that they were a thing, with Page Six even claiming Adele was seen with Skepta at a shopping mall in July, just days before she made her public debut with Paul. Thankfully, as she told Vogue, she’s used to brushing off false reports. “It’s been sh*t,” she said about the dating world. “And 99.9 percent of the stories that have been written about me are absolutely made up.”

What Adele has now, however, is very much real, so we all just have to hope she can write as well from a healthy place as she has heartbreak.

This article was originally published on Oct. 27, 2021