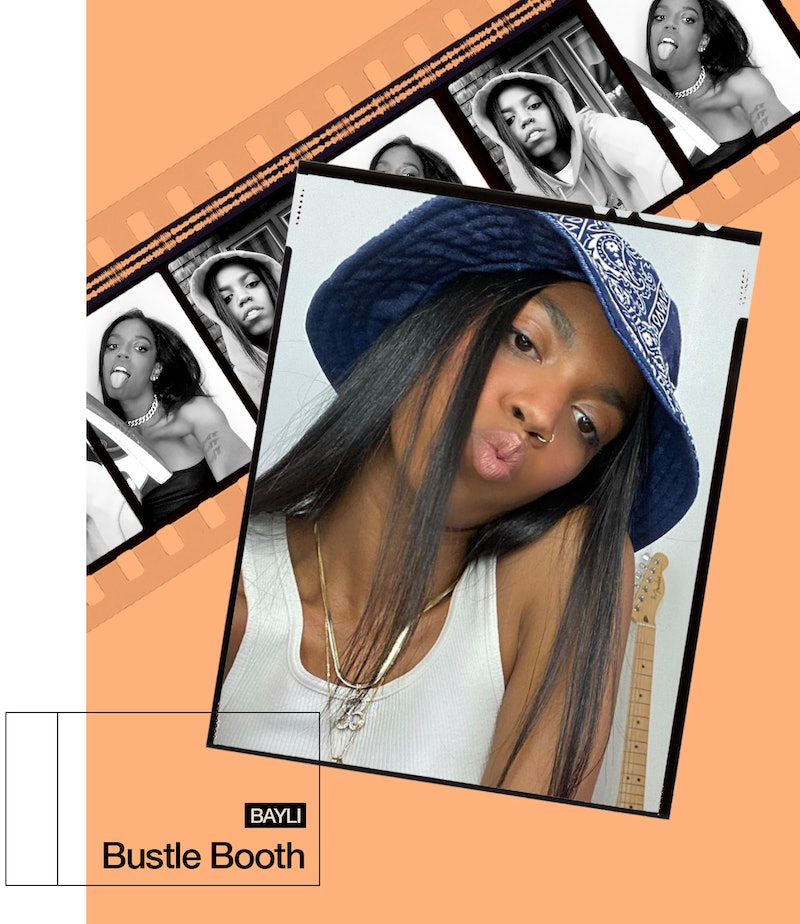 BAYLI’s new EP stories from new york is technically her solo debut, but don’t mistake it for her first music release. The Brooklyn-born musician cut her teeth for nearly a decade as the lead singer of The Skins, a rock band made up of her siblings and close friends that received mentorship from super producer Rick Rubin and toured with Joe Jonas’ band DNCE. The band amicably chose to split up after parting ways with its record label, and BAYLI embarked on her solo journey in 2018. She utilized the creative and professional skills she learned from The Skins to score a songwriting deal with Warner Chappell Music that’s led to collaborations with Justin Tranter, Blu DeTiger, and Jesse McCartney. “Right now, the DMs are crazy. We’re talking to incredible artists in all different genres, from folk to hyperpop,” she tells Bustle. “It would have been challenging to get there in a group of people.”

While she cherishes having complete autonomy over her work, BAYLI admits braving the industry alone has been a challenge. “I’m really a shy person,” she says. “When I used to do interviews with [The Skins], I would throw everyone the questions and be modest in the back. Now it’s really a spotlight on me, and there’s a little pressure there, but I love it.”

BAYLI began working on the “memoir-esque” stories from new york nearly two years ago, and an early, intimate writing session spawned the biographical “16,” a mid-tempo track that details her mother’s ambitious move from the United Kingdom to New York City as a teenager. “It was like any other day,” she recalls of being in the studio with her brother, fellow The Skins alum Reef McKeithan, and frequent collaborator Brody Gillman. After hearing a track they were working on, BAYLI began thinking about her mother’s complex life as an immigrant and mother of four and felt compelled to tell her story. “We had a really close bond, and she had respect for me,” she says. “It’s really helped shape who I am today, where I’m super happy to command space, be an entrepreneur, and take these risks because I saw my mom survive through all of it.”

About a year-and-a-half after crafting the song, BAYLI’s mother unexpectedly passed away. “It shook me to the core. I’m still healing from that. I think I’m always going to be healing,” she says. Following the loss, “16” evolved from a heartfelt story to a touching memorial of her mother’s life written from a place of admiration. BAYLI was inspired to push through the traumatic experience and release it as one of the EP’s singles. “I thought, ‘This is a powerful moment of healing, light, and love,’ and that’s really who my mom was — a strong, really resilient person,” she details. “We knew that ‘16’ was a beautiful song, and I thought it was a great representation of my mom.”

Another standout from the EP’s six tracks is “Foreigner,” a bouncy pop song about a one-night stand with a man who was already in a relationship and visiting New York for his own wedding. “Foreigner” ties the project together with “16,” as both tracks reflect pivotal times in a young person’s life. “It’s cool because [“16”] is my mom’s lens as a 16-year-old, a super brilliant person surviving, and [“Foreigner”] is young me doing dumb sh*t,” she explains. “The stories together create me, a New Yorker who comes from strength and power [and] still makes mistakes, but survives through it all.”

BAYLI has already experienced so many aspects of the music industry, but her ambitions as a solo artist go far beyond her past; she hopes to tour the world, win a Grammy, and collaborate with everyone from U2’s Bono to Azealia Banks. Above all, her main desire is to leave a unique mark on culture. “I really do feel there’s value in having different perspectives out here in the world,” she says. “As a Black woman, as a queer person, as a person at the intersection of all these things, I would love to be there to tell new stories. That’s what stories from new york is.”

Learn more about BAYLI in her Bustle Booth questionnaire, below.

SpongeBob [SquarePants] has to be first. Then Rocket Power.

Uhhhh ... Beyoncé? Oh ya! And Jennie from BLACKPINK.

Naked and Afraid. No! Real Housewives of New York: doing mad boring shit and getting drunk.

“Wait (The Whisper Song)” by the Ying Yang Twins.

I’m constantly inspired by the youth and all the activism and bravery we’re seeing from women leading the protest in resistance to oppression and violence.

That I left them with a special feeling or that I helped open up their perspective about something.

More like this
Lauren Lyle Is Keeping The Contents Of Karen Pirie’s Bum Bag A Mystery
By El Hunt
On 'The Handmaid’s Tale,' Christine Ko Fights Back
By Gretchen Smail
The Spice Girls Just Dropped A Brand New Music Video
By Sam Ramsden
Everything To Know About Taylor Swift’s 10th Studio Album, 'Midnights'
By Grace Wehniainen and Jake Viswanath
Get Even More From Bustle — Sign Up For The Newsletter