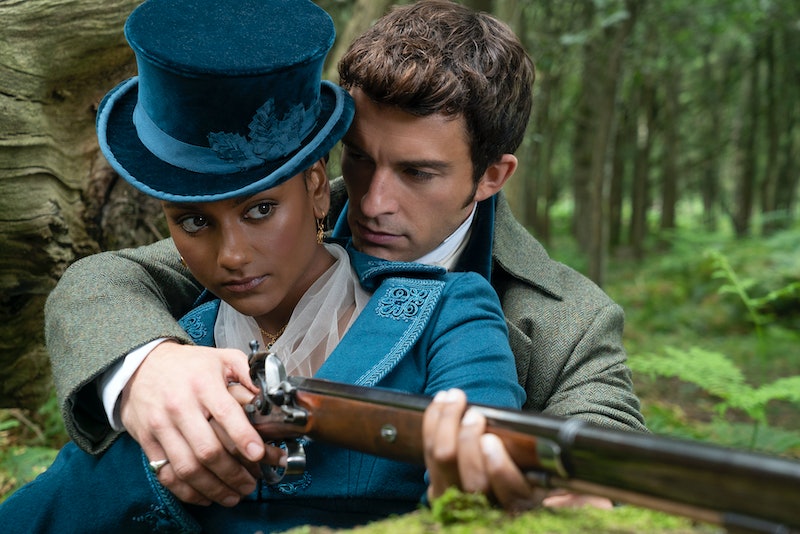 If you’re obsessed with Bridgerton, chances are you also enjoy other 19th-century English romances from throughout literature, too — say Pride and Prejudice, or Wuthering Heights. What is it about brooding, borderline toxic (OK, in Heathcliff’s case, full-on toxic) men that readers and viewers can’t get enough of? Jonathan Bailey, aka Anthony Bridgerton himself, asked himself the same question ahead of Bridgerton Season 2. “It’s interesting to get behind these Heathcliff and Darcy characters and explore why romantic male figures are so harsh and toxic towards women,” he said in a March 20 interview with Radio Times.

Of course, it’s safe to say that audiences are very much into Anthony Bridgerton’s specific brand of swoon. Not only has anticipation for Bridgerton Season 2 been, like, extra palpable, but the Julia Quinn novel on which it’s based, The Viscount Who Loved Me, is the highest-rated Bridgerton book on Goodreads at 4.07 stars.

And if Bailey’s comparison to literature’s most beloved, grumpy heroes has you intrigued, you’re in luck — because he means it. One production still from Season 2 teases a very soaked Anthony, à la Colin Firth in 1995’s Pride and Prejudice miniseries. (Here’s hoping for a moment as dreamy as the 2005 hand flex, too.) And yes, the whole premise for this season — an enemies-to-lovers situation between Anthony and Kate (Simone Ashley) — is sure to ring delightfully familiar for Jane Austen and Brontë sister stans.

Fortunately for us, Bridgerton is not ending anytime soon — at least two more seasons have been confirmed by Netflix — and Bailey is making sure that his onscreen brothers and sisters are ready for their respective outings. Just as Phoebe Dynevor prepared Bailey for Season 2, he told Radio Times he’s put together a notebook for the next Bridgerton in line (that would be Benedict, BTW). “It’s a Bridgerton guide for the next sibling who plays the lead,” he said.

More like this
Regé-Jean Page & Jonathan Bailey Just Had A Stylish 'Bridgerton' Reunion
By Sam Ramsden
Julie Andrews Revealed A Surprising Behind-The-Scenes 'Bridgerton' Detail
By Grace Wehniainen
Who Is 'Umbrella Academy' Star Elliot Page Dating After His Divorce?
By Jake Viswanath
Dan Levy’s Father’s Day Pic Of Dad Eugene Spoofs The ‘Schitt’s Creek’ Vet’s Past
By Grace Wehniainen
Get Even More From Bustle — Sign Up For The Newsletter