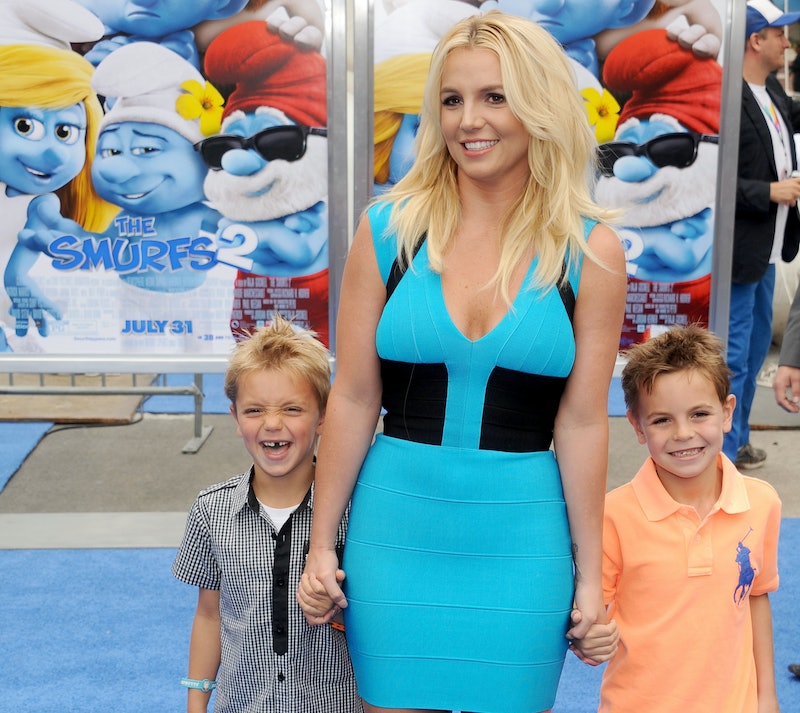 It’s been 15 years since Kevin Federline and Britney Spears’ divorce was finalized in July 2007 — but today, the “Stronger” singer’s ex-husband is discussing their kids, custody, and Spears’ conservatorship. “The boys have decided they are not seeing her right now,” Federline told the Daily Mail in a new interview, referring to the former couple’s teenage sons, Jayden and Sean Preston. “It’s been a few months since they’ve seen her. They made the decision not to go to her wedding.”

Federline also said “it’s tough” for the children to see some of Spears’ social media posts, which the Daily Mail characterized as “nude selfies.”

“I try to explain to them, ‘Look, maybe that’s just another way she tries to express herself,’” he said in the interview, published Aug. 6. “But that doesn’t take away from the fact of what it does to them ... I can’t imagine how it feels to be a teenager having to go to high school.” (According to the outlet, Jayden and Sean Preston live with Federline and his wife, Victoria Prince, with whom he shares two daughters.)

Federline further said he “would absolutely welcome Jamie Spears back in the boys’ lives,” referring to Spears’ father and former conservator — who the “Toxic” singer previously said in court “loved the control to hurt his own daughter 100,000%.” Spears’ ex sees things differently. “I saw this man that really cared, and really cares about his family and wanting everything to be OK,” Federline said. “When Jamie took over, things got into order. He saved her life.”

It wasn’t long before Spears’ new husband, Sam Asghari, responded to Federline’s comments — penning a long message on his Instagram story later that day. In addition to defending Spears’ social media activity — “my wife has never posted a nude selfie except of her butt wich [sic] is quite modest these days,” he wrote — Asghari said it was “irresponsible” to suggest Spears’ sons didn’t want to see her. “The boys are very smart and will be 18 soon to make their own decisions and may eventually realize the ‘tough’ part was having a father who hasn’t worked much in over 15 years as a role model.”

Asghari also called out Federline’s “loyalty” to Spears’ father, writing that “anyone approving of [the conservatorship] is wrong or benefiting from it somehow.”

In a second story post, Asghari said he “wishes [Federline] the best,” and borrowed a term from Will Smith: “Keep my wife’s name.....out your mouth.”

Spears herself responded to Federline’s comments next. “It concerns me the fact that the reason is based on my Instagram ... it was LONG before Instagram,” she wrote on her story. “I gave them everything ... Only one word: HURTFUL ... I’ll say it ... my mother told me ‘You should GIVE them to their dad’ ... I’m sharing this because I can ... Have a good day folks !!!”

The musician expanded on her thoughts in a separate Instagram post, too, saying she was “not surprised” that Federline is speaking out, “just as my family did.”

Spears also responded to a comment from Prince in the Daily Mail interview. “As their step mom says ‘whatever is happening outside this home has nothing to do with this home’ ... I would like to share the DOOR ... to outside is a token to the WHITE GATES I’ve been kept from for 15 years.”

“Reminder that the trauma and insults that come with fame and this business not only affect me but my children as well !!!” Spears added. “I’m only human and I’ve done my best.”

Federline’s interview marks a departure from his behavior during the conservatorship, when he opted to not share his opinions on the ongoing situation. “I think Kevin feels that there seems to be a lot of commotion going on right now, and he trusts that the probate court is going to make orders that they feel are appropriate to protect Britney and her estate,” his attorney, Mark Vincent Kaplan, told Page Six at the time.

More like this
Ed Sheeran’s Surprise Gig Included An Iconic Britney Spears Tribute
By Bustle Editors and Darshita Goyal
Lizzo Twerks While Playing James Madison's 200-Year-Old Crystal Flute Onstage
By Radhika Menon
Everything To Know About Taylor Swift’s 10th Studio Album, 'Midnights'
By Grace Wehniainen and Jake Viswanath
Twitter Is Freaking Out Over Rihanna’s 2023 Super Bowl Halftime Show Announcement
By Stephanie Topacio Long
Get Even More From Bustle — Sign Up For The Newsletter