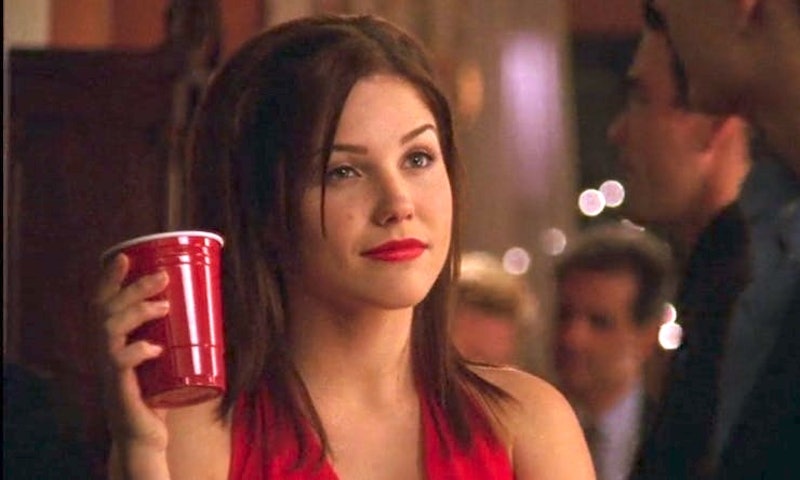 Sophia Bush rose to fame as Brooke Davis in all nine seasons of One Tree Hill, a wildly popular drama series memorably set in fictional Tree Hill, North Carolina. Upon its 2003 premiere, the show initially centered around the lives of half-brothers Lucas and Nathan Scott (Chad Michael Murray and James Lafferty, respectively) as well as their peers and loved ones. Brooke entered the show as the immature best friend of Peyton Sawyer (Hilarie Burton), aka Lucas’ on-again, off-again girlfriend, but she quickly evolved into a smart, savvy businesswoman.

Viewers got to know Brooke at the start of One Tree Hill as a sassy cheerleader and frequent party girl who grew up neglected by her parents. But as the founder of “Clothes Over Bros,” a multimillion-dollar business she launched in high school, Brooke became an intelligent and empowered young adult — which further affects her relationship with her parents, whose interest in her life increases as they find out about her money. Brooke proved herself wise and resilient by the hit show’s 2012 finale, and her arc on One Tree Hill spawned countless one-liners that still resonate with viewers to this day.

Alongside Burton and actor Bethany Joy Lenz (who played Haley James Scott), Bush launched a podcast titled Drama Queens in June, and it features the three One Tree Hill stars discussing each episode and reminiscing on their time on set. “It’s so much fun for us to have an excuse to hang out for three hours a week and also to reclaim our show,” Bush recently told Hollywood Life. On the topic of a potential reboot, she expressed interest but said she’d only do it on her own terms, as the original show featured many sexual situations that’d be deemed problematic today. “I think we have such nostalgia and love and loyalty for our characters, and to be frank, if there was a way for us to do something that wouldn’t further empower the people that were so inappropriate to us then, I’d be open to that.”

All 187 episodes of One Tree Hill are currently available to stream on Hulu, but even if you don’t have time for a full rewatch, these 13 quotes will remind you of exactly how candid Brooke Davis could be.

1. “There’s a day when you realize that you’re not just a survivor, you’re a warrior. You’re tougher than anything life throws your way.”

Brooke endured difficulties in her parental and romantic relationships, and she also survived multiple physical attacks throughout the show’s run. If she says you’re a warrior, you’re a warrior.

2. “At the end of the day, you are who you are, and it’s probably who you’ve always been.”

Considering Brooke’s parents chose to rebuild their strained relationships with her after she began making money, she knows a thing or two about spotting people’s true colors.

3. “People are gonna label you. It’s how you overcome those labels — that’s what matters.”

Resiliency was one of Brooke’s defining traits, and quotes like this one illustrate why she could pick herself up despite life’s unexpected roadblocks.

People around Brooke often underestimated her, but she continuously proved herself to be strong and independent.

Brooke’s love life had its ups and downs, but that’s exactly why she understood the importance of surrounding yourself with people you care about.

6. “First, you’re gonna let go. Now, we’re going to sit, and you are going to cry on my shoulder for as long as you need to.”

One Tree Hill was ultimately a show about friendship, and Brooke was always committed to being a good friend.

Self-acceptance can be difficult, but Brooke was confident in her own skin despite the odds stacked against her.

As a teenage business owner with a troubled home life, Brooke had to grow up quickly, which gave her a strong sense of personal autonomy.

9. “When you stop fighting, you stop living. We all need that thing that’s worth fighting for. Maybe it’s a certain someone, or a special place, maybe just an idea. So find your fight, and fight like hell ’til your battle is won.”

10. “And once you lose yourself, you have two choices: find the person you used to be... or lose that person completely.”

Moving on is rarely easy, but Brooke understood the importance of starting fresh.

11. “If you had a friend you knew you’d never see again, what would you say? If you could do one last thing for someone you love, what would it be? Say it. Do it. Don’t wait. Nothing lasts forever.”

Brooke never shied away from giving advice, especially with this line from the series’ 2012 finale.

Brooke was unabashedly confident and always ready to stand up for her loved ones.

Over its nine seasons, One Tree Hill saw Brooke go from a troubled teenager to a successful mother, wife, and self-made entrepreneur.

This article was originally published on Oct. 7, 2017