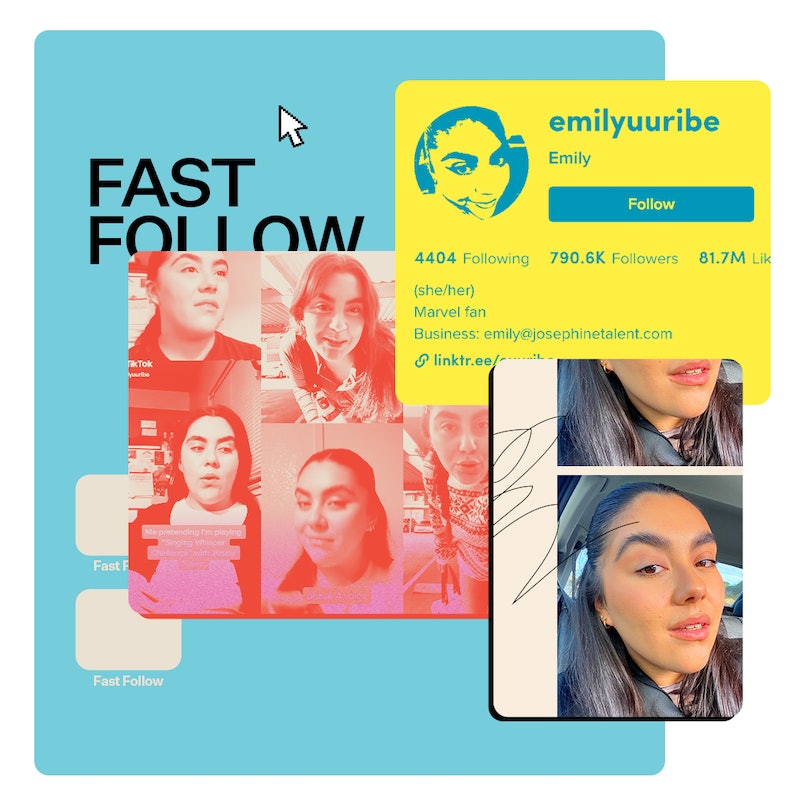 Eternals was a big deal for Marvel fans. And for Harry Styles fans. And for 21-year-old TikToker and student Emily Uribe, whose viral videos imagining life as a celeb earned her an invite to the film’s red-carpet premiere. Though the evening was full of surprises (“I didn’t realize how many wires are on the floor, as weird as that sounds to say”), Uribe’s biggest revelation of the night happened when she returned to her childhood home.

“Being back in my bedroom, I just felt so small,” the Salinas, California, native tells Bustle. After creating hundreds of TikToks emulating the hyper-specific quirks of celebrity interviews — short sketches like, “Me pretending I’m a Marvel actor asked how they received their script on James Corden” or “Me pretending I’m an actress who ‘picked up an accent’ but denies it” — finding herself among A-listers in the actual scenarios she usually mimics online was surreal. “Like, oh my god! That really just happened,” Uribe exclaims. “What do I do?”

The answer, for Uribe, is to go all in. An aspiring actor with a short film under her belt and plans to shoot a sci-fi fantasy pilot this summer, Uribe treats her POVs more as practice than parody (though they’re that, too). “I just want to work. I want to do the work,” she says, sounding a lot like the actors she mimics on TikTok. But until she’s actually sweating out the final rounds of Hot Ones or doing talk show spots with Tom Holland, Uribe will be at home, recording her answers to questions from an imaginary reporter.

Below, Uribe talks her dream role, the follower who made her cry, and Oscar Isaac (for obvious reasons).

I went down a rabbit hole of Oscar Isaac. I saw Scenes from a Marriage. First of all, wow. I don’t think I’ll ever forget that ... I didn’t know him and Jessica Chastain went to school together. There’s pictures of them together at their school, literally students. I went down a rabbit hole of finding out their schools, what they did, student films, down to small interviews, radio shows.

Do you have a go-to comfort interview you rewatch or could recite from memory?

I don’t like watching interviews with my favorite people. I find it to be such an invasion of privacy. I don’t know why. [But] the Florence Pugh Vogue, the 11 meals she eats — I can tell you, I think she ate like a Scotch egg, she ate bubble and squeak, she had tea, she had a Victoria sponge. I watch that interview whenever I’m feeling sad, and I’m just like, oh my gosh, let me turn it up!

Who was the follower you were most excited to get?

Cierra Ramirez from The Fosters and Good Trouble followed me, and I literally burst into tears. As a fellow Latina who wants to act, and do what you do, that meant so much to me.

[And] Bethany Mota. I have adored her since I was a child, and I felt so much nostalgia when I saw she enjoyed what I do.

What’s the best thing you’ve purchased on the internet recently?

A Polaris Funko Pop. I am a Funko Pop collector. She’s like, my dream role in Marvel and X-Men, so hopefully, one day that can be fulfilled. A little manifestation thing. And then I bought an Acne Studios scarf. It’s the best thing. She’s a pretty penny, but she definitely will get me through the winter and spring. She’s gonna do that for me.

What’s the strangest thing you currently have written in your Notes app?

Where I go to school, I’m completely remote, but they still offer gym classes online, so I took pilates. I have in here, “I can perform 30 squats without stopping, I can perform 45 jumping jacks in a minute,” like, I had to write a whole journal in my Notes app.

More like this
Anne Hathaway Shared A "Thrilling" 'Princess Diaries 3' Update
By Darshita Goyal
The 'Scream 6' Trailer Shows Off Hayden Panettiere's Return & Ghostface In NYC
By Jack Irvin and Jake Viswanath
At 28, Rosie Perez Risked Her Career To Stop Playing Stereotypes
By Gabrielle Bondi
Annie Rauwerda Finds Treasure In The Depths Of Wikipedia
By Chloe Foussianes
Get Even More From Bustle — Sign Up For The Newsletter
From hair trends to relationship advice, our daily newsletter has everything you need to sound like a person who’s on TikTok, even if you aren’t.