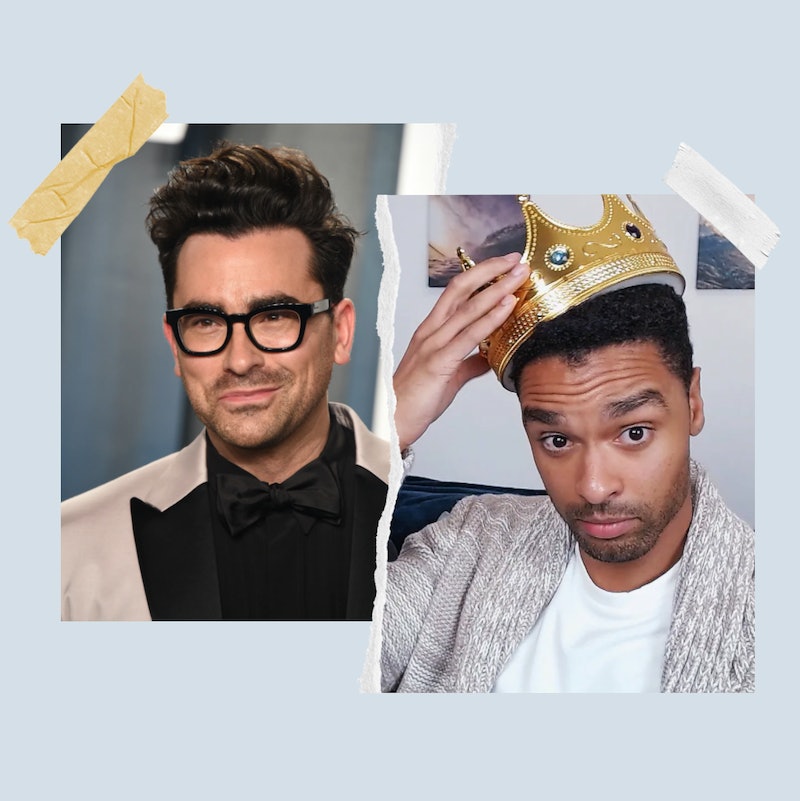 The names of the 2021 Emmy nominees have been revealed, and social media feeds are full of gracious and sometimes hilarious reactions to who made the list. Last year’s admittedly awkward quarantine-style Emmys culminated in a record-breaking year for Schitt’s Creek in the comedy field and the fan-favorite Succession snatching up the prize for top drama. This year, Emmy-winning father-daughter duo Ron Cephas Jones of This Is Us and Jasmine Cephas Jones of Blindspotting announced the nominees along with Television Academy Chairman Frank Scherma.

Leading the nominees this year were streaming hits and other binge-worthy shows, including The Crown (24 nominations), The Mandalorian (24), WandaVision (23), The Handmaid's Tale (21), Saturday Night Live (21), Ted Lasso (20), Lovecraft Country (18), The Queen's Gambit (18), and Mare of Easttown (16). Leading the TV platforms was HBO/HBO Max with 130 nominations followed by Netflix with 129, and Disney+ with 71.

Fellow Bridgerton star Regé-Jean Page, who was grabbed a Lead Actor nomination for his role in the period drama, shared his gratitude with multiple photos he posted on his Instagram, sharing, “It’s a joy to be seen. 12 @televisionacad Emmy nominations for the dazzling group of artists @bridgertonnetflix. Another for dreamy lovers in full technicolour, cause they just don’t make ‘em like @sylvieslove anymore. And 1 happy, tired boy who gets to be a part of it all, Thank you.”

Kaley Cuoco shared her real-time reaction to her nomination for Outstanding Lead Actress in a Comedy Series for her series The Flight Attendant on Instagram. She seemed shocked and voiceless, as she said, “Oh my God!” She captioned the post, “First timer over here thank you @televisionacad for a moment I will never forget. 9 nods for team @flightattendantonmax. Thank you thank you to my entire flight crew!!!! Surreal.”

Jonathan Van Ness also shared a photo with their Queer Eye cast mates on Instagram in honor of their nomination for Outstanding Host for a Reality or Competition Series, saying they were so proud of the show.

Symone, the winner of RuPaul’s Drag Race Season 13, reacted to the show’s nomination. Drag Race has won the competition program category for the past three years.

Billy Porter shared an Instagram post thanking the Television Academy for the Outstanding Lead Actor in a Drama Series nomination.

This Is Us actor Sterling Brown posted on Instagram sharing his gratitude for his Lead Actor in a Drama Series nomination.

Seth Rogen brought out the expletives in response to The Boys getting a nod for Drama Series, a fair reaction since he’s the producer of the superhero series.

Dan Levy who is no stranger to Emmy nominations at this point also shared his delight over being nominated for his SNL guest appearance.

Lin-Manuel Miranda shared a tweet thanking his castmates after being nominated for Outstanding Lead Actor in a Limited or Anthology Series or Movie for Hamilton.

And here's how other celebrities reacted to their Emmy nominations.

Some reactions centered on shows that were previously snubbed or canceled but received nomination honors from the Emmys anyway, including I May Destroy You earning nine nominations after being snubbed by the Golden Globes, and Lovecraft Country receiving 18 Emmy nominations after the show was canceled.

Studios and streaming services are sharing their congratulations as well. Hulu shared its reactions to two of it’s biggest shows Pen15 and The Handmaid’s Tale, receiving nominations, also giving Elizabeth Moss a shoutout for being nominated for Outstanding Lead Actress in a Drama series.

More like this
Everything To Know About The 'Daisy Jones & The Six' TV Series
By Maxine Harrison and Brad Witter
Pamela Anderson’s Dating & Marriage History Could Be Its Own TV Series
By Jake Viswanath
Ashton Kutcher Wants Danny Masterson “To Be Found Innocent” In Rape Retrial
By Jake Viswanath
Here’s Everything Coming To & Leaving Netflix In February
By Jake Viswanath
Get Even More From Bustle — Sign Up For The Newsletter
From hair trends to relationship advice, our daily newsletter has everything you need to sound like a person who’s on TikTok, even if you aren’t.