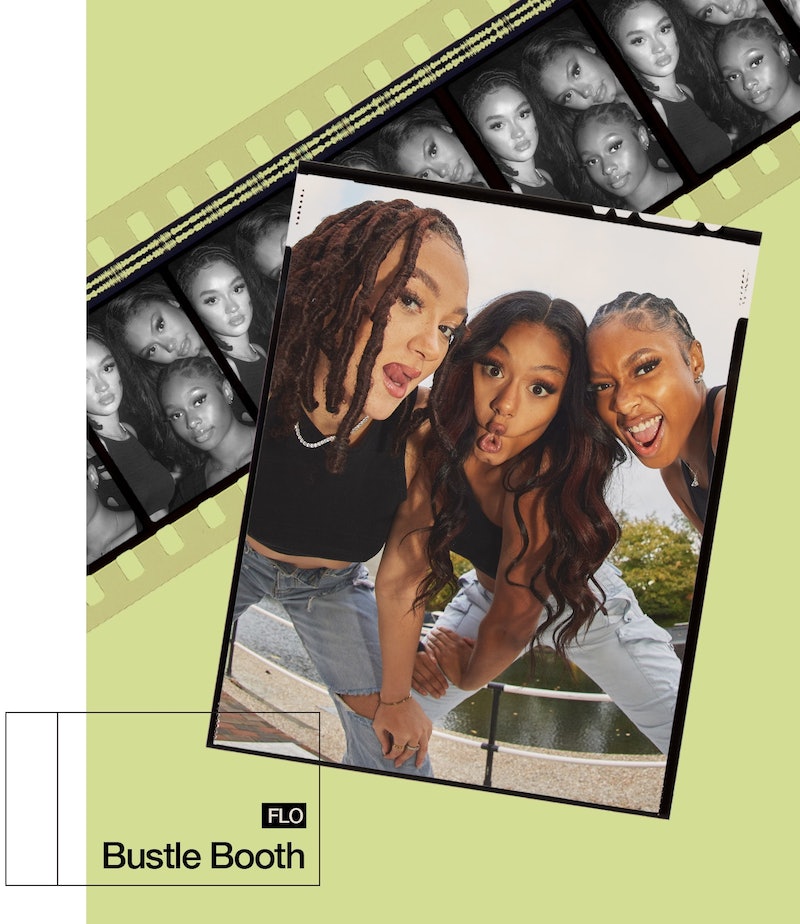 Jorja Douglas, Stella Quaresma, and Renée Downer, aka FLO, weren’t particularly close before forming Britain’s most promising new girl band. “Me and Stella attended the same high school and college, but we weren’t the best of friends,” Downer tells me over Zoom. “I only knew Jorja from social media.” The trio later crossed paths at a record label audition, and it soon became clear their chemistry was palpable. “It felt like putting a puzzle together,” Downer recalls. “We’re super close now. We eat together, do each other’s hair, go shopping. All of those things on rotation, basically.”

After being “put together by management” and signing on the dotted line with Island Records, FLO later dropped their debut EP The Lead featuring the group’s MNEK-produced first single, “Cardboard Box.” They couldn’t be more grateful for the opportunity to work with the Grammy-nominated producer. “MNEK is the most multi-talented person I know. Everything he does is top level,” Quaresma tells me.

The musical stylings of FLO are inspired by the “sick R&B girls” from years gone by. Namely, Mariah Carey and Whitney Houston. Following in the footsteps of the Sugababes, Mis-Teeq, and Little Mix, the girls agree that its time to put an end to the UK girl group drought. “We need that girl band presence on the charts,” Downer shares.

Although, growing up, the girls found greater inspiration from across the pond. “Of course we love the Spice Girls and the Black UK girl groups. But, we’re obsessed with American R&B,” Douglas explains, naming Brandy, Destiny’s Child, and Beyoncé particular favourites.

Looking to the future, FLO are determined to pull off a show-stopping performance at the “Soul Train Awards, the Grammys, or the BRITs,” Downer adds. “I love those big awards show live performances. The staging is always huge and you have a prime opportunity to sing reimagined versions of your favourite music.”

Outside of music, the girls also have their eyes set on broadcasting, fashion, and real estate. “I watch Selling Sunset... they make money,” Quaresma jokes.

Get to know more about FLO in the Bustle Booth below. Jorja Douglas, Stella Quaresma, and Renée Downer

Jorja Douglas: Has to be an iced latte or macchiato with lots of caramel syrup.

JD: Probably Dora the Explorer, but I wasn’t really into cartoons.

JD: I’ve started watching Umbrella Academy, but I’m not quite sure if I’m obsessed with it.

RD: Keeping up with the Kardashians.

JD: The Real Housewives of Beverly Hills, although I’d probably be a maid.

SQ: “Crazy In Love” by Beyoncé.

SQ: That me and Drake are a perfect couple.

RD: That I love Victoria Monét.

SQ: The sun being out!