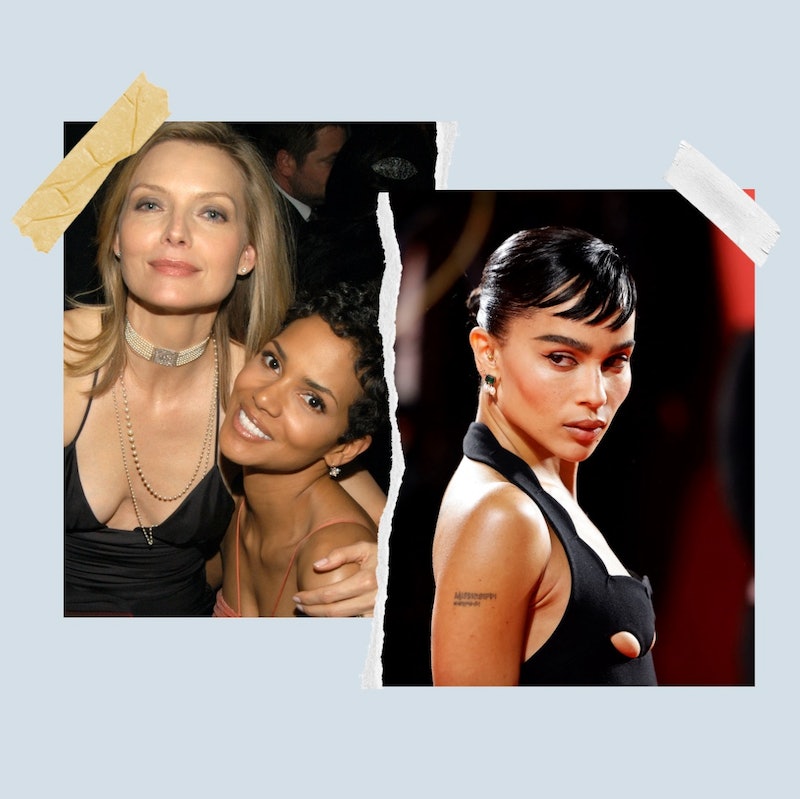 If you’re wondering how Michelle Pfieffer and Halle Berry, who played Catwoman in 1992’s Batman Returns and 2004’s Catwoman respectively, feel about the 2022 film adaptation of the comic book character then look no further than Zoë Kravitz’s latest Instagram post promoting The Batman. Kravitz posted several solo shots of herself as Catwoman as well as photos with Robert Pattinson, who stars as the caped crusader in Warner Bros./DC Comics’ new film.

The former Catwoman stars were quick to show their support. “❤️🔥🙌👏,” Pfieffer replied, while Berry wrote, “Yasssssss!!! can’t wait…. meow!” Kravitz responded to both with a series of cat emojis. Fans noticed this interaction, with some referring to the trio as “squad,” while others asked for the three to hang out IRL. Several fans also said they were waiting for Anne Hathaway, who played Catwoman in 2012’s The Dark Knight Rises, to chime in.

When Variety first reported in October 2019 that Kravitz would be the new Selina Kyle, Hathaway congratulated her. “The biggest congrats to @zoeisabellakravitz on landing the role of a lifetime,” Hathaway wrote. Well, one life anyway...⁣⁣Enjoy the ride, Selina 💋 #Catwoman.”

Hathaway previously encouraged Kravitz to bring her own interpretation of Catwoman to the new film. “If I had any advice it would be literally don’t listen to anybody because I think the only way to play that role is to give your version of it,” Hathaway told Collider in 2019. “All of us had different directors and all of our interpretations were specific to the films that they were in. Your job is to give yours. And I’m so excited to see what she does with it. I thought she was a perfect choice.”

In an interview with Pop Culture on Feb. 2, Berry echoed Hathaway’s message. “Just be courageous and bring her own interpretation to the role,” Berry said. “I think she’s going to be an amazing Catwoman. And I can’t wait to see what her interpretation of that is.”

This isn’t the first time that Kravitz is channeling her inner superhero. She voiced Catwoman’s character in The LEGO Batman in 2017. Both Pattinson and Kravitz have already received rave reviews on their performances in The Batman. Taylor Swift shared her obsession with Kravitz in a recent Instagram story where she called her “THE CATWOMAN OF DREAMS” and added “The Batman was PHENOMENAL!!!” Meanwhile, David Sims of The Atlantic wrote, “Never have I seen the Dark Knight grimace with such fervent intensity.” The Batman had the second highest-grossing pandemic debut, following Spider-Man: No Way Home, with $128 million.

While Catwoman is often portrayed as bisexual in the comics, that sexuality hasn’t been depicted on the big screen until now. The Big Little Lies star told Pedestrian that she interpreted Selina Kyle as bisexual and that there’s some sort of “romantic relationship” with Catwoman and her friend Anika in The Batman, and the film’s director Matt Reeves agreed.

“In terms of her relationship with Anika, I spoke to Zoë very early on and one of the things she said which I loved was that: ‘She’s drawn to strays because she was a stray and so she really wants to care for these strays because she doesn’t want to be that way anymore, and Anika is like a stray and she loves her,’” Reeves told Pedestrian. “So I don’t think we meant to go directly in that way, but you can interpret it that way for sure. She has an intimacy with that character and it’s a tremendous and deep caring for that character, more so than a sexual thing, but there was meant to be quite an intimate relationship between them.”

More like this
Everything You Need To Know About The 'Knives Out' Sequel
By Grace Wehniainen
What Does The Presley Family Think Of 'Elvis'?
By Arya Roshanian
Chris Hemsworth Joked That Baring His Butt In ‘Thor: Love And Thunder’ Was A “Dream”
By Brad Witter
Photos Of The 'Elvis' Cast vs. Their IRL Counterparts Will Have You All Shook Up
By Grace Wehniainen
Get Even More From Bustle — Sign Up For The Newsletter