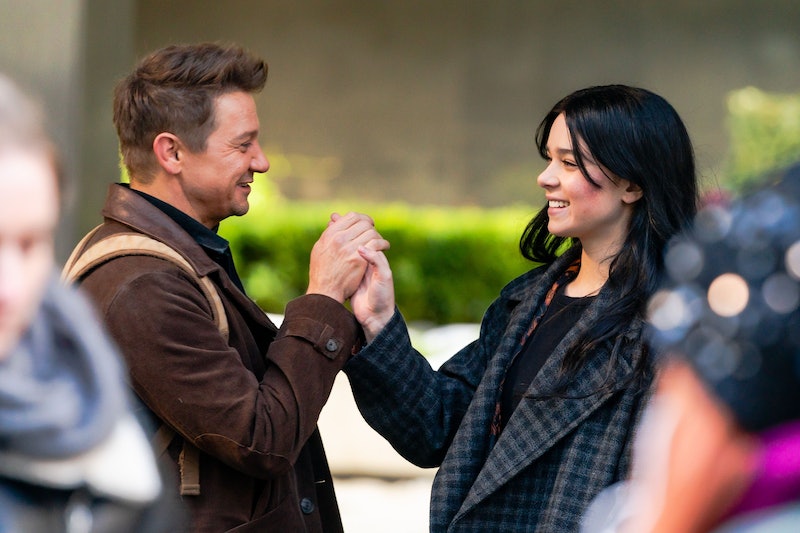 From the chaotic thrills of Loki to the highly anticipated release of Black Widow, it’s been a busy summer for Marvel fans — one of Easter egg hunts, cliffhangers, and theories galore. Even though there’s a Loki Season 2 on the way, and an intriguing adventure in the form of the animated What If...? this summer, you’re probably still pining for your next chance to delve into the Marvel Cinematic Universe. Fortunately, the Hawkeye TV show on Disney+ is one of many exciting projects to look forward to.

Arriving later this year, the series will follow Clint Barton and fellow archer Kate Bishop, a “strong-willed” figure from the comics “who uses her excellent marksmanship to fight against evil,” according to Marvel. The series will be the first time viewers have seen Hawkeye in action since the events of Avengers: Endgame — and after that tense Black Widow post-credits scene, there’s good reason to be worried about the Day One Avenger. Here is everything we know about the Hawkeye show, from its cast to possible plot, release date, and more.

Who’s The Cast Of The Hawkeye Show?

In addition to original Hawkeye actor Jeremy Renner (who made his on-screen debut in 2011’s Thor before starring in Avengers a year later), Hawkeye will introduce Dickinson star Hailee Steinfeld as Kate Bishop. Variety reported that the series will feature a “pass the torch” dynamic between the pair. Also confirmed to star in the series are Vera Farmiga as Eleanor Bishop (Kate’s mom), Fra Fee as a villain named Kazi aka Clown, and Tony Dalton as Jack Duquesne aka Swordsman — an old mentor to Hawkeye but not necessarily a hero.

Alaqua Cox also joins the cast as Maya Lopez aka Echo, a deaf fighter of Cheyenne descent whose hero name comes from her ability to mimic others’ combat techniques. Zahn McClarnon will play her father, William Lopez, and Brian d’Arcy James will appear in an unspecified role, per Variety.

Though not officially listed on the Marvel website for the series, Florence Pugh may also be joining the show, according to Variety, reprising her role as Yelena Belova from Black Widow. While viewers will surely be glad to see the well-received character, Clint might not be — since during the Black Widow post-credits scene, Yelena was approached with the prospect of killing Clint to avenge her sister’s death on Vormir (one the archer, we know, tried extremely hard to prevent).

What Is The Plot Of The Hawkeye TV Show?

Compared to the magic of Loki, Hawkeye appears to be a return to a more down-to-Earth side of the MCU — as Renner put it at 2019’s Comic Con, the Hawkeye mantle is a “superhero without superpowers.”

“What I get to do in the show, ultimately, is shepherd an amazing character,” he explained, “to be ... a better version of me.” Though Disney+ hasn’t shared specific plot details, production photos point to much of the action happening in New York, which is Kate Bishop’s territory in the Marvel Comics.

Is Kate Bishop Hawkeye In The Marvel Comics?

Kate Bishop was first introduced in 2005’s Young Avengers No. 1 — a girl from a wealthy New York family, she stepped in to save the day when the young heroes fumbled a hostage situation at a wedding. The skilled fighter decided the team could use her support and ultimately joined alongside Cassie Lang, Ant-Man’s daughter. Weirdly enough, the Young Avengers team (whose roster has included Billy and Tommy from WandaVision, Eli Bradley from The Falcon and the Winter Soldier, and Kid Loki from Loki) also featured a hero called Iron Lad who was literally a version of Kang the Conqueror. It’s an interesting group, to say the least.

Kate’s boldness and technique (she took up self-defense after being attacked in Central Park), impressed Captain America so much that he granted her the title of Hawkeye when Clint himself was away — but she kept it upon his return and eventually joined him as a partner.

On July 29, Entertainment Weekly shared the first sneak peek at Kate and Clint’s dynamic will look like, and it’s officially time to get excited.

Is There A Trailer & Release Date For The Hawkeye Marvel Series?

Disney+ previously announced that Hawkeye would premiere on Nov. 24 — and that’s still the plan, but there’s a fun twist. Along with a new teaser released Oct. 14, Disney+ revealed that the first two episodes would drop on Nov. 24, not just one. That approach happened only once before, with WandaVision.

The first trailer dropped Sept. 13, and showed Clint tracking down Kate, who was posing as his Endgame persona, Ronin. But it doesn’t take long for them to team up and take down criminals during the most wonderful time of the year. Also, there seems to be hope fans may get to see a Marvel musical after all — even if it’s just glimpses of a hypothetical Steve Rogers Broadway show. (The new teaser suggests that Clint brought his kids to the Big Apple specifically for the show, but he doesn’t look particularly impressed with its version of events.)

This post will be updated with additional plot details as more information on Hawkeye becomes available.