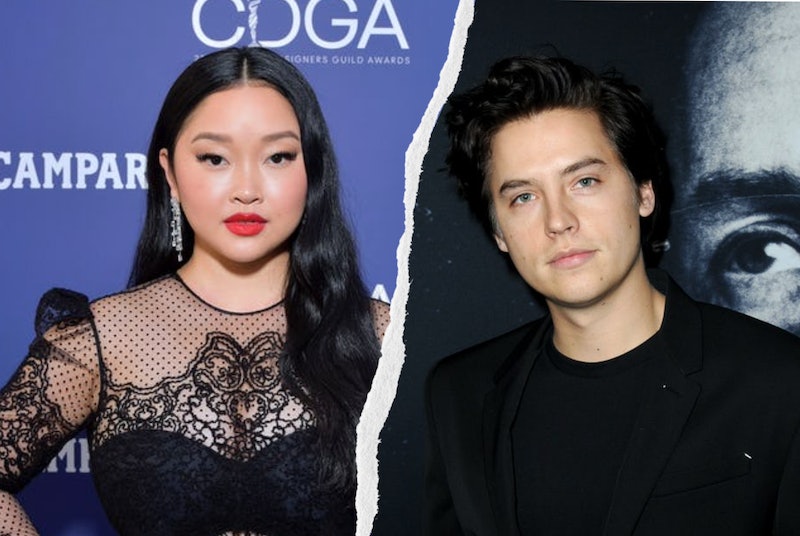 Considering The CW’s Riverdale and Netflix’s To All the Boys film franchise are two major streaming hits among young adult viewers, it only makes sense for the stars of both projects to join forces for new streaming content. Cole Sprouse and Lana Condor are set to star in a forthcoming romantic comedy titled Moonshot, produced by New Line for HBO Max, according to Deadline. The science-fiction romantic comedy also features actors who’ve appeared in Scrubs, Booksmart, and The White Lotus, and it’ll see them all travel to a fully colonized Mars — meaning Elon Musk’s dreams have come true in the film’s universe.

Shortly following Moonshot’s announcement in April 2021, both stars took to social media to express their excitement. “I’m the last person you want to be trapped on a spacecraft with,” wrote Sprouse in a since-deleted Instagram post. “The timeless Lana Condor and I are making a movie on mars...or at least Atlanta.” On Twitter, Condor quoted a tweet from Deadline announcing the film and wrote, “Let’s goooo!!!” Here’s everything you need to know about Moonshot, including its plot, cast, release date, and trailer.

Directed by Chris Winterbauer and based on a screenplay by Max Taxe, Moonshot takes place in a fictional future where Mars is able to support human life and is now inhabited by the individuals who’ve been deemed humanity’s finest. Condor stars as Sophie, a hardworking college student whose long-term boyfriend moved to Mars for his dream job. Sprouse portrays Walt, an easygoing coffee shop employee who strikes up a friendship with Sophie.

After Sophie signs up for a 35-day Mars-bound voyage to visit her lover, Walt sneaks onto the spacecraft — and pretends to be her boyfriend in order to avoid getting outed as a stowaway. According to the film’s trailer, it seems Sophie’s relationship begins to turn sour, leading her to form an actual romantic bond with Walt during the out-of-this-world adventure.

In addition to Sprouse and Condor in the film’s leading roles, Mason Gooding (Booksmart, Scream) stars as Sophie’s Mars-residing boyfriend, Calvin. Comedian Michelle Buteau (The Circle) will appear as the spaceship’s leader, Captain Tartar, and other characters include Emily Rudd (Fear Street) as Ginny, Lukas Gage (Euphoria, The White Lotus) as Calvin Riggins, and Christine Adams (Black Lightning) as Jan. Zach Braff (Scrubs) plays a currently unknown role in the film, though he’s seen offering advice to Sprouse’s character in the Moonshot trailer.

For Sprouse, Moonshot will mark his first film role since 2019’s ahead-of-its-time Five Feet Apart, in which he played Will, a young patient with cystic fibrosis who enters a relationship with a fellow patient named Stella (Haley Lu Richardson). Due to guidelines set by their doctors, the two must keep a safe distance from each other (sound familiar?). Released in March 2019, a full year before social distancing became the norm, the film was a success, grossing more than $91 million worldwide.

In Condor’s case, Moonshot will be her first starring role since completing the trilogy of To All the Boys films following the release of Always & Forever earlier this year. Additionally, she’s slated to star in and executive produce a comedy series for Netflix titled Boo, Bitch from the creators of MTV’s Awkward and Netflix’s On My Block. Over eight episodes, the series will see the actress portray a high school senior who’s lived a safe, low-key life but decides to change course and start living epically. It’s like Booksmart, but with a major twist: After making her decision, she wakes up as a ghost.

Nearly a year after the initial Moonshot announcement, HBO Max unveiled the movie’s first official trailer on March 11. Soundtracked by Coldplay’s “My Universe,” the clip promises lots of high-tech gadgets and potentially claustrophobic spacecraft scenes, as well as Sprouse and Condor exploring the final frontier firsthand.

Alongside the trailer’s release, the streaming platform revealed Moonshot will premiere March 31 exclusively on HBO Max, meaning viewers can dive into the space-bound adventure very soon.

More like this
Here’s What Happens To Bill & Frank In 'The Last Of Us' Video Game
By Brad Witter
Here’s Everything Coming To & Leaving Netflix In February
By Jake Viswanath
The 'Scream 6' Trailer Shows Off Hayden Panettiere's Return & Ghostface In NYC
By Jack Irvin and Jake Viswanath
'The Last Of Us' Star Bella Ramsey Almost Didn’t Take The Role Of Ellie
By Grace Wehniainen
Get Even More From Bustle — Sign Up For The Newsletter
From hair trends to relationship advice, our daily newsletter has everything you need to sound like a person who’s on TikTok, even if you aren’t.

This article was originally published on April 28, 2021