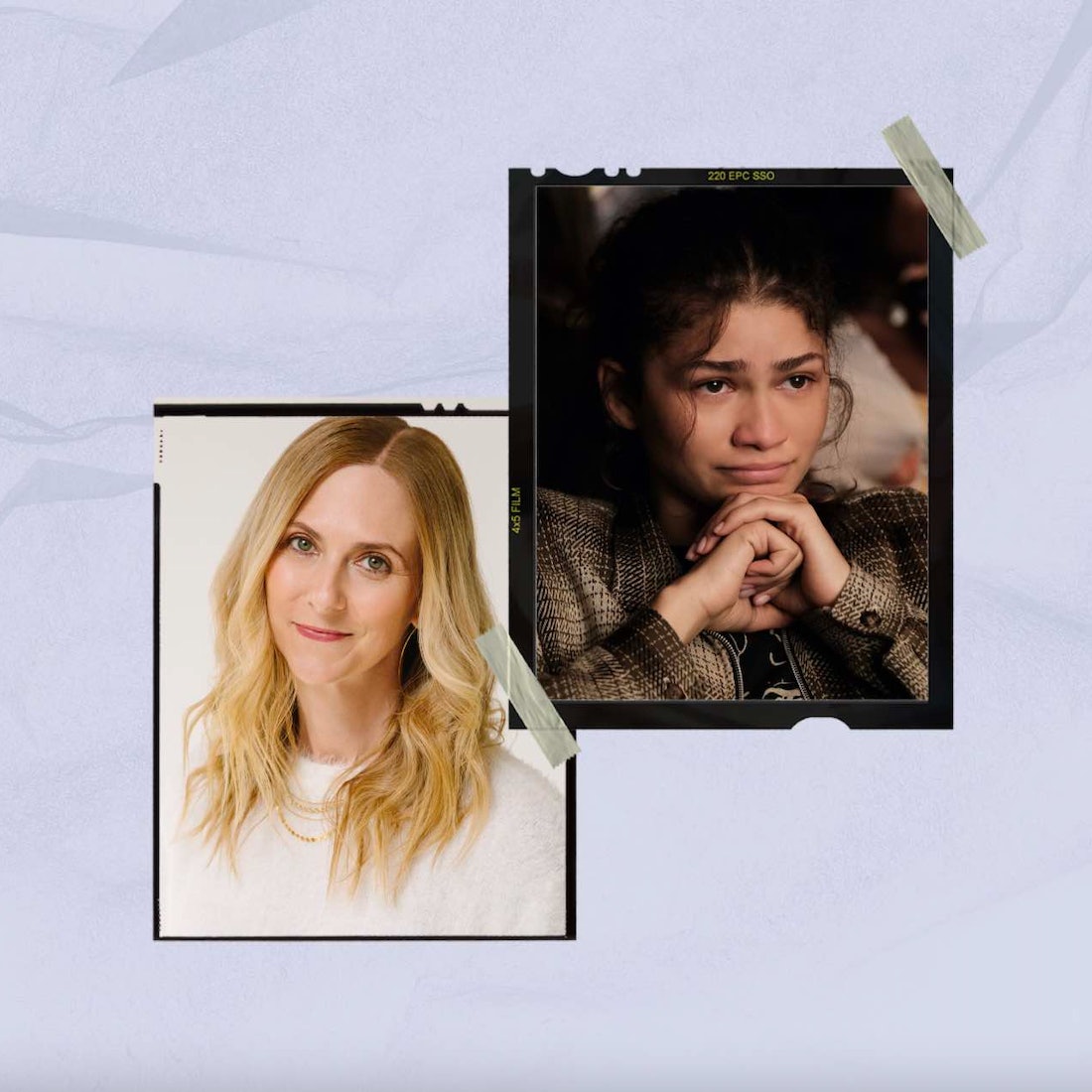 Jen Malone wants you to know her job as a music supervisor requires more than the ability to make dope playlists. As part of the Emmy-nominated all-women music supervision team at Black & White, she’s not only responsible for curating film and TV soundtracks for Zola, Euphoria, Yellowjackets, and Atlanta, but also all the meticulous accompanying work. A music supervisor’s daily tasks include liaising with record labels to clear song rights, negotiating pay rates with songwriters, ensuring they’re aware of how their music will be used within a project, and coordinating everyone for onscreen performances — all of which can change last-minute based on a director’s vision.

If Malone’s job were as easy as some viewers perceive it to be, she probably wouldn’t have had to return to interning when she was 30 years old to learn the craft. More than two decades ago, Malone entered the music industry as a publicist for rock bands, but she soon burnt out and found solace in teaching Ashtanga yoga. The pivot led to a job as Lululemon’s marketing manager, which lasted for two years until the Great Recession hit in the late 2000s. “Very unexpectedly, I got fired,” Malone tells Bustle.

With a mortgage to pay and no creatively fulfilling work in sight, she soon took a position at a nearby cafe, where she thought she’d be making coffee and forging friendships with customers. But once she was placed at the dishwashing station, Malone wanted to quit. Around the same time, she went to see 2008’s Iron Man in theaters and was blown away by the film’s use of AC/DC’s “Back In Black.” She spotted music supervisor Dave Jordan’s name in the credits, and a light bulb went off in her head. “I knew nothing about what a music supervisor did,” she admits. “I was just like, ‘That seems fun.’”

Holding little to no knowledge about the position, she serendipitously met Jordan and subsequently worked as an intern for his company, Format Entertainment, when she was 30. Three days into another internship for ViacomCBS, Malone was hired as a music supervisor on several MTV and VH1 reality shows, including Are You The One?. “People don’t necessarily realize where I came from,” she says, recalling her humbling experience as an adult intern. “We had to introduce ourselves and say what our major was, [and I was] like, ‘I am not in school anymore.’”

It’s not just sitting around doing these fun deep-dives into playlists, because you can have the most perfect song in the world, but if you can’t clear it, you can’t use it.

Fast forward to today, and along with the rest of the Black & White team, Malone is currently working on the music for Paramount+’s The Offer, Netflix’s Umbrella Academy and Wednesday, AMC’s Kevin Can F… Himself, Peacock’s Queer as Folk reboot, and John Wick: Chapter 4, among other high-profile projects.

Before getting into scripted TV, you worked as a music supervisor on MTV and VH1 reality shows. What’s different about working in that realm compared to projects like Euphoria and Umbrella Academy?

Reality TV is a grind. There is so much music in a reality television show that’s not necessarily the cool, sexy [music featured in] Euphoria, Yellowjackets, The Offer. On all of my reality shows, we didn’t have a composer, so we’re working with the editors to actually compose the score, because there’s always music running underneath. We also have a very, very, very, very limited budget — if a music budget at all — for artists’ needle drops. It was very, very different. Obviously, I wanted to get into scripted, because that’s where the sexiness is, but the experience I had on reality TV was priceless. It was like a music supervision boot camp.

It sounds like the hardest, most intense version of the work you’d later do on narrative TV shows.

Except Euphoria, but that’s a different story.

Just for the sheer amount of songs?

Yeah. Our shooting schedule also is really insane because of COVID, and then Sam would make revisions to the scripts where he would add songs, which we’d find out they shoot two days later. [Rue rapping “Hit Em Up” by] Tupac was not necessarily in the script from the beginning.

That cannot be an easy song to clear.

No, no. There are definitely easy songs to clear, but for the most part, it’s a lot. It’s 37 songs for an episode. You have to clear all the masters, all of the publishing, in which some of the [songs] had 10 different writers, so I had to go to 10 different people, get them all to agree to a price, and make sure they’re all OK with the scene content. I say I look for d*ck and drugs when I’m screening the episodes, because those are always the red flags. It’s not just sitting around doing these fun deep-dives into playlists, because you can have the most perfect song in the world, but if you can’t clear it, you can’t use it.

It’s way more than some people may assume you’re in charge of.

I have to manage the budget and collect all the assets. We want this show to always sound as amazing as it can, and to do that, we need the high resolution files, we need lyrics, we’re making sure the promo team has what they need. It’s insane. I’m the head of the music department of a huge show where music is a character.

What song has been the most difficult to get cleared?

The opening sequence of [Fezco’s] Grandma was very difficult because of the content, and because we were using catalog [songs]. If it was a newer artist, it would’ve been a much easier approval.

Finding the Sharon Cash [“Fever”] master owner was very difficult [because the record label it was released through, Mother’s Records & The Snarf Company,] was only in existence for two years in the late ’60s. I had to find its heirs, and then have them go to the vault to get the tape and make a WAV file, so it can sound good. Once I finally found them it was easy, but finding them was difficult.

Music plays such a heavy role in so many of the shows you work on — including Atlanta, Yellowjackets, and Euphoria — but each of those series is rooted in completely different genres. How do you keep yourself well versed in such different types of music, especially ones you might not be particularly drawn to?

It’s almost like music research. It’s not researching rights per se, but it’s putting together pieces of the puzzle, like, “This band toured with this band who’s from here.” I enjoy going down the rabbit holes and researching genres I might not know, like, “Who were the DJs? What are the [radio] stations, and where are their playlists?” But remember, that is only maybe 30% of my job.

What would you say makes up the biggest part of your job?

Everything else that goes into a show, like clearing music when there’s a performance [onscreen], whether it’s karaoke, or “All For Us” [from Euphoria], for example. It was a six-week thing where we had to cast the marching band and get an arrangement made featuring the instrumentation Sam wanted to see on camera. I had to find a vocal arranger for the choir parts, schedule [Zendaya] into the studio, work with the marching band director, Sam, and the choreographer, and then schedule all of the players to come in. I’m making sure we got exactly what we wanted from the choir, getting that arrangement made, and dealing with all the SAG paperwork.

On Euphoria, you’ve highlighted many new and emerging artists like Megan Thee Stallion and Baby Tate in Season 1, and Laura Les of 100 gecs in Season 2. Have you received feedback from any artists about how a film or TV placement has affected their career?

Yes. I love hearing that, and I love passing it on to our showrunners and producers, because this is all music we believe in. When it connects to the audience on the level it has on Euphoria, that’s very special. With Laura, it exploded. She was trending on Twitter, which was so exciting.

There’s a song in Atlanta at the end of Season 3 Episode 2 [called “At the Hotel”] by Eunice Collins, and she hasn’t been synced a ton. I’m very close with the label that has her catalog, and [they told me] she’s so happy it’s being introduced to another audience. The impact our little show has on other people, whether it’s a legacy artist like Tupac or Billy Swan, or Laura Les, or an unknown artist like Eunice Collins, it’s one of the best parts about my job.

“Elliot’s Song” from the Euphoria Season 2 finale sparked a little bit of controversy for how much time it took away from the pressing plot points in the finale. How involved were you in the process of creating that song and including it in full, and what did you make of the audience feedback?

Labrinth had a studio on set this season, and everybody loved hanging out there, because you’re inspired just by being in the room with him. Everybody would go in, and I know Sam wanted [Dominic Fike, who plays Elliot] to perform a song. That’s how that happened, but the editorial choice [to include the full track] was from Sam and the editors.

As far as the reaction, I mean, whatever. Some of their reactions about how Lexi would never be listening to Laura Les, I’m like, give me the reasons why she wouldn’t be. On a narrative level, it really foreshadowed what Lexi was going to develop into with her confidence level and putting on this extremely controversial play.

And the sh*t we got about the high school party, and having all the throwback [songs], it makes no sense. Why wouldn’t [the characters] be listening to an iconic song by Juvenile or Notorious B.I.G.? If kids are not listening to that at parties, then their parties are f*cking lame. I know you’re going to quote that, but that’s fine. The songs are chosen based on how they tell Sam’s story, and we’re lucky it does make an amazing playlist, but it’s not really about that.

When you were transitioning from PR to music supervision, was there ever a moment you felt ready to give up, and how did you get through that?

I never wanted to give up, but there were definitely days where I was very overwhelmed with how much I needed to learn. I wanted to learn really quick so I could start working, in the same way when I was in college, I just wanted to f*cking graduate so I could start working. I never once was like, “This is too hard.” I knew it was hard. Doing anything in the entertainment industry is hard, but there was not a moment where I doubted myself.

Now, you’ve been nominated for Emmys and won awards from the Guild of Music Supervisors. Can you pinpoint a moment where you felt like you made it?

Whether it was working on Atlanta Season 1, and then Atlanta Season 2, and the Emmy nomination, it’s all been unbelievable. I try to stay in a place of gratitude, especially because of where I came from. Before I went to see Iron Man, I was washing dishes at a cafe in Boston, literally during brunch. Working on bigger shows, and shows where music is so important, it’s all been amazing. I don’t want to say I never dreamed about it, because I did. It means more to me than anybody could ever realize, because of where I came from.