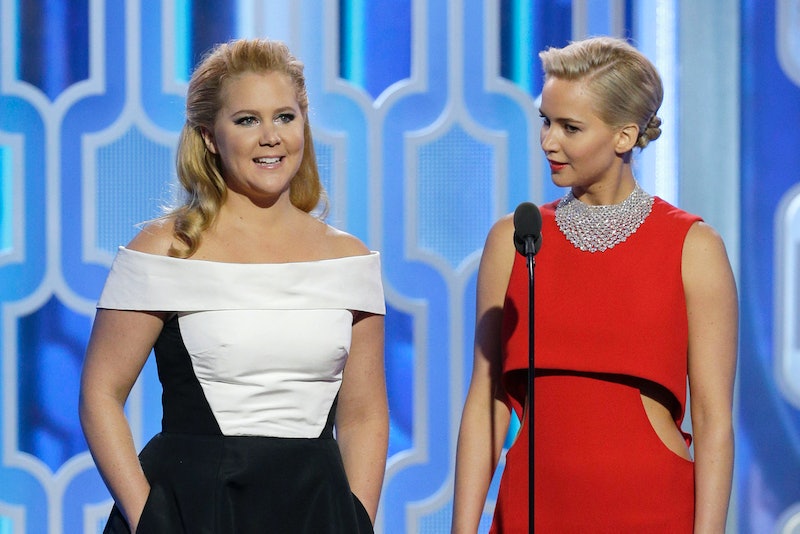 The Women’s March Rally for Abortion Justice on Oct. 2 saw people assemble across the country in opposition to the restrictive abortion ban in Texas — and among the masses were several famous faces. On the West Coast, Debbie Allen and sisters Patricia and Rosanna Arquette were just a few of the voices speaking out for reproductive rights in Los Angeles. In New York, friends and fellow actors Amy Schumer and Jennifer Lawrence joined the crowd to share their own important messages: Schumer held a sign that said, “Abortion is essential,” while Lawrence’s read, “Women can’t be free if they don’t control their bodies.”

Schumer captured the experience on Instagram, and also shared a photo of herself on stage via her story. In the caption to her Oct. 2 post, the I Feel Pretty star made an important point about reproductive rights. “I don’t have a uterus and she is pregnant but we out here,” she wrote. Schumer, a mom of one, just had her uterus removed in September due to endometriosis, and Lawrence, for her part, is currently expecting her first child alongside husband Cooke Maroney. However, as Schumer’s caption made clear, the demand for abortion rights is as universal as it is essential.

Twitter user _lawrencepedia_ shared another photo of the women posing together during the rally — this time, with Schumer holding a sign that read, “Make abortion safe + legal for all,” in front of the New York State Supreme Court Building.

And user sabrijjijna posted a brief clip of the women walking through the crowd at the event. “I WAS STARSTRUCK,” they wrote.

Schumer and Lawrence have been good friends for a while now — and even penned a film script together, which seems to still be in development. In 2018, the Oscar-winning Silver Linings Playbook actor told Andy Cohen that a table read had been done and the project needed a director.

In the meantime, it’s just good to see the duo come together again for such an important cause. Texas’ Senate Bill 8 bans “almost all abortions” and permits legal action against anyone who helps someone else get an abortion, as The New York Times reports. Fortunately, there are things you can do to support abortion rights in Texas — including donating to local abortion funds and volunteering your time, even if you don’t live in the state. As Rio Grande Valley-based youth activist Cathy Torres told Bustle in September, “Bills like these are framed to purposely spread misinformation, making people believe that abortion is illegal when it absolutely is NOT.”

More like this
5 Wild Theories About Miley Cyrus’ “Flowers” Music Video
By Jake Viswanath
Kim Petras Just Made Grammy History
By Jake Viswanath
All The Best Celebrity Reactions At The 2023 Grammys
By Brad Witter
Lizzo Calls Beyoncé “The Artist Of Our Lives” During Her Grammys Speech
By Alyssa Lapid
Get Even More From Bustle — Sign Up For The Newsletter
From hair trends to relationship advice, our daily newsletter has everything you need to sound like a person who’s on TikTok, even if you aren’t.