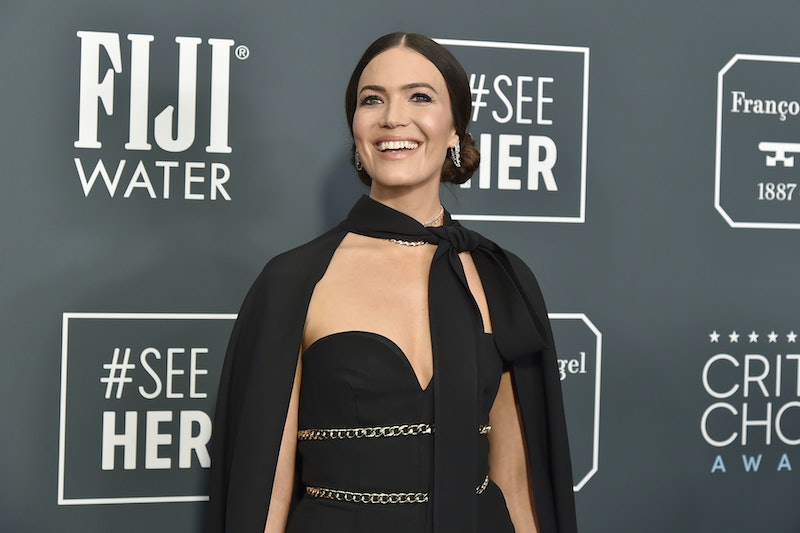 The chaotic state of the world aside, Mandy Moore is having a pretty good year so far. She's starring in the fifth season of NBC's ultra-successful This Is Us, recording new music that she plans to release this year, and she's also expecting her first child, a baby boy, with her husband, Taylor Goldsmith. In her new Romper cover story, however, Moore revealed that it was not easy for her to get pregnant over the summer — and it even took her a while to believe that she truly was.

After trying to get pregnant and taking ovulation tests, Moore chose to see a fertility specialist, who detected an issue with her uterus. They warned her that it could be endometriosis, a condition in which tissue grows outside of the uterus and sheds each menstrual cycle. It can be excruciating and result in fertility issues. “I was fully prepared to go have surgery and fix my uterus and hopefully get rid of the endometriosis, if it was there,” the singer/actress told writer Doree Shafrir. “It was nice to have a plan and to know, OK, well, this is why I haven’t been pregnant yet.”

Then, during a pre-surgery appointment, her fertility specialist delivered her some good news: Moore was ovulating, and there was a slim chance she'd be able to conceive naturally. She took the information with a grain of salt, but soon enough, she became pregnant. Still, it understandably took her some time to accept and celebrate the feat. “Because of this issue with my uterus, I was very hesitant to believe it and put any stock in it," said Moore. "I sort of was holding my breath until 12 weeks."

Now that she's in her third trimester, she not only believes the news but is looking ahead. Affected by last year's tragic murders of Ahmaud Arbery and Breonna Taylor by police officers, Moore is putting a lot of thought into raising her son to be socially conscious. “These are conversations I have with my husband a lot, just in general, about men and [our son] being a white man,” she told Romper. “I want to raise an intelligent, feminist, loving, compassionate young man, who respects women, and who understands boundaries.”

Additionally, she spoke of the efforts Goldsmith, whom she married in November 2018, is taking in order to prepare for fatherhood. “I think he’s been suited to be a father pretty much his whole life,” Moore quipped. “He’s been gearing up for this. Like in the morning, it’s funny, I’ll reach for my phone, and he’ll reach right for whatever baby book he’s reading.”

Noting that the Dawes musician would have been on tour right now if it weren't for the ongoing pandemic, she also expressed how grateful she is to have him around: “We wouldn’t have spent this gestation period together... It would have been fine, but having this experience together makes me feel even more solid and even more excited to be a parent with him.”

More like this
Lizzo Proved She’s Team Jeremiah During Her ‘The Summer I Turned Pretty’ Review
By Grace Wehniainen
Sadie Sink Would Escape Vecna From 'Stranger Things' With This Taylor Swift Song
By Grace Wehniainen
Adele Says It Would Be “Wonderful” To Have Kids With Boyfriend Rich Paul
By Jake Viswanath
What Is Ariana Grande's Net Worth? When It Comes To Money, She Has No “Problem”
By Hugh McIntyre
Get Even More From Bustle — Sign Up For The Newsletter