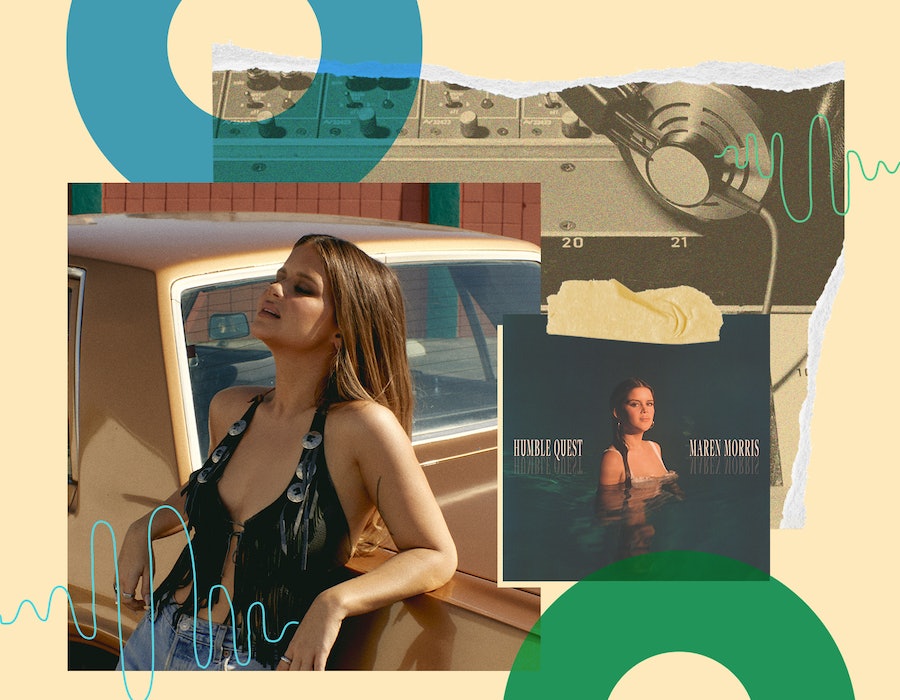 You won’t hear a pop sequel to Maren Morris’ 2018 global smash “The Middle” on her upcoming album. Despite the country singer’s penchant for crossover hits — 2019’s “The Bones” was a sleeper hit that peaked at No. 12 on the Billboard Hot 100 — the 31-year-old musician shut out any fleeting desires to recapture pop success on her third full-length record, Humble Quest, out March 25. “Going into this record, I felt like I didn’t have anything to prove anymore,” the Grammy winner tells Bustle. “I feel very settled in my carved-out place [in] country music.”

Instead, the mother of one stripped back her creative process for an album born out of a dark period in her life. Still grieving the late 2019 loss of longtime collaborator and producer Michael Busbee, Morris experienced postpartum depression following her son Hayes’ birth in March 2020. “I was obsessed with my baby, and I felt so connected to him, but I didn’t feel connected to myself,” she says, crediting teletherapy and friends with getting her through the low period. It was those who asked, “Are you OK?” who impacted her the most. “Those three words are so powerful to a new mother,” Morris says. “Everyone asks about the baby, but we forget about the human that carried it for nine, 10 months.”

After writing “a lot of sad, introspective, heavy songs,” upon returning to work, Morris settled into a writing groove with her husband Ryan Hurd and producer Greg Kurstin. Nearly every song felt like a breakthrough moment, from the autobiographical lead single “Circles Around This Town” to the not-yet-released “Nervous,” an Alanis Morissette-inspired anthem about embracing sexuality. “Even though there are serious subjects on [Humble Quest], my challenge for myself was to really write the truth, but also not stew in the darkness for too long,” she explains.

One of the album’s most uplifting moments comes on “Background Music,” a tear-jerking love ballad and surefire pick for first dances at weddings everywhere. Inspired by the belief that Nashville songwriters only get a 10-year run of chart success before fading into obscurity, Morris ruminated on feeling grateful to make art with Hurd that will likely outlast them both. “We wrote it from a standpoint of being like, ‘This is not going to be gold forever. It’s going to fade at some point, and that’s OK,’” she says. “After we’re gone, maybe these songs will still be played in bars and cars, and that’s more romantic to me than eternity.”

Below, Morris talks about wedding songs, nearly giving up on music, her fantasy of smoking weed with Robin Williams, and Taylor Swift’s impact on country music.

On Wedding Playlists & Her First Kiss

What song played at your wedding?

Our first dance was this Ashley Monroe song we both love and listened to a lot when we first started dating called “Has Anybody Ever Told You?” off [her] second record, The Blade. It’s the most beautiful song.

I don’t want to bash anybody. I’ll say this because he ended up getting canceled, but there were some last-minute songs we were going to have at our wedding by Ryan Adams that we took off the playlist after that New York Times article came out. I don’t know if that’s cringey, but it was a bummer. You can’t like these songs the same way anymore because [he’s], like, such an asshole.

Do you have a favorite song you’ve written with your husband?

I always go back to our second time ever writing together, and we wrote this song called “Last Turn Home.” Like the day after we wrote it, Tim McGraw recorded it and put it on his album. That was my first real cut with a huge artist, and Ryan [recorded it for] one of his most recent projects. It was the first song we ever got to share together that was a success, but it’s also just really romantic. It was before we got together, so it’s funny. The songs sometimes know you better than you know yourself at the time.

Do you remember the first song you ever slow-danced to or made out to as a teen?

“All My Life” by K-Ci & JoJo was probably the first at a junior high dance. I don’t know if we made out to music. I do remember my first kiss was so lame. It was awful. I mean, I was probably awful. But it was in the movie theater watching My Big Fat Greek Wedding, so very sexy.

On Learning To Play Guitar & Nearly Giving Up On Music

You’ve been performing for more than two decades. Can you pinpoint the first moment you felt like a real musician?

When I was 10, I would go sing at these chili cook-offs and festivals around Texas. I would bring a boombox and a CD with karaoke tracks on it and sing from a truck bed. But my dad bought me an acoustic guitar when I was 12 and taught me my first three chords. I taught myself the rest and then started writing on guitar shortly after that. So definitely picking up the guitar [was] when I felt like more than just a karaoke singer.

Has there been a moment when you felt ready to give up on musician life, and how did you get through that?

When I was 18 or 19, all my friends from high school were going off to college, and I was still playing honky-tonks and roadside bars around Texas. At that point I was like, “I think I would like to take a break from this career thing and try something else.” I went to one semester at [University of] North Texas, got the dorm experience, and then realized it was not for me. Shortly after that, I decided to save money to move to Nashville.

Out of your discography, is there a song you're most proud of?

The one that chokes me up every time I play it is “My Church.” I always save it for the end of my shows, because it feels like the most cathartic, communal sing-along moment. It still hits the same way that it did when I first wrote it.

On Her Dream Weed-Smoking Partner & Feeling Understood By Taylor Swift

You recently referenced Machine Gun Kelly’s “I am weed” quote on Instagram, and during your guest hosting stint on Jimmy Kimmel Live last year, you sang a song about America’s weed laws and interviewed stoner king Willie Nelson. What’s your relationship with marijuana, and did it play a role in the making of Humble Quest?

I can’t write when I’m high. I wish I could. It’s just the way my brain works. I internalize everything when I’m stoned, and not in a fun way for writing. But I definitely have a good relationship with marijuana. I really wish the rest of the country could legalize it, and let’s all move on, because it’s not harmful. It’s definitely helpful to me with depression and anxiety. I just use it to chill at the end of the day and go to sleep. I can’t go to parties [high] and socialize, but I’m jealous of those who can.

If you could smoke a joint with any celebrity dead or alive, who would it be and why?

I went on this YouTube wormhole the other night for three hours watching Robin Williams clips. I don’t know if he would smoke with me, but I would love to smoke, be around him, and just feel his hilarious energy. I know he was sober, so that’s probably a bad example, but I didn’t want to give the cliche Willie or Snoop Dogg answers.

What’s your go-to pick-me-up music for when you’re feeling low?

I love Jazmine Sullivan’s music. I love Yebba. She’s an incredible artist and singer, probably one of the best vocalists on this earth right now. I get so inspired by a lot of women. I feel like that brings me out of my days. Ruston Kelly is an amazing singer-songwriter. You feel like you’re listening to your best friend sing to you when you listen to his music.

Is there one musician in particular who you feel truly gets you?

I always hear my perspective, whether it’s spot on or allows me to see or hear something new, when Taylor Swift puts — or re-puts — music out. Her starting in country music and being a songwriter, she really changed so much of the game for women in this genre. Every time she puts a new record out, I feel like I’m really listening to a masterclass in songwriting, but also someone that’s been living inside my brain.