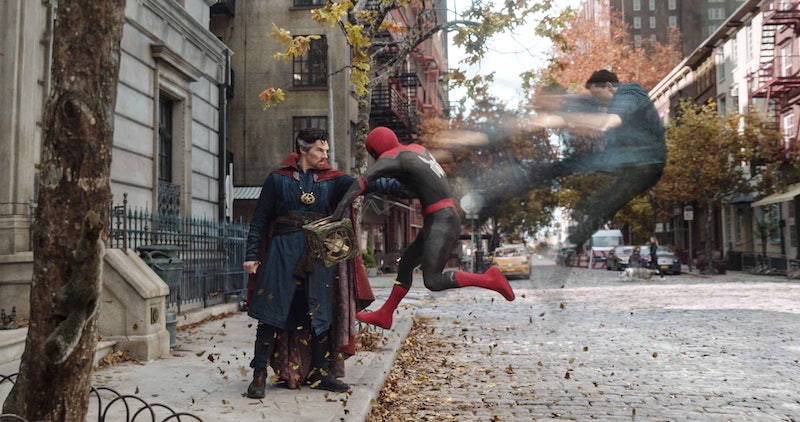 Since the title was revealed in February, it’s been a long wait for the Spider-Man: No Way Home trailer to be released — six months, two Marvel Cinematic Universe Disney+ shows, and one Black Widow’s worth, to be exact. Apparently, it took one final push of a pixel-y leaked trailer for the powers that be to drop the real thing, though. And it did not disappoint.

If you haven’t already watched (and rewatched) the anticipated trailer, which debuted Aug. 23 at CinemaCon, a brief overview: Peter Parker is in trouble, as that Spider-Man: Far From Home mid-credits scene so perfectly set up two years ago. With his secret identity not so secret anymore, Spidey consults with his friend Doctor Strange — er, Stephen (they’re close like that) — about casting a spell that will make the world forget Peter and Spider-Man are one and the same. And the sorcerer obliges! But the result seems to be some serious Multiversal chaos — a large-scale mess that the antics of WandaVision and Loki have been warning us about for months.

Oh, and those reports about some of your faves from earlier Spider-Man movies returning? Yep, they’re very real — so far, Willem Dafoe and Alfred Molina are back as the Green Goblin and Doc Ock., respectively. From their return to Strange’s new, cozy look, here are some of the best memes and tweets about the No Way Home trailer and its most talked-about moments.

Comfy sweats and a punny mug made Doctor Strange — who we haven’t seen since Avengers: Endgame — a truly relatable hero.

In the aftermath of WandaVision and Loki, the MCU fandom had fun imagining Strange as the de-facto parent tasked with repairing Wanda, Loki, and Sylvie’s mischief, which made his direct involvement in the latest Multiversal mishap surprising. The return of Wong, who very much did not agree with Strange and Peter’s plan, was also a delightful surprise for viewers.

For many fans, seeing Peter (Tom Holland) and MJ (Zendaya) back together was a high point of the trailer. Of course, the possibility of her forgetting him altogether would make No Way Home a heartbreaking roller coaster.

The Return Of Old Spider-Man Characters

The No Way Home teaser trailer confirmed something fans have long hoped for: the return of fan-favorite characters from past iterations of Spidey’s story.

Well, the countdown to No Way Home’s Dec. 17 release just got real. And if this official trailer is any indication, the actual movie could very well be — to borrow from Marvel meme-ology — “the most ambitious crossover event in history.”

More like this
The 50 Most Powerful Characters In The Marvel Universe, Ranked
By Johnny Brayson and Nola Pfau
Lego Just Announced Its 'Black Panther' Set Release Date
By Maxine Harrison
The 'Andor' Timeline, Explained
By Gretchen Smail
Lin-Manuel Miranda & Tituss Burgess React To 'Little Mermaid' Casting Backlash
By Radhika Menon
Get Even More From Bustle — Sign Up For The Newsletter