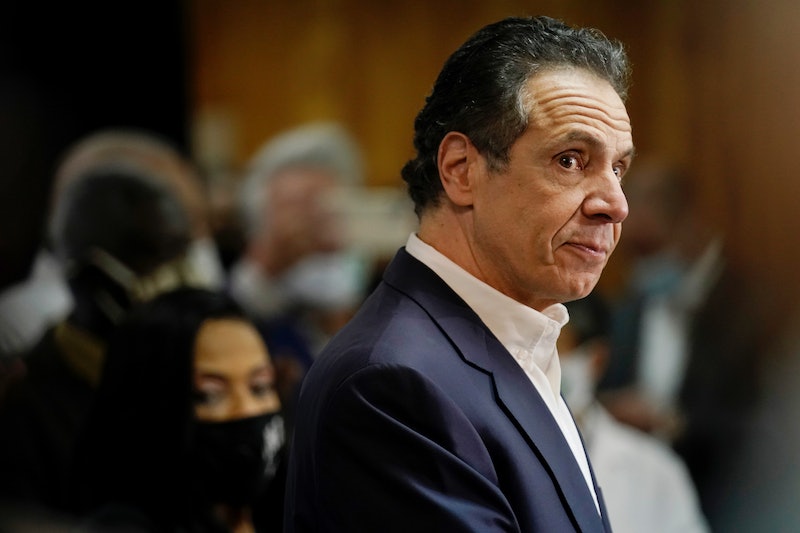 On Tuesday, Aug. 10, after many of his constituents and colleagues — including President Joe Biden — started calling for his resignation, New York Gov. Andrew Cuomo stepped down. The announcement came a week after New York state Attorney General Letitia James released her office’s report that stated the governor sexually harassed 11 women. The five-month investigation concluded that Cuomo, 63, engaged in "unwelcome and nonconsensual touching" and made “suggestive” comments, among other violations, to current and former staffers.

In a previous speech from Aug. 3, Cuomo denied the allegations, saying, "I want you to know directly from me that I never touched anyone inappropriately or made inappropriate sexual advances.” When announcing his exit on Aug. 10, he stated, “Given the circumstances, the best way I can help now is if I step aside and let government get back to government.” His resignation takes effect in 14 days.

Replacing Cuomo is Lt. Gov. Kathy Hochul, 62, who will serve as the state’s first female governor. She joined Cuomo’s team as his running mate in 2014 and was re-elected in 2018. Hochul has been a long-time proponent for women’s safety and even helped enact the “Enough is Enough” legislation that combats sexual assault on college campuses. Following Cuomo’s resignation announcement, she wrote on Twitter, “I agree with Governor Cuomo’s decision to step down. It is the right thing to do and in the best interest of New Yorkers,” adding, “As someone who has served at all levels of government and is next in the line of succession, I am prepared to lead as New York’s 57th Governor.”

The scandal came after Cuomo enjoyed praise for his COVID-19 response, which even resulted in a multi-million dollar book deal for American Crisis: Leadership Lessons from the COVID-19.

After months of calling for Cuomo’s resignation, Twitter erupted with reactions, including a lot of Sex and the City jokes. Important context: Cynthia Nixon, who plays Miranda Hobbes in the iconic (former) foursome, ran for office against Cuomo in 2018 but lost to him in the Democratic primary.

One user couldn’t help but wonder, what would happen if Miranda, errr, Cynthia were governor instead? User @HumaImtiaz wrote, “If we had Governor Nixon, we’d all be spared a SATC reboot. Elections have consequences.” Some referenced iconic Miranda moments and the SATC reboot And Just Like That....

Some users poked fun at how his resignation relates to today’s news cycle. User Zara Rahim even referenced Beyonce’s latest rare interview with Harper’s Bazaar that dropped on the same day. And the ever-hilarious @LiZaOutlives account made a joke about Liza Minelli outliving Cuomo’s political career.

Other users pointed out the grim reality that it took assault charges for a female to finally hold office as governor in New York. Some even recalled a similar incident in 2008, when David Paterson became the first Black governor of New York after he took over for Governor Eliot Spitzer, who also resigned following a sex-related scandal.

Others asked where Mayor Bill De Blasio is and other pertinent questions like “how drunk” he is “going to get.”

Still, others posted and joked about accountability.

Tarana Burke, activist and founder of the #MeToo movement, also took to Twitter to respond to what Cuomo said in his resignation statement that “there are generational and cultural shifts that I just didn’t fully appreciate.” She wrote, “The *rules* have NOT changed. It was WRONG 50 years ago and today. The difference is there were few paths to accountability years ago.” In another tweet, she wrote, “The rule of ‘keep your hands to yourself’ is universal. We all learned that in Kindergarten.”