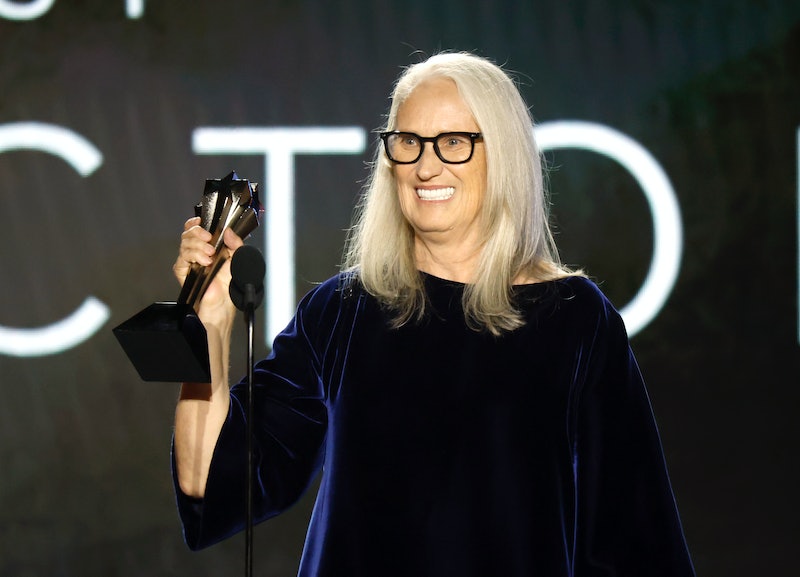 Jane Campion took home Best Director at the 2022 Critics Choice Awards for her work on the Western psychological drama The Power of the Dog starring Benedict Cumberbatch and Kirsten Dunst. While accepting the award, Campion praised tennis players Venus and Serena Williams, subjects and executive producers of the biopic King Richard, in her speech and attempted to offer up a relatable comment about working as a woman in a male-dominated field. But her comments were met with controversy on social media, as many fans of the Williams sisters considered the remark unnecessary and ignorant.

“What an honor to be in the room with you,” Campion said of the Olympians. “I’ve taken up tennis — I truly have — and Will [Smith], if you want to come over and give me lessons, I would truly love it. I actually had to stop playing because I’ve got tennis elbow.”

“I’d also like to give my love out to my fellow... the guys. The nominees,” the director continued, referencing Paul Thomas Anderson (Licorice Pizza), Kenneth Branagh (Belfast), Guillermo del Toro (Nightmare Alley), Steven Spielberg (West Side Story), and Denis Villeneuve (Dune). But Campion then circled back to revisit the athletes and added, “Venus and Serena, you’re such marvels. However, you don’t play against the guys, like I have to.”

It seems Campion was referring to the fact that the Williams sisters compete professionally in the Women’s Tennis Association and generally play opposite female athletes rather than men. However, the tennis players have also participated in mixed matches, with Venus scoring second place at the 2016 Rio Olympics. Many fans of the athletes felt Campion’s comment was uncalled for, as it minimizes the plights they’ve had to overcome both on and off the field as women — and specifically Black women.

While the Williams sisters may not often play tennis against men, the record-breaking athletes have publicly endured racist and sexist comments from behind-the-scenes figures, professional commentators, and hecklers alike for decades. Furthermore, Campion’s remark came off as especially ignorant as it undermines the entire plot of King Richard. Starring Smith in its titular role, the film follows Richard Williams’ journey to coach his daughters into successful tennis players as a low-income family in the face of racism.

After receiving widespread criticism for her onstage banter, Campion issued an apology to the Williams sisters via Deadline on March 14. “I made a thoughtless comment equating what I do in the film world with all that Serena Williams and Venus Williams have achieved,” she wrote, per the publication. “I did not intend to devalue these two legendary Black women and world-class athletes.”

Continuing her statement, the director expressed admiration for the athletes and acknowledged their accolades. “The fact is the Williams sisters have, actually, squared off against men on the court (and off), and they have both raised the bar and opened doors for what is possible for women in this world. The last thing I would ever want to do is minimize remarkable women,” Campion said. “I love Serena and Venus. Their accomplishments are titanic and inspiring. Serena and Venus, I apologize and completely celebrate you.”

Campion’s controversial Best Director speech arrived on the heels of her response to actor Sam Elliott’s recent criticism of The Power of the Dog; his comments were largely deemed homophobic and sexist. Speaking to Marc Maron on a Feb. 22 episode of the WTF podcast, Elliott called the movie a “piece of sh*t” and challenged its authenticity as a Western film. “I mean, Cumberbatch never got out of his f*cking chaps. He had two pairs of chaps — a woolly pair and a leather pair,” he said. “And every f*cking time he would walk in from somewhere — he never was on a horse, maybe once — he’d walk into the f*cking house, storm up the f*cking stairs, go lay in his bed in his chaps and play his banjo.”

In an interview with Variety on the March 12 DGA Awards red carpet, Campion said, “I’m sorry, [Elliott] was being a little bit of a B-I-T-C-H. He’s not a cowboy; he’s an actor. The West is a mythic space and there’s a lot of room on the range. I think it’s a little bit sexist.”

Shortly following Campion’s speech at the Critics Choice Awards, many social media users expressed disappointment and anger toward the director’s comment about the Williams sisters on Twitter.