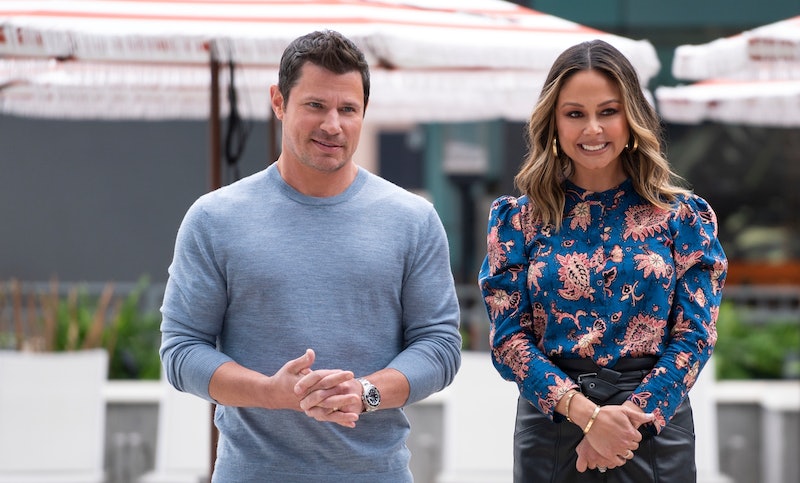 Nick Lachey and Vanessa Minnillo first met in 2003 while she was a host on MTV’s Total Request Live and he was benefiting from the popularity he attained as a member of boyband 98 Degrees. But at that time, he was married to Jessica Simpson. It’s been nearly 20 years since they were introduced, and in that time, they found one another while single, got married, welcomed three children into their family — and they’ve also managed to make millions of dollars together.

Whether from music, modeling, business ventures, or their several TV projects (including Netflix’s The Ultimatum), both Lacheys have earned millions on their own and by working with each other.

Here’s how much the Lacheys are worth as a couple and how they accrued all those dollars.

What is Vanessa & Nick Lachey’s Net Worth?

The two stars have a combined net worth of $25 million, according to Celebrity Net Worth.

2 Ways The Lacheys Made Money Together

Since 2020, the Lacheys have been hosting Netflix’s hit reality dating program Love Is Blind. The two signed on for the first season, and it quickly rose into the streaming giant’s top 10 most-watched shows, and a month after it premiered, it was renewed for two more seasons. In February 2022, the second iteration was unveiled, and shortly afterward, the company signed on for two more seasons, meaning the favorite among viewers will run at least into its fifth season. The married couple now has a steady gig — that likely pays very well — together for years to come.

In April 2022, the Lacheys started appearing in another Netflix show together, as they’re also hosting The Ultimatum, which the streamer describes with the following pitch: “Get hitched or call it quits? Couples put their love to the test — while shacking up with other potential matches — in a provocative reality series.” Before the dating program even launched, Netflix picked it up for a second season. Those Netflix checks keep adding to the Lacheys’ growing net worth.

The Lacheys have now been together long enough that they have purchased and sold several homes, potentially making millions in the process, though exactly what their profit was from these transactions is, of course, not known to the general public.

In 2011, the pair bought a California home in Encino for $2.85 million, and just five years later, they sold it for $4 million. In the same town, they purchased another location for $4.15 million, which they then sold to another family in 2019 for $6.6 million. They also owned another California property, which they spent $4.8 million for before selling it to tennis player Naomi Osaka in February 2022, though the terms of that deal have remained confidential.

Looking at all of their real-estate deals as a couple, the Lacheys may have earned $3.5 million from buying and selling homes, though of course, that sum doesn’t take into account their 2022 sale nor any money they spent to upgrade those properties.

Nick rose to prominence as a singer, and while he is more focused on other ventures these days, he is still often referred to as a musician before any other title. From 1996 until 2002, Nick’s vocal group 98 Degrees rose to the top of the Billboard charts and quickly established themselves as one of the hottest acts in the top 40 space.

Throughout their many years together, which can be split into two distinct chapters separated by a decade-long hiatus, 98 Degrees sent half a dozen projects to the Billboard 200 albums chart, with just one, 2000’s Revelation, reaching the top 10. The band scored four top 10 hits on the Hot 100, with three others breaking into the top 40. According to the RIAA, 98 Degrees has moved at least 7.5 million albums and 2.5 million singles in the U.S. alone. The group was nominated for one Grammy alongside Mariah Carey and Joe for the collaborative single “Thank God I Found You.”

After 98 Degrees went on a break in 2002, Nick launched a solo career. He has released four full-lengths, two of which have charted, with his sophomore effort What’s Left of Me entering the Billboard 200’s top 10, as it peaked at No. 2. That album produced his only two solo singles that reached the Hot 100: “What’s Left of Me” (No. 6) and “ I Can't Hate You Anymore” (No. 87). Nick also ranked with “Where You Are,” a duet with his then-wife Simpson. His album What’s Left of Me and its title track have been certified gold for moving half a million units in the U.S.

Nick is credited as a songwriter on many of his own songs, and quite a few 98 Degrees tracks, but most of the band’s hit singles were penned by others. That distinction matters, as songwriters are the ones paid when a song is played on the radio, and they earn small royalties when fans listen to the music on streaming platforms.

Both as a member of 98 Degrees and on his own, Nick has toured the world, and while concert grosses and his take-home sum are private, he has been able to sell out large venues.

Nick spent a good portion of his early TV and film career as an actor instead of a realty TV host. He’s guest starred or landed recurring roles on programs like American Dreams, Charmed, Hope & Faith, I’m With Her, and Hawaii Five-0, as well as movies such as Bewitched, The Hard Easy, and Rise: Blood Hunter. He has enjoyed a second career as a judge and host on a number of reality shows, and more recently, these have been the focus for Nick. Throughout his time as a star, the pop singer has appeared on series such as Alter Ego, Big Morning Buzz Live, and The Sing-Off. What he has been paid for hosting, judging, and acting isn’t publicly available.

Nick is a self-described sports fan, and he has ventured into the industry more than once. In 2006, he was part of a group of celebrities who formed a new team under the American Basketball Association named the Hollywood Fame. As of 2022, the team is no more.

He was also a part-owner of the baseball team the Tacoma Rainiers, an AAA affiliate of the Seattle Mariners. He spoke to ESPN about his role in the organization after the team won a major title, saying, “It’s difficult for me not being a local owner, with living out of state and being busy. I don’t make it around as much I’d like to. I’ve just tried to be a supportive voice for this team, and hopefully we’ve brought some good publicity to the area.”

What money Nick has made from these endeavors, if anything, or what he had to spend to become involved, was never shared with the press.

Nick and his brother Drew also once owned a sports bar in his hometown of Cincinnati appropriately named Lachey’s Bar. The spot was featured in their reality program Lachey’s: Raising the Bar, which lasted for one season on A&E in 2015. The bar closed in 2018.

In 2009, Nick sold the Calabasas home he once shared with Simpson for $3.495 million. They had purchased the property in 2002 for $1.685 million. The difference between the purchase and the sale price means the former couple may have earned as much as $1.8 million, though how that was split or what renovations they had to pay for isn’t clear.

Nick regularly partners with brands to promote products, earning money by lending his famous face and name. Throughout his more than two decades as a celebrity, he has worked with companies like Axe, Bud Light, Cincinnati Bell, Hornblower Cruises, Subway, and Twix.

Divorce can be expensive, but when it comes to the splitting up of Nick and his ex-wife, he actually made money from the division. When they ended their marriage, there wasn’t a prenuptial agreement, and in the end, she had to pay him a reported $12 million.

Vanessa has spent years on TV, both as an actor and a host. As an actor, she is perhaps best known for her work on The Bold and the Beautiful, Dads, Truth Be Told, BH90210, Call Me Kat, and most recently NCIS: Hawai’i, which she stars in. She has also appeared on 30 Rock, How I Met Your Mother, CSI: NY, Psych, and American Housewife, among others projects.

As a judge and host, Vanessa has anchored programs like Beat Seekers, Entertainment Tonight, Top Chef Junior, The Talk, Wipeout, True Beauty, and many iterations of the Miss USA pageant. Vanessa’s salaries, either for hosting or a simple cameo, are private, but appearing on TV may very well be her main revenue source.

In the early days of her career, Vanessa posed for quite a few magazine covers and served as a model for brands. In 2007, she earned the role of the face of Bongo Jeans. Throughout her years as a TV personality, Vanessa has partnered with a number of brands in some form of promotion or ad. She has worked with companies like Rice Krispies and Pampers, and that’s just the tip of the iceberg. An organization named Truth in Advertising has cited a large number of social media posts of hers that appear to be ads, but weren’t marked as such. The main takeaway here is that Vanessa is used to using her platform to help other firms sell products.

In 2007, Vanessa launched a cosmetics line called Flirt! which was at one time sold in Kohl’s stores across the U.S., though that company is no longer in business.

In 2021, Vanessa released her first book, Life from Scratch: Family Traditions That Start with You. The TV star promoted the title heavily, but sales numbers aren’t available.

More like this
Which RHODubai Housewife Has The Biggest Net Worth?
By Hugh McIntyre
Howard Stern's Net Worth: Is He The Richest Man In Radio?
By Hugh McIntyre
What Is Ariana Grande's Net Worth? When It Comes To Money, She Has No “Problem”
By Hugh McIntyre
Chrishell Stause & G Flip Have “No Rules Or Regulations” In Their Relationship
By Brad Witter
Get Even More From Bustle — Sign Up For The Newsletter