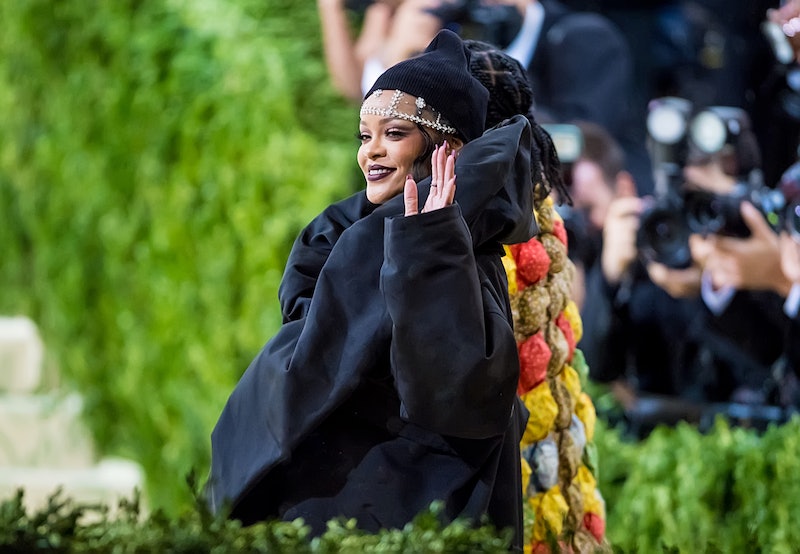 For the past five years, waiting for Rihanna’s new album has been like waiting for rain in this drought: useless and disappointing, to quote the great Hilary Duff. However, an end to this harrowing journey may be in sight. In a new interview with the Associated Press before her third Savage x Fenty fashion show, posted on Wednesday, Sept. 22, Rihanna finally teased her new album, promising that it’s unlike anything fans have heard from her before. “You’re not going to expect what you hear,” she teased. “Just put that in your mind.”

The former singer and beauty maven went on to explain that she approaches her music the same way she approaches fashion: She tries on everything and doesn’t limit herself to one style — or genre, in this case. “Whatever you know of Rihanna is not going to be what you hear,” she said. “I’m really experimenting. Music is like fashion. You should be able to play. I should be able to wear whatever I want, and I treat music the same way. So I’m having fun, and it’s going to be completely different.” However, she refused to give a release date or even a tentative ETA for when the album could arrive. “That’s it,” she declared.

For true Riri fans, this shouldn’t be surprising to hear. Before she pivoted to focus on her cosmetics empire Fenty Beauty, lingerie line Savage x Fenty, and her now-paused luxury wear line Fenty, Rihanna was a chameleon when it came to her music, switching effortlessly from reggae to hip-hop to EDM to R&B to straight-up pop — sometimes on the same album. Her last album Anti, released in 2016, added dancehall, ’80s glam rock, and bluesy soul to the mix, becoming her most critically acclaimed album to date and earning six Grammy nominations.

Since then, despite her primarily touting make-up rather than music on Instagram, Rihanna has been working on the follow-up to Anti — just very slowly. In October 2020, she revealed that she’s held “tons of writing camps” to figure out how she wants the album to sound. “You do pop, you did this genre, you do radio, but now it’s just like, what makes me happy?” she told AP. “I just want to have fun with music. Everything is so heavy. The world that we live in is a lot. It’s overwhelming every single day. And with the music, I’m using that as my outlet.”

It sounds like the COVID-19 pandemic won’t affect her music lyrically, but she did admit that it only delayed the album even further. “I want to go on tour, but I can’t,” she said. “So I’m stuck with music that I love, and now I’m trying to figure out how I can even create visuals to that.” Riri, if you can put on two epic fashion shows with full-scale production during a pandemic, then a music video shouldn’t be an issue.