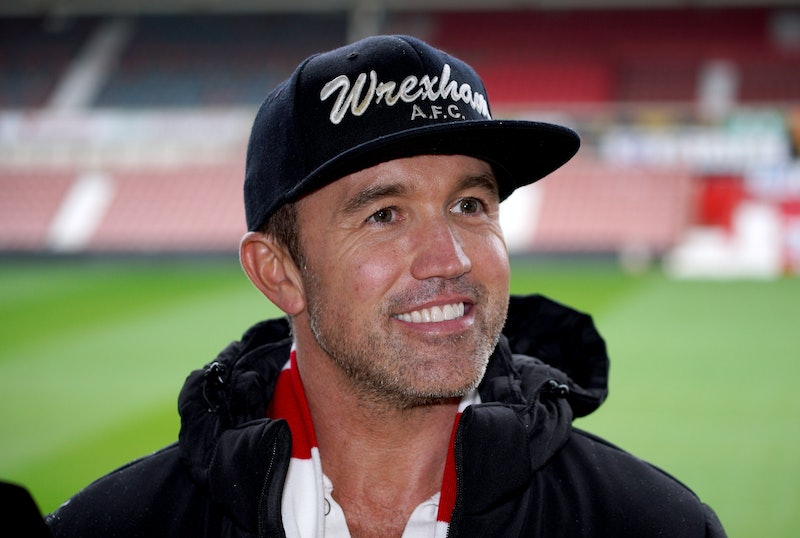 Two Hollywood actors purchasing a Welsh non-league football club probably wasn’t on your bingo sheet for 2021 — and yet, that’s exactly what happened when It’s Always Sunny In Philadelphia’s Rob McElhenney teamed up to take over Wrexham F.C. with fellow actor Ryan Reynolds. The new Disney+ documentary Welcome To Wrexham charts exactly how this unlikely union came to pass, and more importantly, where it’s going.

After investing a couple of million into the club initially, the actors-turned-football club owners have been pumping cash into scoring talented new players and investing in the Wrexham women’s squad following the success of the England Lionesses at the Euros — as well as amusing fans during tense matches. But the question is, how did Rob McElhenney make his millions in the first place?

3 Ways That Rob McElhenney Made His Millions

As with a lot of new shows, the pilot episode of It’s Always Sunny was filmed on quite the shoestring budget. According to the Los Angeles Times, McElhenney and his collaborators spent just $100 (£84) on a camcorder and cast pizzas. By the time FX put their money behind the first season, McElhenney (the show’s creator) was being paid $70,000 (around £59,000) per episode, with relatively low pay — compared to other sitcoms, at least — coming alongside full creative freedom.

“We knew relative to the business that for people that were writing, executive producing and starring, and for me directing… we knew that ultimately it was low,” he told The Wrap in 2011. “What FX gave us in the beginning was a way to make our show the way that we wanted to do it.” Fast-forward to season fifteen and all the show’s successes, and this initial salary is likely to have been upped no end. Though McElhenney hasn’t shared a more up-to-date figure since, the network now invests an estimated $800,000 (over £650,000) per episode in total.

As well as portraying his best known character, It’s Always Sunny’s Mac, McElhenney currently stars in another of his own creations, Mythic Quest. Co-created with Charlie Day and Megan Ganz, the comedy was snapped up by Apple TV+ for an undisclosed fee, and has just been renewed for two more seasons.

And besides guest appearances in the likes of The Mindy Project, Fargo, and Game Of Thrones, the actor has also inked a documentary deal with Disney+ alongside Ryan Reynolds.

Following in the footsteps of his Wrexham co-owner Reynolds (who also has a stake in a gin company and budget mobile brand), McElhenney co-launched a new tech company earlier this year. Built for creatives, Adim uses Web3 technology — think along the lines of crypto-currencies, NFTs, and blockchains — to try and give nifty new tools to aspiring collaborators.

“Every beloved character throughout TV, movie, and gaming history has been imagined and brought to life through collaboration,” the actor said in a press release. “Adim is building for the next evolution of these groups — communities of creators, writers, artists, designers, developers, fans, and friends working together to create and own a new generation of content.” In its first round of fundraising, Adim raised a reported $5 million (£4.2m) of initial investment.

In 2021, McElhenney and Reynolds bought the National League football club Wrexham F.C. and, according to The Mirror, the duo invested an initial £2m under the terms of the new deal. They’re likely to pump far more money into the club over the coming years, too. Speaking to press during a conference at Wrexham’s home ground last year, the actors said they’re ultimately setting their sights on the top level of English football, the Premier League. The team currently plays in the fifth tier.

Speaking to the BBC in the lead up to Welcome To Wrexham, McElhenney doubled down on this ambitious goal, adding that they are beginning to think about long-term plans should the team manage to climb up the league tiers over the next five years. “We don't have any specific plans in place, we just recognise when you're competing with the kind of money that is in Premier League and even Championship football, it's essentially untenable for individuals,” McElhenney said.

“As individuals in the entertainment business we might be rather successful, but that's going to be difficult to support year after year after year with the kind of money that's in that league,” the actor added.

While the dream may be a long way off yet (Wrexham missed out on promotion to the EFL last season), the duo’s plans to stick with the Welsh side “for the rest of our lives” could pay off in the long-term. Every season, Premier League teams equally split a huge pot of money from TV rights — worth a whopping £1.2 billion in total — with ticket sales and commercial link-ups bringing in vast sums of money for the club. Just four more promotions to go, lads.

What is Rob McElhenney’s Net Worth?

Largely thanks to his acting career and knack for creating comedy gold like It’s Always Sunny, Celebrity Net Worth estimates that McElhenney is worth an impressive $50 million (£42.3m).

More like this
Everything To Know About The 'Daisy Jones & The Six' TV Series
By Maxine Harrison and Brad Witter
Parminder Nagra Definitely Relates To Her 'Maternal' Character
By Maxine Harrison
Yes, 'The Price Of Glee' Is Available To Watch In The UK
By Catharina Cheung
'Bridgerton's Regé-Jean Page Is The World’s Most Handsome Man
By Darshita Goyal
Get The Very Best Of Bustle/UK
Sign up for Bustle UK's twice-weekly newsletter, featuring the latest must-watch TV, moving personal stories, and expert advice on the hottest viral buys.