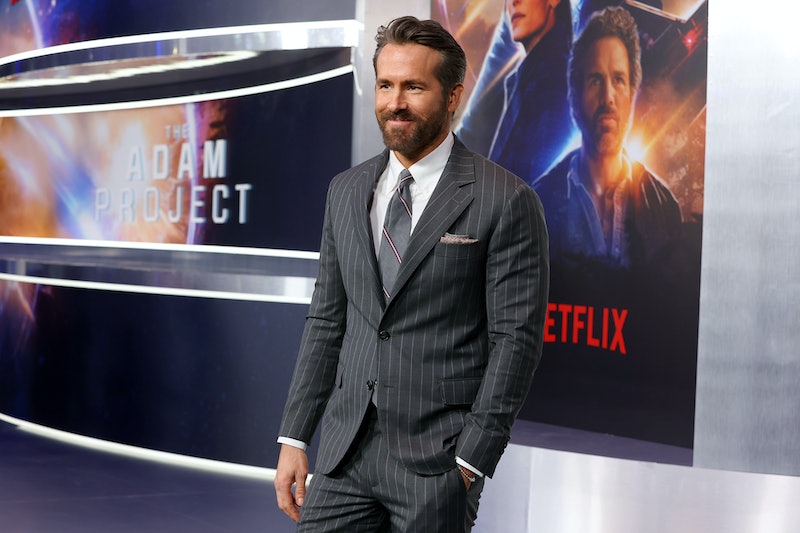 Ryan Reynolds knows a thing or two about success. The actor is one of the highest paid in Hollywood and takes home up to $30 million per film. Plus, he’s a pretty prolific businessman, too. As his multi-million dollar net worth continues to grow, many people would assume that Reynolds is winning at life — but during the Indeed FutureWorks conference in 2022, the star explained that he isn’t focused on “winning,” but on learning. “We live in a world that’s increasingly gamified, and I think we have an instinct to win, crush and kill,” the Red Notice star said. “But if you can disengage or disarm that instinct for a second and replace it with seeking to learn about somebody instead, that, as a leadership quality, for me, has quite literally changed every aspect of my life.”

Ryan Reynolds spent years as a working actor before becoming a household name, but since he went from talented newcomer to bankable movie star, he’s been headlining some of the highest-grossing films of the past decade. The Deadpool star injects his signature comedic flair into his films, and he has proven to be a reliable draw, whether in theaters or on streaming. In 2021 and 2022 alone, he’s landed huge wins for Netflix with titles like Red Notice, Free Guy, and The Adam Project.

Reynolds regularly pulls in tens of millions of dollars per movie, but he doesn’t stop there. He’s used his celebrity, sense of humor, and marketing prowess to partner with brands and even launch his own successful company, making even more money for his work outside of the film industry.

For example, he and It’s Always Sunny In Philadelphia star Rob McElhenney have co-owned the Wrexham Football Club since February 2021. Their first two seasons as owners are featured in the Welcome to Wrexham docuseries on FX.

Read on to find out how much Reynolds is worth, how much he’s made for some of his highest-profile movies, and what he does when he’s not acting.

1. Film & TV: From The Green Lantern To Spirited

Reynolds is one of the highest-paid actors in the world, according to Forbes, and he regularly commands eight-figure paychecks. While his salary isn’t publicly available for most of the films and the few TV shows he’s appeared in, those paychecks that have been unearthed are impressive.

Here are just a few of Reynolds’ largest paydays.

Another Deadpool movie is on the way and it seems Reynolds is keen to capitalize on the franchise’s popularity. According to reports, the actor is asking for $20 million for Deadpool 3 and $30 million for a potential fourth installment.

Since becoming a headliner, Reynolds has also starred in films like Hitman’s Wife’s Bodyguard, The Adam Project, Free Guy, The Croods 2: A New Age, Pokémon Detective Pikachu, The Hitman’s Bodyguard, Life, and Criminal. Though his salary for these projects isn’t publicly available, he likely took home several million for each, based on what he was paid for other films around the same time. Reynolds also has a handful of films coming up that will bring in millions more, including Clue, Dragon’s Lair, and Deadpool 3.

During a 2018 appearance on Live with Kelly and Michael, he revealed that he earned just $150 an episode for his first acting gig in 1991 when he was a teenager. “For me, I thought I was like a gajillionaire,” Reynolds said. “For a 150 bucks a day it was like a dream come true.”

Reynolds has used his riches to make himself even richer by investing in companies and purchasing partial ownership stakes in a number of firms that saw him enter the alcohol, communications, and sports industries.

So, what things are they?

In 2018, Reynolds acquired a minority ownership stake in Portland-based Aviation Gin. “I’m there for every other aspect of the business because I really love this gin,” Reynolds told The Gentlemen’s Journal. “I love it more than any other liquid in the world — except maybe water…” After he joined the team, the actor began promoting the alcohol brand heavily on social media and in commercials. In 2020, spirits conglomerate Diageo purchased Aviation Gin (and several other brands) for $610 million, which Food & Wine reports split into an initial payment of $335 million and a potential $275 million, based on the company’s ongoing performance. Estimates suggest that if Reynolds has a 20% stake, he might have taken home $67 million from that first payout, and there may be another possible $55 million coming his way.

A year after he invested in Aviation Gin, Reynolds began working in the communications field. Reynolds acquired another minority stake in Mint Mobile, a prepaid cell phone company. Estimates suggest he bought between 20% and 25% of the firm, and he soon began appearing in commercials for the brand. In 2021, rumors began to circulate in the industry that Altice was interested in purchasing the company for somewhere between $600 and $800 million. If the deal goes through, Reynolds could earn as much as $200 million for his involvement and investment.

In 2020, Reynolds joined the board of the Match Group, which owns dating sites and apps like Tinder, Match.com, Meetic, OkCupid, Hinge, PlentyOfFish, and others. What he’s paid for his celebrity association and work isn’t clear.

One year later, Reynolds partnered with fellow actor Rob McElhenney to purchase the Wrexham AFC football club, based in Wrexham, Wales. According to the BBC, the two stars paid a combined $3.4 million to own the brand, and they already have a docuseries about their experience with the team on FX titled Welcome to Wrexham. According to an interview, Reynolds failed to consult his wife Blake Lively before making the purchase.

In 2018, Reynolds and former studio marketing executive George Dewey formed Maximum Effort, a production company that works on movies to commercials. The marketing arm of the firm was spun off and sold as a separate entity to advertising software company MNTN in June 2021, though the terms of the deal weren’t disclosed. So far, Maximum Effort has production credits on Reynolds’ films like Free Guy, The Adam Project, and Deadpool 2, and work has begun on the John Krasinski-directed Imaginary Friends, which will also star Reynolds. In 2021, Maximum Effort signed a three-year first-look deal with Paramount Pictures, which picked up Imaginary Friends.

MNTN has created commercials for companies Reynolds is involved with, including Aviation Gin, Mint Mobile, and Match.com. Several of these ads have gone viral, including one featuring a woman known for appearing in a Peloton ad and another that featured the first taste of Taylor Swift’s re-recording project, as it was soundtracked by “Love Story (Taylor’s Version).”

Throughout his years as a superstar, Reynolds has used his fame to help other brands sell their products, which is often a big moneymaker for top-tier actors and musicians. Some of these commercials and ads were produced by Maximum Effort or MNTN, while others simply feature Reynolds. He has signed on to work with brands like 1Password, Armani, BT Smart Hub (the commercial he filmed was eventually banned in the U.K.), Hugo Boss (he shot several ads for the fashion house), Hyundai, Kraft, L'Oréal, Nissan, and Toon Blast, though what he earned monetarily for these efforts was never made public.

What Is Ryan Reynolds’ Net Worth?

Reynolds is worth $150 million, according to Celebrity Net Worth. That sum reportedly doubled in just five years, as his total was previously pegged at $75 million. Forbes reports that in 2020, Reynolds ranked as the second-highest-paid actor in the world, bringing home $71.5 million. Reynolds’ net worth is bound to grow between his upcoming films and profitable business ventures.

More like this
You Definitely Know The Voice Of Shuri's AI In 'Black Panther: Wakanda Forever'
By Brad Witter
'Wakanda Forever' Is Already Opening Doors For Mabel Cadena
By Grace Wehniainen
Is Blake Lively Or Penn Badgley The Richest 'Gossip Girl' Star From The OG Series?
By Hugh McIntyre
Rita Ora’s Empire Is Fifty Shades Of Impressive
By Darshita Goyal
Get Even More From Bustle — Sign Up For The Newsletter

This article was originally published on April 12, 2022