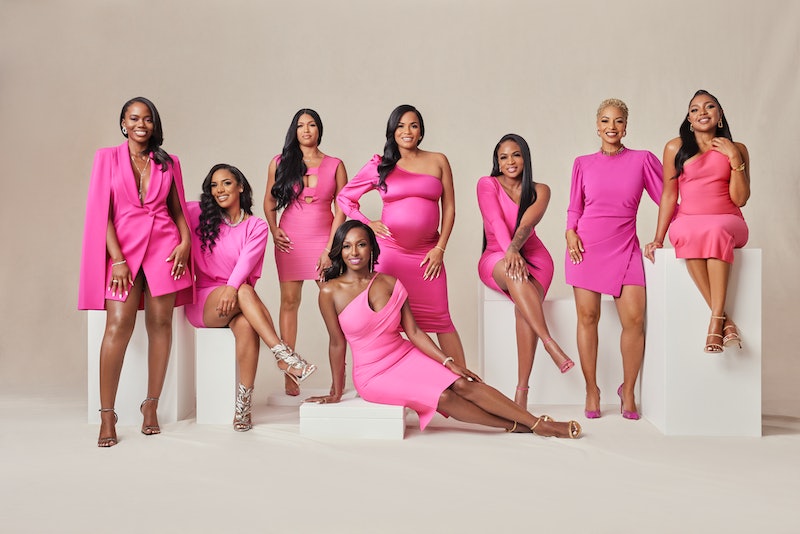 Netflix has yet to announce if Selling Tampa will return for Season 2, but the end of the reality series’ first season all but guarantees the women of Allure Realty will be back onscreen.

For one, there’s the fallout of Sharelle’s unexpected pregnancy to deal with. Because her fiancé Chad “Ochocinco” Johnson lives 280 miles away in Miami, Allure’s employees worried what starting a family with Chad might mean for Sharelle’s commitment to Allure. But she assures Bustle she can balance it all. “I’ve been deployed with kids, I know how to handle this,” the 13-year U.S. Army veteran said in a recent interview. “The job is still going to get done, and it takes a team to continue to run a business. So as long as I put people in place that continue to run it, we’ll be fine.”

Putting those people in place also contributed to drama at the end of Season 1. Though Colony Reeves, who was Sharelle’s first employee, threw her hat in the ring to fill Sharelle’s heels, Juawana Colbert ultimately earned the role. Rena also considered opening her own brokerage, while Sharelle fired Alexis for poor performance as an act of “tough love” but left the door open for her to return if she makes some self-improvements. (Spoiler alert: Rena and Alexis are both still listed as agents on Allure’s website, so expect those decisions to play out in a potential Season 2).

Other things you can expect from a second season? Sharelle has opened a new Allure Realty office in Miami and has plans to expand to Charlotte, North Carolina soon. Here’s everything else we know so far.

Since Selling Tampa is a new series, it’s not on a set schedule yet. If it follows the same pattern as Selling Sunset, though, fans can likely look forward another season in mid-2022.

Colony, Rena, Juawana, and Alexis are all likely to return, as are Season 1 cast members Anne-Sophie Petit-Frere, Tennille Moore, and Karla Giorgio. But Season 2 could feature some new faces. According to Allure’s company website, there are now 10 additional agents (including two men) working in the Tampa office, and seven new employees in the Miami branch. Considering Selling Sunset already has multiple spinoffs, there could even be a Selling Miami installment down the line.

Meanwhile, Sharelle told Bustle that while she made it a point to keep her relationship with Chad private in Season 1, viewers can expect to see more of him in a possible second season. “Chad respected that this is my show,” she said. “As we grow, if we begin a Season 2, you’ll eventually see more of Chad. But right now it’s about me and my brokerage, not about Chad and I.”

Netflix released the first Selling Tampa teaser about three weeks ahead of the premiere date, with the full trailer dropping a week later. This post will be updated as more details become available.

More like this
Will ‘Bling Empire’ Return For Season 3? Here’s What To Know So Far
By Kadin Burnett
Chrishell Confirmed Her New Romance With An Aussie Musician At The 'Selling Sunset' Reunion
By Brad Witter
Move Over, 'Sunset'! The Drama-Filled Trailer For 'Selling The OC' Is Here
By Nola Ojomu
The 'Selling Sunset' Cast Isn't Buying Christine's Excuse For Ditching The Reunion
By Brad Witter
Get Even More From Bustle — Sign Up For The Newsletter