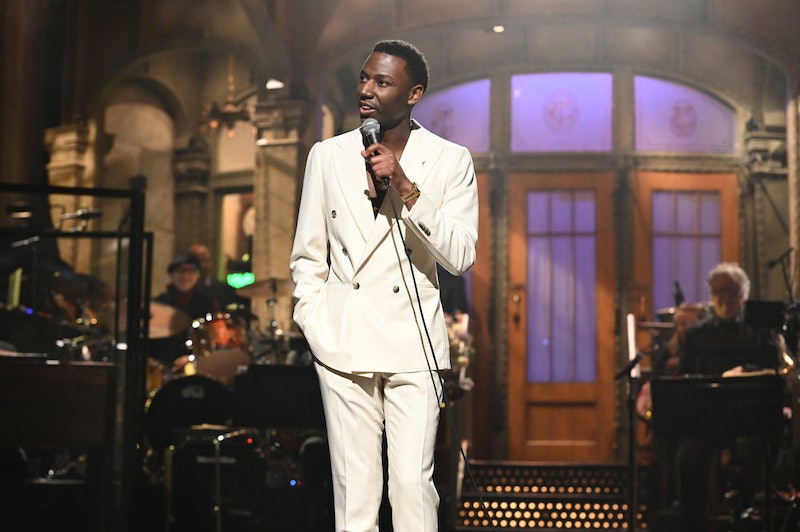 Will Heath/NBC
By Grace Wehniainen
April 3, 2022

Unless you recently took a week off (from work, life, and the internet), you know that the Will Smith-Chris Rock Oscars slap has been analyzed from nearly every angle possible — from celebs who were there to celebs who weren’t to ABC execs who assured viewers that the joke that preceded said slap was definitely not scripted. But during Jerrod Carmichael’s April 2 Saturday Night Live debut, the show proved that there was one more perspective we hadn’t heard from yet: that of hapless seat filler.

A day after Smith’s resignation from the Academy of Motion Picture Arts and Sciences — aka, the Oscars voting body — the SNL Oscars slap sketch featured Carmichael as a seat filler who finds himself inches away from the King Richard star during the fateful moment. (If you’re not an awards show aficionado, a seat filler is someone who takes the place of an ~official~ guest should they step away to use the bathroom or visit the bar. An actual Oscars seat filler recounted her experience at the 2022 show for Insider, and it’s a pricey gig!)

Carmichael’s character is a serious fan of Smith (“Gettin’ Jiggy Wit It” is still his ringtone, he admits) and he breaks seat filler etiquette to chat up his hero. He even dares to ask for a selfie, a request which Smith (Chris Redd) is kindly willing to oblige — but first, he just has a little matter to take care of on stage.

After Smith returns to his seat, a confused and uncomfortable Carmichael is suddenly just fine skipping the selfie. “That’s OK,” he says. “I deleted my phone.”

Smith seems totally unbothered by the slap, though — in fact, he’s all smiles until he brings up Jada Pinkett Smith’s talk show, on which she revealed she’d had an “entanglement” with August Alsina. “Man, the last couple years have been crazy, you know? With COVID, Zoom meetings... Red Table Talk. Y’all ever seen Red Table Talk?” he says.

It wasn’t that surprising to see SNL take on the Oscars slap — in what world would they not? But earlier in the show, Carmichael said he was ready to move on from the conversation altogether. “It feels like we’ve been living in the wake of it our entire lives,” the comedian said in his monologue. “It happened on Sunday. On Sunday. It’s Saturday, bro ... I promised myself I would never, ever talk about it again. Then Lorne [Michaels] came into my dressing room. He was like, ‘I think you need to talk about it.’ He said, ‘The nation needs to heal.’”