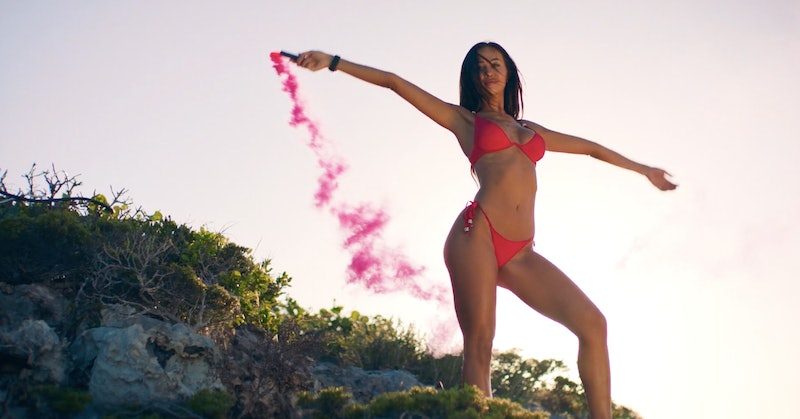 With Season 2 of Netflix’s Too Hot To Handle already in full swing, audiences can rejoice with the return of one of the streaming service’s horniest shows to date. Unlike Season 1, Netflix isn’t streaming every episode at once, instead electing to drop groups of episodes each week. In doing so, Netflix is able to imbue a little more drama than is already present in the show, leaving fans with cliffhangers instead of resolutions. Their most recent cliffhanger saw Lana warn the current cast of potential eliminations as well as new arrivals, one of which is Tabitha Clifft. Here’s everything to know about her.

Tabitha should feel right at home in the Too Hot villa, which is currently occupied by three other UK cast members. Tabitha joins Cam, Emily and Nathan, all of whom hail from the United Kingdom, and have been treating audiences’ ears to their variance of accents. Tabitha currently lives in London, though according to her LinkedIn, she spent years living abroad in Bali and Australia.

Tabitha Is An Entrepreneur

Tabitha certainly fits the bill of a Too Hot cast member, in fact she gives off similar vibes — at least aesthetically — to Season 1’s breakout star Francesca Farago. Each are dark-haired, doe-eyed models with social media side-hustles; both seem increasingly comfortable in a bathing suit. Whether or not Tabitha will utterly disregard the rules, costing everyone a ton of money like Francesca did ultimately remains to be seen.

But Tabitha is more than just a model. She’s also an entrepreneurial trainer, committed to helping her clients “glow up.” According to her website, Glow by Tabitha, you can “Unlock Tabitha’s Booty Secrets.” Among other fitness plans, Tabitha sells programs for those hoping to achieve “a rounder, more toned and lifted bubble-butt.” Tabitha’s desire to sculpt potential clients goes beyond their glutes, as she states on her website, “My aim is to make girls fall in love with themselves again. Changing not just their body, but their lifestyle too.” Should we take Tabitha at her word, it could stand to reason that she does have some insight into the self-love and self reflection that Lana is looking for.

How Will Tabitha Fare On The Beach?

Despite Tabitha’s aforementioned mission statement about self improvement, her brief presence in the Season 2 trailer doesn’t necessarily line up with themes of self-discovery. She’s seen canoodling with Chase during a brief moment in the trailer, and also appears to loom over a cliff, waving a red smoke flare, which isn’t technically a red flag, but it’s literally pretty close. Tabitha also acts as the capper on the trailer, where she appears to be on a double date with French adonis Marvin, Chase, and fellow newcomer Elle. Elle toasts to a “deep chat,” before Tabitha interjects and adds “and deep penetration.” It’s a toast that Lana probably isn’t too thrilled about.

The quick clip could also give some context to future drama in the villa. By the looks of it, Tabitha is on a date with Marvin, and given that we know new arrivals get to choose their first dates, it stands to reason Tabitha may immediately create friction with Melinda, who spent the first four episodes playing a flirtatious game of cat-and-mouse with Marvin. Whether or not Tabitha finds love is ultimately still unknown, but if anything is for sure, it certainly seems like she’ll be whipping up drama the second she steps on the beach.