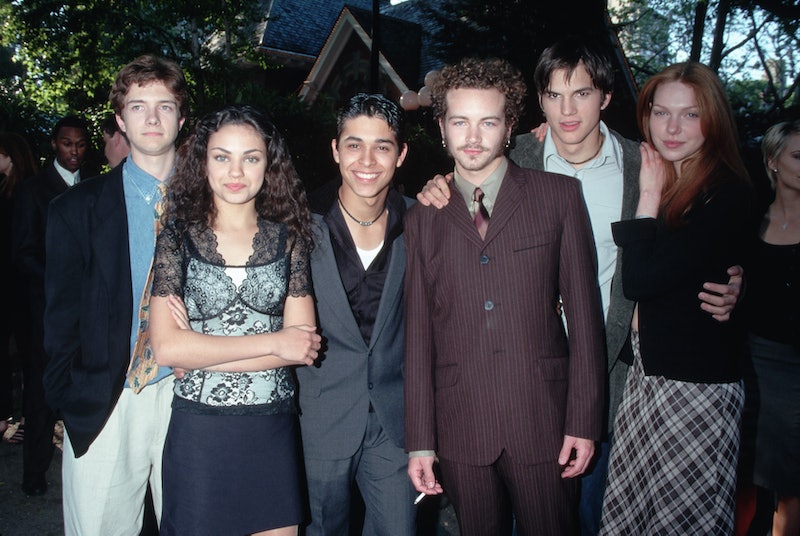 That ’70s Show ran for eight seasons on Fox from 1998 to 2006 and launched the careers of several high-profile actors, including Ashton Kutcher, Mila Kunis, Topher Grace, Laura Prepon, and Wilmer Valderrama. Set in the late 1970s, the period comedy centered on six teenage friends living in fictional Point Place, Wisconsin, as they navigated high school, friendships, and young love, processing it all by smoking tons of marijuana. The beloved sitcom has received continuous fanfare thanks to its longtime availability on Netflix, though it left the platform in September 2021. However, the streaming service announced on Oct. 8 that a spinoff titled That ’90s Show is in the works, and now several original cast members have already been confirmed to appear. Here’s everything to know about Netflix’s That ’90s Show, including its plot, cast, trailer, and release date.

Alongside the series’ announcement on Oct. 8, Netflix revealed That ’90s Show, like its predecessor, will take place in Wisconsin. Set in 1995, the spinoff will center on Leia Forman, aka the daughter of Eric Forman (Grace) and Donna Pinciotti (Prepon), as she visits her grandparents, Kitty (Debra Jo Rupp) and Red Forman (Kurtwood Smith), in Point Place for the summer. There, she will form bonds with a new generation of teenagers and explore sex, drugs, and rock ’n’ roll — just like those who came before her.

Original series creators Bonnie and Terry Turner will work on That ’90s Show as executive producers, while co-creator Mark Brazill will act as showrunner. The series marks Terry Turner and Brazill’s second attempt to expand the franchise. Midway through the initial run of That ’70s Show, they joined forces to launch That ’80s Show in 2002, an indirect spinoff that centered on Eric’s cousin Corey Howard (Glenn Howerton) and his group of 20-something friends in San Diego, California. After one 13-episode season, That ’80s Show was canceled by Fox.

Familiar faces will definitely be on That ’90s Show, as Rupp and Smith are reprising their roles as Kitty and Red in addition to executive producing the series. This time, the beloved onscreen couple will be keeping their eyes on their granddaughter, Leia.

Mace Coronel (Wireless) plays Jay, Nate’s BFF who’s “charming and flirty” and “armed with a video camera,” while Sam Morelos (Extraordinary Night) plays Nikki, Nate’s driven girlfriend with a rebellious streak. Rounding out the gang is Ozzie, who is gay, “sarcastic,” “insightful,” and played by Reyn Doi (Side Hustle).

Some of the original cast members previously voiced hesitations about returning for any spinoff. In a 2016 interview with People, Valderrama said, “Fez will never happen again.” That same year, Kutcher told Entertainment Weekly, “That ’70s Show is a nostalgic show. I think it was nostalgic as it was being made, and now it’s nostalgic for a different reason. And I just don’t know that anything that we’re going to do that would be new would be better than what we did. And when you run that risk, I think it’s better to leave things alone.” However, in February 2022, Deadline reported that Kutcher, along with Kunis, Grace, and Prepon, were in negotiations to come back.

Sure enough, five of the original six teenagers at the heart of That ’70s Show have reached deals to appear on the follow-up series as guest stars, Variety reported on April 30. Grace and Prepon will return as Eric and Donna, Leia’s parents, while Kutcher, Kunis, and Valderrama will reprise their roles as the couple’s friends Kelso, Jackie, and Fez, respectively. Danny Masterson, who played Hyde, will not return amid his ongoing legal issues.

After That ’70s Show, Masterson went on to appear in films and television series, including Yes Man and Netflix’s The Ranch. In March 2017, four women accused Masterson of sexual assault, and a fifth woman made rape allegations in December 2017; he has denied all the accusations. In June 2020, he was charged in with raping three women in the early 2000s and pleaded not guilty. The criminal case is moving forward, and Masterson’s his first criminal trial is set for August.

There are two additional That ’70s Show vets who aren’t expected to return for disheartening reasons. Lisa Robin Kelly, who played Eric’s older sister, Laurie, in Seasons 1-3, left the series in 2001 due to issues with alcohol abuse, per ABC News. She briefly returned for four episodes in Season 5 but was later replaced by Christina Moore for Season 6. The actor died in her sleep at age 43 on Aug. 15 due to what The Los Angeles Department of Coroner later concluded was an accidental unspecified oral “multiple drug intoxication,” per Westside Today.

Kitty’s best friend and Donna’s mother, Midge Pinciotti, was played by Tanya Roberts, also known from ABC’s Charlie’s Angels and the 1985 James Bond film A View to a Kill. When her husband, Barry Roberts, fell terminally ill in 2001, she exited That ’70s Show after Season 3. The actor returned to the series for guest appearances in Seasons 6 and 7 before officially retiring from acting in 2005. After experiencing illness due to her history of hepatitis C, Roberts died on Jan. 4, 2021, at 65 years old.

Smith shared the first image from That ’90s Show to his Instagram account on April 30. The snap shows Red and Kitty in a very familiar-looking setting. “Same Red and Kitty. Different decade,” he captioned the post.

Netflix has yet to unveil the release date or trailer for That ’90s Show. If it follows many of the streaming service’s other series, viewers can expect episodes to drop about a year after the show enters production, though that date is also to be determined. Smith’s first photo is a mark of progress, but it will still be a while before the trailer is ready.

This post will be updated as more details about That ’90s Show become available.

This article was originally published on Oct. 13, 2021