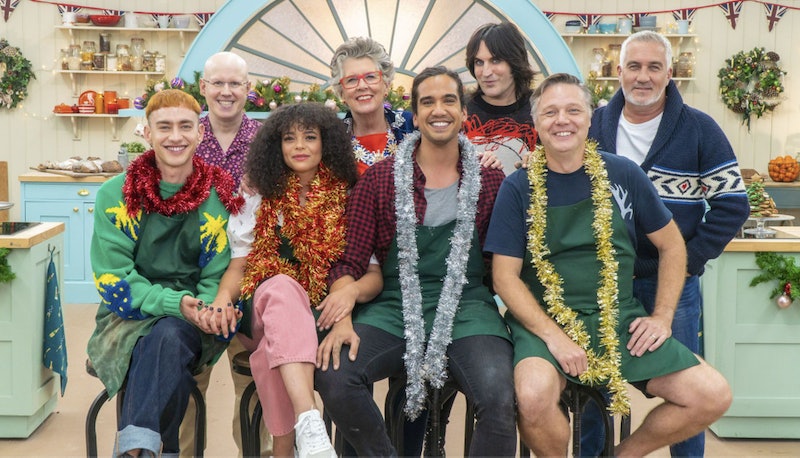 Every year, The Great British Bake Off provides viewers will a weekly treat of gentle, good-humoured content. For one hour, we get to sit down in front of the telly with a cup of tea and forget about our to-do lists and unopened emails and just enjoy watching people try to make a nest out of spun sugar. The latest series is currently airing on Channel 4 but, as we approach the grand finale, fans are likely wondering when they’ll next get to see Noel, Matt, Prue, and Paul.

Luckily, there isn’t long to wait as Channel 4 has announced details of its annual Bake Off Christmas special – and the guest list may just be one of the most exciting yet. Keep reading to find out everything we know so far.

Who Will Be On The 2021 Bake Off Christmas Special?

The stars of the award-winning Channel 4 drama It’s A Sin will be baking some festive treats for Prue and Paul this year, with Olly Alexander, Lydia West, Nathaniel Curtis, and Shaun Dooley all appearing on the show.

Written by Russell T Davies, It’s A Sin was one of the year’s stand-out dramas, telling the story of a group of friends living in the shadow of the AIDS crisis in London. The show was streamed more than 18.9 million times and helped to drive an increase in HIV testing across the country.

Prior to appearing in It’s A Sin, Alexander was known for being the frontman for Years & Years, while West previously starred in another Russell T Davies’ BBC show (also named Years & Years). Curtis has only one other acting credit to his name, in miniseries The Witcher: Blood Origin, and Dooley has appeared in Misfits, The White Queen, Broadchurch, Doctor Who, The Witcher, Official Secrets, Innocent, and is the narrator for another Channel 4 show, SAS: Who Dares Wins.

Sharing his excitement about appearing on Channel 4’s flagship baking show, Alexander wrote on Twitter, “EEEE !!!! I’m baking with my It’s A Sin family this Christmas.”

Curtis also shared his joy: “It’s beginning to look a lot like... me screaming at an oven at Christmas.”

When Will The 2021 Bake Off Christmas Special Air?

Channel 4 have yet to announce the air date for their 2021 Bake Off Christmas special but, going by last year’s schedule, Christmas Eve is out best bet. Watch this space.

More like this
'Love Island' Has Added Yet Another Bombshell To The Villa
By Bustle UK
Spencer Matthews’ Impressive Net Worth Expands Far Beyond Chelsea
By Sam Ramsden
Charlotte Crosby’s Net Worth Shows How Far She’s Come Since 'Geordie Shore'
By Darshita Goyal
Barney Walsh Has Been Linked With This Famous Miss World Winner
By Sophie McEvoy
Get The Very Best Of Bustle/UK
Sign up for Bustle UK's twice-weekly newsletter, featuring the latest must-watch TV, moving personal stories, and expert advice on the hottest viral buys.