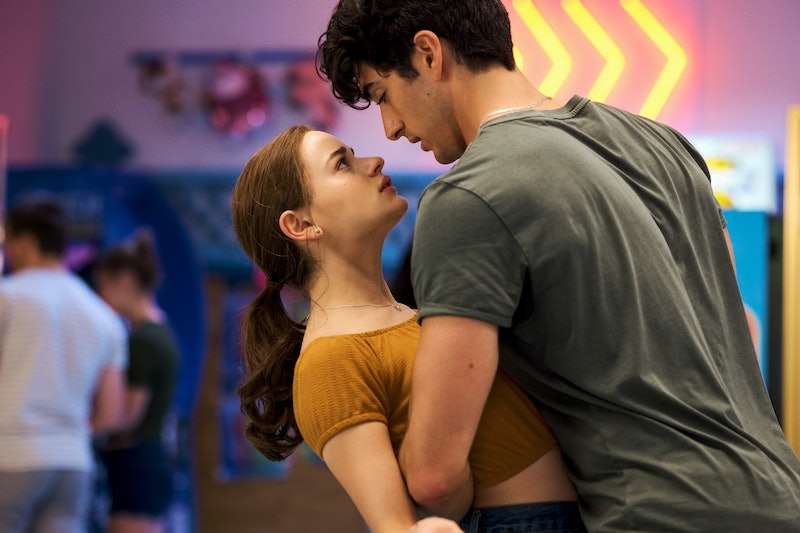 The Kissing Booth was a sleeper hit when it first hit Netflix in 2018, but the teen rom-com eventually found its audience. The movie was re-watched by nearly half its viewers, and amassed enough of a fanbase to get not one, but two sequels. With The Kissing Booth 3 now available on Netflix, the trilogy is coming to a close — and viewers will finally learn what happens to the franchise’s young protagonists.

The first film follows Elle (Joey King) and Lee (Joel Courtney), two teenagers who see their friendship tested by Elle’s romantic life. The sequel further complicates the pair’s relationship, when Elle must decide whether to attend college with Lee or her boyfriend — but leaves Elle’s choice a mystery, to be revealed in the third film.

Before jumping into The Kissing Booth 3, check out a quick recap of the first two movies below.

Elle and Lee are lifelong BFFs.

Lee and Elle have been best friends since birth, literally: They were born at the same hospital at the same time. Over the course of their friendship, they’ve compiled a list of strict rules to follow as best friends, most notably this one: relatives of your best friend are “OFF LIMITS” for romance. Abiding by this stricture proves to be difficult for Elle when she begins to fall for Lee’s brother, Noah (Jacob Elordi).

Elle lies about Noah’s involvement in the kissing booth.

Elle and Lee are tasked with coming up with an idea for their high school’s fall fundraiser. They suggest running a kissing booth, which is met with lukewarm reception until Elle lies and says it will be helmed by Noah, who is known as the school’s heartthrob. She approaches Noah at a party to ask him to lead the booth, and he refuses — so she again lies, and says he’s in. Elle then proceeds to get drunk, and wakes up in Noah’s bed the next morning. (Don’t worry, it’s innocent: Noah only took Elle home because she couldn’t safely get home herself.)

The day of the kissing booth arrives, and it turns out that the participants will be blindfolded before they receive their kisses — meaning they’ll have no idea whose lips will meet theirs. The booth is a hit, until people start to realize that Noah isn’t there, and chaos ensues. When he does arrive at the eleventh hour, the entire school watches as Elle gets her first kiss.

Lee finds out about the forbidden romance.

Elle and Noah begin secretly dating — both to spare Lee’s feelings, and because it’s clearly against the rules of Elle and Lee’s friendship. The couple almost get caught several times before they actually get caught: Lee walks in on Elle and Noah kissing and is pissed, to say the least. Elle and Lee eventually reconcile, but Elle breaks up with Noah in the midst of all the chaos. She attends prom with Lee and his new girlfriend Rachel, whom he met at the OG kissing booth.

Elle and Noah break up, but get back together.

In an act of desperation, Noah confesses his love for Elle in front of everyone at prom. She leaves in a fit of tears, but not because she doesn’t love him back — she does. She’s just prioritizing her friendship with Lee over her feelings for Noah.

But then, Lee realizes that rules are meant to be broken and that he just wants Elle to be happy, so he gives his blessing to Elle and Noah. They speed to the airport, where Noah is flying across the country to start school at Harvard. There, they reconcile and agree to a long-distance relationship.

Elle is tempted to break another rule.

The Kissing Booth 2 starts with Lee and Elle beginning their senior year of high school. Lee and Rachel are still dating, as are Noah and Elle. When it comes time to apply for college, the BFFs are set on attending UC Berkeley together. (As rule #19 states, “Always go to the same school as your bestie.”) But Noah wants Elle to attend college in Boston so they can be together, and she decides to apply to a few Boston schools, including Harvard, to keep her options open. She doesn’t tell Lee about that last part though.

The dance club votes to put on another kissing booth for this year’s fundraiser. And like last year, Elle and Lee have trouble finding the right people to run the booth. That is, until Marco (Taylor Zakhar Perez), the new hunk at school, becomes the most requested person for the job. After an embarrassing incident, in which the whole school hears Elle thirsting over Marco on the school’s intercom, he challenges her to a game: If she wins, he’ll man the kissing booth. Of course, she wins.

There’s trouble in paradise for Lee and Rachel.

Meanwhile, Elle and Lee practice nonstop to win a dance contest with a large cash prize, which Elle plans to use to pay for college. Unfortunately, their constant rehearsals leave little time for Lee to see Rachel; feeling ignored, she breaks up with him. Lee fakes an injury to get out of rehearsals to spend more time with Rachel, and soon Marco steps in to replace him. Elle and Marco begin to grow close — a little too close.

Elle isn’t the only one getting close to someone else. In Boston, Noah befriends Chloe (Maisie Richardson-Sellers), and Elle feels threatened. It doesn’t help that she finds Chloe’s earring under his bed, as well as a suggestive text message from her on his phone. He promises that nothing is going on, and she believes him.

After endless practicing, Elle and Marco arrive at the Dance Dance Mania contest ready to win. They perform flawlessly, and take home the trophy after sharing a passionate kiss at the end of their set. However, Noah is in the audience and witnesses Elle cheating on him. Basically, everyone breaks up with each other and they’re all miserable for approximately 10 minutes. Oh, and Lee finds Elle’s other college applications, so they’re arguing too.

Unsurprisingly, everyone gets back together.

Okay, back to the kissing booth. After Lee wins Homecoming King, everyone reconciles. Elle and Lee are friends again, and Elle plans for Lee and Rachel to kiss at the kissing booth, resulting in them getting back together.

But things are still up in the air for Elle and Noah. When it’s time for Elle’s turn in the kissing booth, Marco approaches her — but he just wants to talk. Elle realizes that she loves Noah, not Marco, and (again) races to the airport to tell him how she feels. However, Noah has just left the airport (after some encouragement from Chloe) to do the same thing. They get back together.

What’s next for Elle?

The film ends with a massive cliffhanger. When it comes down to deciding where to attend college, Elle is still unsure. She tells Lee that she’s been waitlisted at both UC Berkeley and Harvard and has yet to make a decision. That last part is sort of true — but she’s actually been accepted to both schools, and is unsure if she should stay loyal to Lee or follow her heart to Noah.

The Kissing Booth 3 is now streaming on Netflix.