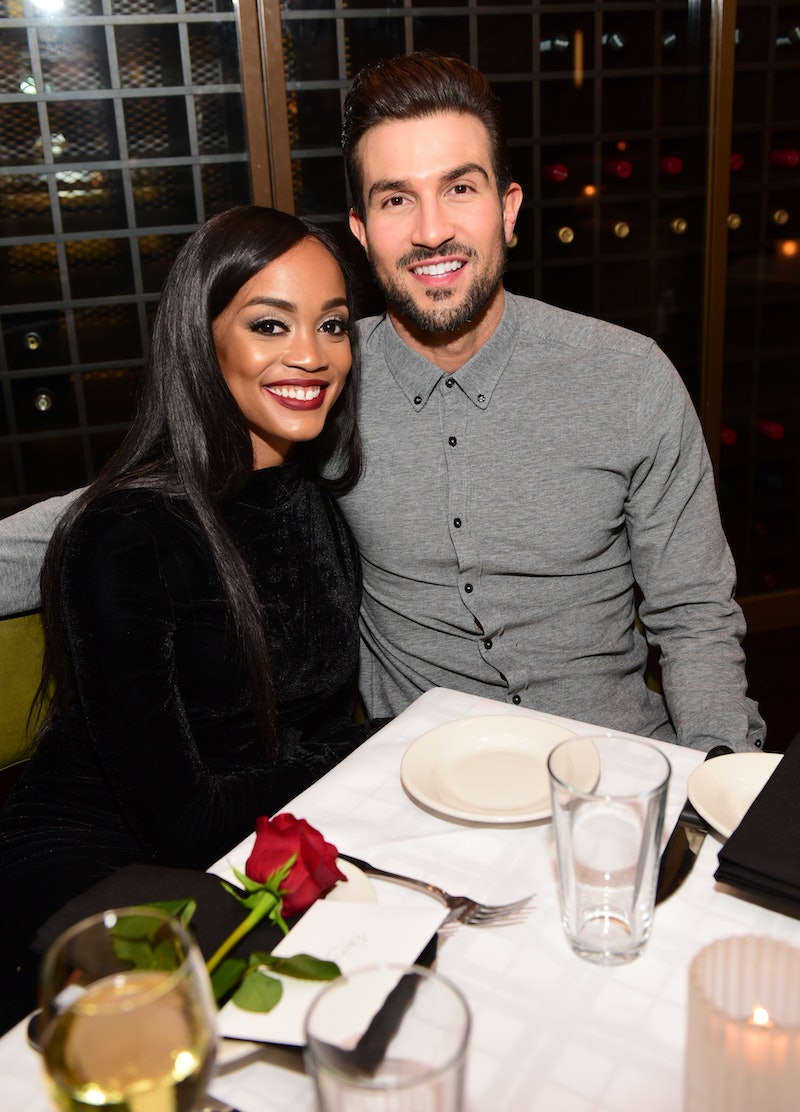 The Bachelor franchise’s premise may involve falling in love, but it doesn’t have the best track record when it comes to actually creating long-lasting relationships. Of the 26 Bachelors so far, only five are still with their final rose picks — and that’s even counting two leads who changed their minds and picked their runner-ups after filming. The Bachelorette has been slightly less successful, with four of the women either married or engaged to their final rose recipient.

To date, Sean Lowe’s final pick and now wife Catherine Lowe (née Giudici) remains the only final rose recipient married to a Bachelor. She recently told E! News that she thinks so many Bachelor/ette relationships fizzle because of the transition from forming a relationship on reality TV to establishing one in the real world. “I think genuinely people really want to find love but there’s so many factors involved,” she said. “There are so many things against you after you leave the show...I’m really grateful and blessed that Sean and I saw this wonderful life after but I can say that it is really hard to get there.”

Some couples, like Season 11 Bachelorette Kaitlyn Bristowe and Season 14 contestant Jason Tartick, met through mutual Bachelor Nation connections without ever having appeared on TV together. Meanwhile, the more recent Bachelorette seasons have had a zero success rate, following the breakups of Michelle Young and Nayte Olukoya, Katie Thurston and Blake Moynes, Tayshia Adams and Zac Clark, and Clare Crawley and Dale Moss over the past year. There is still some happy news though. Not including Bachelor in Paradise, here are the nine other couples still going strong.

The Bachelor Season 26 had one of the franchise’s messier endings when Clayton admitted to being in love with Susie, Gabby Windey, and Rachel Recchia — but only after sleeping with the latter two during the Fantasy Suites. After Susie self-eliminated, Clayton begged Gabby and Rachel to stay, only to change his mind and send them both home before the final rose ceremony. Though Susie rejected Clayton in the finale, the two reconciled after filming wrapped and revealed they were back together during ABC’s After the Final Rose special. When Gabby and Rachel made their debuts as joint Bachelorettes in July 2022, Clayton and Susie were still going strong — judging both from their loving Instagram posts, as well as the fact Susie defended her man on TikTok after the premiere threw shade at him.

Although Rachael accepted Matt’s final rose (albeit without a proposal), the pair broke up before the After the Final Rose special aired in March 2021. While Matt’s season was airing, photos of Rachael dressed up for an antebellum-themed party in college surfaced online, along with other accusations of racism. Matt initially defended Rachael, who issued an apology for her “offensive and racist” actions in a statement on Instagram. However, he ultimately decided it was best that they part ways, explaining that he felt Rachael — a white woman — did not meaningfully comprehend his experience as a Black man in America.

A month later, in April, Matt confirmed to People that he and Rachael had gotten back together. “I will say that, you know, of course it was difficult in the moment, but just being able to step back and work on our relationship to assess,” Rachael told People in July 2021. “Taking a moment away from the spotlight’s been really good for us. It’s been a lot better.”

Later, Matt explained to the Los Angeles Times why he and Rachel had been successful — while also throwing shade at some of his Bachelor Nation co-stars. “Rachael and I have moved on. We’re one of the only couples from that franchise still going strong,” he told the paper in June 2022. “The reason is we’re going at things at our own pace. We’re not playing games that a lot of people play just to stay in that circle.”

Two years after falling in love on The Bachelorette Rachel and Bryan got married in Mexico in 2019. At the outset of the coronavirus pandemic, the couple was living on opposite coasts, with Rachel hosting Extra in Los Angeles and Bryan continuing to work as a chiropractor in Miami. However, Bryan relocated to LA in April 2021 and he and Rachel have been enjoying living together as a married couple ever since. As Rachel captioned an April 1 Instagram post: “Not an April fools joke. RnB are back where we belong – together.”

Now, the couple is looking to start a family. “We have a new house, we have our dogs, we have everything we could ask for and kids definitely coming in the future,” Bryan told Entertainment Tonight in June 2022. “We're just loving life right now.”

Arie’s 2018 After the Final Rose special was truly one of the most dramatic in Bachelor history. After getting engaged to and later breaking up with his final rose winner Becca Kufrin, he proposed to his runner-up Lauren. The two eventually got married in Hawaii in January 2019, and they’re now parents to three children: three-year-old daughter Alessi and twins Lux and Senna, who they welcomed in June 2021.

Months later, Arie decided he was done having children and shared that he underwent a vasectomy in February 2022. “If I was 30 I don't think I would have gotten a vasectomy,” he said, highlighting his and Lauren’s 10-year age gap. “I don’t want to be a super super old dad.” Their twins turned one in June 2022 though, and as Lauren wrote on Instagram, “Our life may be a circus, but I wouldn’t trade it for the world.”

Though JoJo accepted Jordan’s proposal during Season 12 of The Bachelorette in 2016, the pair took their time tying the knot. They planned to get married in June 2020 but postponed their wedding to May 2021 due to the coronavirus pandemic. They postponed again after the date got closer, and it became clear it still wasn’t safe to host such a big event. However, JoJo told Access Hollywood in May that the delays aren’t a big deal because they’re “totally committed to each other” and “feel married already.”

Still, they made it official and eventually got married on May 14, 2022. “It feels so good! It took a while to get here but it was all so worth it,” JoJo told People following the “intimate” ceremony at Sunstone Winery in Santa Ynez, California. “We are FINALLY married!!! Can’t wait to start this next chapter of our life together.”

Desiree and Chris had to overcome a lot of criticism about their relationship after Desiree’s frontrunner Brooks Forester left her season, leading many fans to think she’d settled for Chris. “I was accused of being fake, and the internet at large declared that he was a rebound,” Desiree wrote in her 2021 book, The Road to Roses.

But eight years after her season ended, Desiree and Chris are still happily married after tying the knot in January 2015. They now have two sons: Asher Wrigley, 5, and Zander Cruz, 3.

Sean and Catherine’s engagement in Season 17 of The Bachelor preceded the franchise’s first-ever live TV wedding in 2014. Fast-forward seven years, and the Lowes are living in Dallas with their three children: sons Samuel, 5, Isaiah, 3, and daughter Mia, who they welcomed at the end of 2019. In a November 2020 birthday tribute to Sean, Catherine called him her “dream man,” writing that she “can't imagine going through life with a better partner.”

In April 2022, Catherine told People that she didn’t plan on having any more children — though their family could still expand. “We’re still kind of looking into adoption, but I think biologically, we're done, sad to say,” she shared. Around the same time, she and Sean did end up adopting — a Bullmastiff puppy named Gus.

In perhaps the first major Bachelor finale shocker, Jason broke up with his then-fiancée and final rose winner Melissa Rycroft during his 2009 After the Final Rose special in order to pursue his runner-up and now-wife, Molly. It worked out in the end: Jason and Molly celebrated their 12th wedding anniversary in February 2022 after marrying in a televised 2010 ceremony. “We are literally in the best place of our lives,” Molly wrote while celebrating the milestone. “We’ve never been happier and more in sync than we are today. I don’t know if it is time — maybe aging/maturing — that got us to this place, but whatever it is, I hope it lasts forever!” The couple welcomed a daughter, Riley, in March 2013, and Jason is also a stepdad to Melissa’s teen son Tyler.

After getting engaged in the Season 1 finale, ABC’s first Bachelorette married Ryan in a televised ceremony in December 2003. Since then, the Colorado-based couple has welcomed two children: son Maxwell Alston in July 2007, and daughter Blakesley Grace in April 2009. In May 2021, Trista revealed that Ryan had been diagnosed with Lyme disease and was having difficulty with his symptoms. “It's been hard, to see him struggle, because he is such a strong human in general,” she said on Ben Higgins and Ashley Iaconetti’s Almost Famous podcast. “But he doesn't share that with everyone. So it's just hard to see the person you love most in the world feeling like crap.”

Following a difficult year of treatments following Ryan’s diagnosis, the couple gave People a health update in June 2022, with the firefighter sharing that the “tide is turning” and he is “feeling better.” Added Trista, “Ryan is so strong. And I know we can get through anything.”

Stay tuned to find out if Gabby and/or Rachel will join the ranks of successful Bachelor/ette couples.

More like this
Zach Swears He Didn’t Look Up Contestants Before The Bachelor Began Filming
By Brad Witter
10 Photos Of The Wildest Limo Arrivals From 'The Bachelor' Premiere
By Brad Witter
The Bachelor’s Christina Mandrell Comes From One Of Country Music’s Most Famous Families
By Brad Witter
A Guide To All Of Zach Shallcross' 'Bachelor' Filming Locations
By Brad Witter
Get Even More From Bustle — Sign Up For The Newsletter
From hair trends to relationship advice, our daily newsletter has everything you need to sound like a person who’s on TikTok, even if you aren’t.