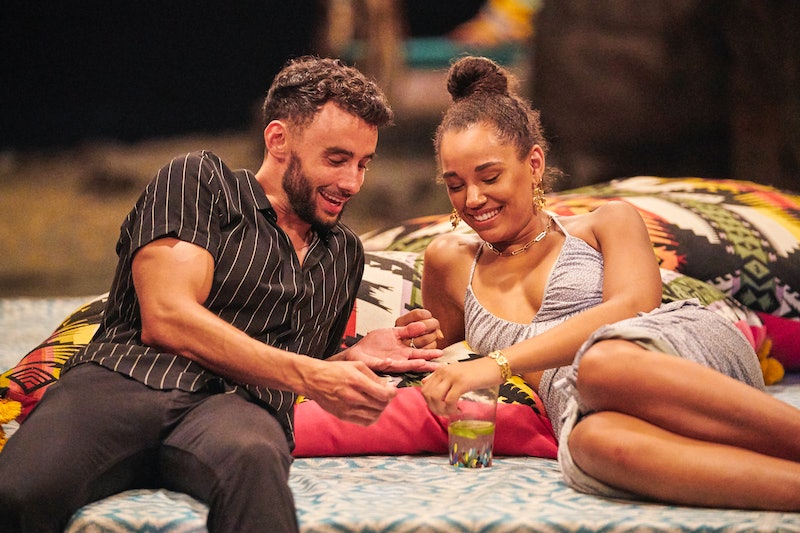 The moment we’ve all been collectively manifesting finally happened: Brendan Morias and Pieper James have left Bachelor in Paradise.

During the Sept. 14 episode, the rest of the cast confronted Pieper and Brendan in a heated conversation. Brendan finally admitted that he went on dates with Pieper before the show and that they were together the day before he headed to Mexico, while Pieper said she “couldn’t be more be clear” that she only came to Paradise to see Brendan.

Initially, the couple was defensive and aggravated, mentioning repeatedly that they didn’t know about the Paradise “rulebook.” They then walked out and proceeded to talk about how Pieper could still make money and gain more followers without going on the show. She was also heard telling him, “I told you I didn’t wanna come.” Moments later, Brendan finally announced that they were leaving.“This is the girl I wanna be with. I wanna leave with her and we’re gonna do that on our own terms. So, take care guys,” he said.

Most of their costars were visibly happy about their exit. Demi Burnett, who exchanged words with Brendan moments before, was celebrating. Twitter also had a field day over the confrontation and exit, posting memes about Joe and his “mob of disgruntled females” (Brendan’s words, obviously).

The couple’s exit was inevitable. Though Brendan initially pursued a relationship with Natasha Parker, he confirmed he’d hung out with Pieper before the show. He assured Natasha that the relationship was purely casual, but as soon as Pieper arrived on the beach, she made a beeline for Brendan. During their one-on-one date, she thanked him for “playing the game” until her arrival and even called him her boyfriend, while Brendan murmured to producers he didn’t do anything wrong because Natasha didn’t have any other “prospects” anyway.

After the episode aired, viewers decried Pieper and Brendan online, and their follower counts on Instagram plummeted. Initially, the two were pretty flippant about their behavior. Brendan posted a now-deleted poolside photo captioned, “Here for the wrong reasons,” while Pieper posted a TikTok video lip-syncing to Lizzo’s song “Rumors” and a photo on Instagram with a caption, “All’s fair in love in war.” The video has since been deleted and the Instagram caption removed. Pieper also reminded fans via her Instagram Stories shortly after the episode aired that, “reality TV isn’t real.”

Both have since (sort of) apologized. On Sept. 8, Brendan issued a statement on his Instagram Stories. “After taking time to begin to process the events that unfolded over the past few days, I have realized I was wrong on so many different levels,” he wrote. Addressing Natasha directly, he added, “Most importantly I apologize to you Natasha. I hurt you. I am deeply sorry for doing so. I understand that the damage is already done and all I can do going forward is acknowledge the error of my ways.”

Pieper, meanwhile, told Us Weekly on Sept. 9 that she had already spoken with Natasha before the show about Brendan, but that she was “truly sorry for any hurt” that she caused and hoped to “get the opportunity to speak to her soon and make things right.”

Natasha clarified what she knew about Pieper and Brendan’s pre-existing relationship on the Sept. 9 episode of Clickbait. She told co-hosts Tayshia Adams and Joe Amabile that she met Pieper once and that Pieper told her she “had recently started talking to” Brendan. However, “Just because you meet someone doesn’t mean that you’re dating,” she added. “Just because you’re talking to someone doesn’t mean you’re in a relationship. So I found it very interesting that he was there and his reasoning was, ‘Oh, that was just a casual thing.’ So I believed him.”

Whatever Pieper and Brendan’s understanding was ahead of the show, it seems like they’re still dating after Paradise — or at least were. They were spotted together in Miami on Aug. 22, but haven’t been seen together since the controversy. “I’m not an extension of Brendan and his actions, and I don’t condone dishonest behavior,” Pieper told Us Weekly. “I got caught up in the moment while I was with Brendan in Paradise, and while I don’t fully blame editing, it doesn’t always tell the whole story.”