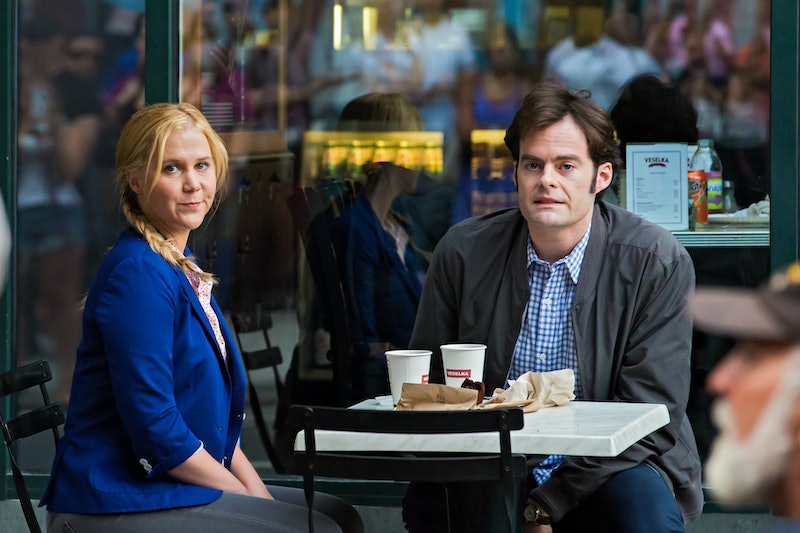 LeBron James gave one of the most unlikely comedic performances in recent memory when he starred alongside Amy Schumer and Bill Hader in 2015's Trainwreck. (It was even referred to as "The Greatest Movie Performance by an Active Professional Basketball Player" by The New Yorker.) He stole several scenes in the Judd Apatow-directed romantic comedy, playing a version of himself that doles out love advice to Hader's sports doctor character and skips out on restaurant tabs. Well, according to James and Schumer, plans for a Trainwreck sequel could be underway and teased the possibility on Tuesday.

Schumer, 39, shared a fan's request that she and James reunite for another project on her Instagram Story. "We need another film with both of you together. Trainwreck is too darn funny," the message, which tagged Schumer and James, 36, read. The comedian posted the comment on her Instagram Story, writing, "@kingjames is this time next year good for you?" James reposted the query to his own Story and replied, "I think we can make that happen! Trainwreck 2???"

Jokes aside, a sequel to the romantic comedy written by Schumer wouldn't be totally out of the question. The film grossed more than 140 million worldwide after its July 2015 debut, scored two Golden Globe nominations, and cemented Schumer as a comedic force. It also inspired a spoof sequel by Funny or Die.

In the sketch, the Cleveland Cavaliers player drives around his hometown of Akron, Ohio, alongside Schumer, Hader, and Apatow. He gives them a tour of the city just before the film's premiere, pitching ideas for a sequel along the way. The only wrinkle with James' plan is that it doesn't involve Hader or Apatow. James imagines Hader's character Aaron dying at the beginning of the film so he could become Schumer's love interest instead. He also names himself the proper director for the project, axing Apatow's involvement.

Of course, a follow-up to the original film hasn't been formally announced. As for why James was initially cast in Trainwreck, it was because "he's the only basketball player that I've ever heard of" Schumer jokingly admitted to MTV News. James recalled getting offered the part in an interview with Entertainment Tonight. "They were like, 'You're going to play yourself.' I was like, 'Okay, I can do that easily.' I can just show up, 'Hey, I'm LeBron. I can play basketball. I can shoot some jumpers. I can dunk,'" he remembered. But his role turned out to be much more substantial than the cameo he thought he landed. "It was like, 'No, you're actually going to be Bill's best friend in the movie, and you're going to be a love doctor. I'm like, 'Oh, so that means I'm going to have lines? Like more than one per scene?'"

Luckily, James nailed his supporting role alongside Schumer, Hader, and fellow athlete John Cena (who plays Schumer's character's ex). Since then, he's voiced a character in the 2018 animated movie Smallfoot and produced shows, including Netflix's Self Made: Inspired by the Life of Madam C.J. Walker. James is even set to star in another highly-anticipated sequel: a little movie known as Space Jam: A New Legacy.

More like this
Jennifer Coolidge Hunted For Jewels & Lashes In J.Lo’s Hotel Room
By Jake Viswanath
Paul Mescal’s Family Celebrated His Oscar Nomination In The Sweetest Way
By El Hunt
Theo James Would “Love” To Star In George Michael Biopic
By Sam Ramsden
Adam Lambert Called Out The George Michael Biopic Over Potential Casting
By Sam Ramsden
Get Even More From Bustle — Sign Up For The Newsletter
From hair trends to relationship advice, our daily newsletter has everything you need to sound like a person who’s on TikTok, even if you aren’t.