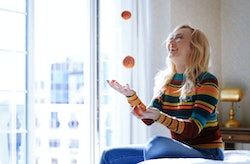 We all have that one friend who seems to be endlessly talented. They're chock full of cool life skills and useless party tricks, and thus never fail to be all sorts of impressive. You might catch them moonwalking across a dance floor, lighting a match with just one hand, or killing the selfie game on Instagram. Their skills and talents add flair to everyone’s lives, and leave everyone wondering how they got to be so cool.

People like this might seem magical, but the good thing is we can all be that talented and interesting, with just a few minutes of practice a day. Beyond impressing others, taking the time to learn a few new skills is fun, and incredibly useful for life in general. Have you ever tried to pick a lock? Or fold your shirts in just five seconds? Skills like these sure can come in handy, even when nobody's watching. What’s more is that these cool skills to learn don’t have to be just useful. Sometimes they’re just fun to do and keep yourself entertained. Ever solved a Rubik’s cube? Now that’s a skill that will get your friends talking.

Taking a few minutes each day to practice a secret talent can feel good, too. For example, the moment I finally learned how to juggle, I felt like I had unlocked some sort of life achievement. Learning something new is good for your brain, and your self-esteem. And all those moments where you truly impress people? They'll come later, when you come walking out of the mists like some kind of magician, leaving people swooning in your wake.

Below, a few easy-to-learn skills that are sure to impress everyone.

If ever there was a skill you needed in life, it's moonwalking. Popularized by Michael Jackson, the moonwalk is a dance move favorite. Whip this out at your next party, and everyone will be all sorts of impressed.

The next time you're cooking for friends and notice the knives are dull, simply pull out a steel (the thing you sharpen a knife against) and remedy the situation like a pro. Not only will a sharp knife make your chopping more efficient, but it'll make you seem so incredibly capable in the kitchen.

3. Whistle With Your Fingers

If you've ever wanted to be that person in a crowd who gets someone's attention with an ear-piercing whistle, now you can be!

Pen twirling is a fun way to pass the time, while impressing everyone around you with your super cool skills. Are you a drummer? Or some kind of magician? Let them wonder.

OK, so we all know how to hold our camera and snap a selfie. But have you ever wanted to take them to the next level? Get ready to stunt on everyone once you nail the secret to snapping the perfect angles.

Just like we all know how to take a selfie, we also already know how to tell a story. But there's a way to do it better. "Your own stories are the best. If you select one, hone it to the point of sharpness," says Dr. Marlene Caroselli, an author and keynote speaker. "Have at least one that is generic and can fit into any conversation and one that will be germane to the next gathering (business or social) you will attend. Practice the telling, making sure to keep the anecdote succinct." And don't be afraid to throw in a few funny one-liners.

Folding your shirts can be an agonizing task, if you're going about it the old-fashioned way. So good thing there's a cool, magical way to fold shirts in five seconds, that'll not only impress yourself, but also anyone who happens to walk by.

Let's say you're locked out of your apartment, and all your roommates are standing by, wondering what to do. You can a) wait for the super or the locksmith, or b) pick the lock yourself. It does require a wrench and a paperclip, so unless you have those things, you'll be SOL. But if you do, you'll be the hero of the day.

Whether you wear a tie, or your partner does, learning how to tie one with ease can make you look like a veritable magician. "When a man or woman has the perfect tie knot, it is not only appealing, but also appears mysterious, since not many know the art of tying it," says Dr. Aditi Gupta Jha, of JustDoc. Above, how to tie a windsor knot.

10. Light A Match With Panache

Shock everyone with your ability to light a match with one hand, before strolling off like it was no big deal. All you have to do is bend a match down over the end of a matchbook, then flick it with your finger across the striking pad, and voilà. (Side note: while you're practicing, please be careful.)

I was once obsessed with learning how to juggle (because hey, fun party trick) so I can say, first hand, that it is actually easier than it looks. In the video above, you can learn the basics in just 10 minutes.

Speed reading can come in handy when going over a terms and conditions (you read those, right?), getting through a book quickly for class, or simply checking more novels off your to-read list. All of which are very impressive.

Rubik's cubes look like they're only meant for math whizzes and geniuses. But I promise they're not impossible to solve — if you understand how they work. Instead of twisting the squares around and hoping for the best, there is a pattern you should be following. Once you get it down, you can solve these things in a few seconds. Check out the video above to get started.

14. Play A Song On Harmonica

The next time you're out and about, and someone picks up a harmonica (this happens, right?) be that person who can snatch it away and play a quick song. It may take a few days to learn the basic rhythms, but after that you'll be able to play a few tunes. See above for a great lesson on the basics.

It's easier than you think to say the alphabet backwards, especially since it fits into the same sing-songy alphabet song you already know.

Go ahead and add these skills to your repertoire, not only for yourself, but for the great amusement of all your friends.