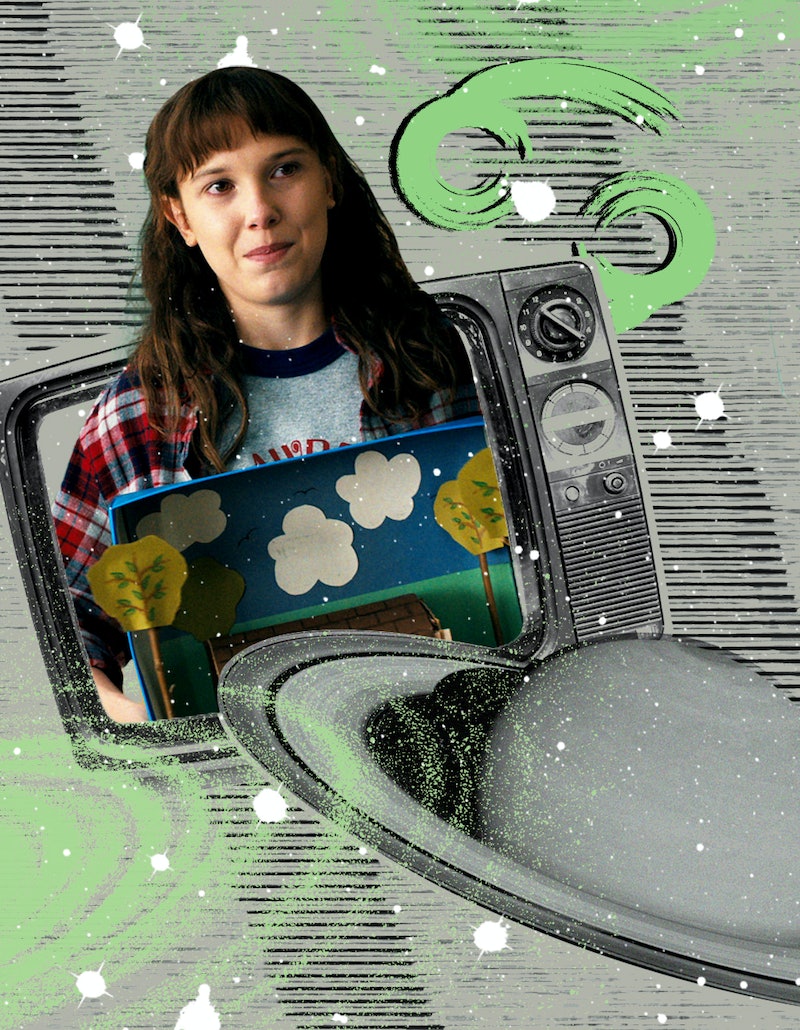 Even if you’re not into sci-fi-horror, it’s hard to deny the enormous impact Stranger Things has had since its 2016 debut. The critically acclaimed Netflix original has it all: supernatural suspense, inter-dimensions, love triangles, and monsters, not to mention mega ‘80s nostalgia. In the show, Eleven, played by Millie Bobby Brown, has a long track record of saving the town of Hawkins, Indiana, with her telekinetic and telepathic powers. With its mystical themes forcing us to suspend our disbelief for the umpteenth time in Stranger Things 4, the last two episodes of which debut on July 1, it totally makes sense that fans and astrology lovers alike would speculate about what Eleven’s zodiac sign would be.

Stranger Things: Suspicious Minds, a novel based on the series, sets Eleven’s birthday in June, and some fans theorize that it falls somewhere between June and July. That’s not the only evidence that the hyper-empathetic leading lady is a Cancer zodiac sign, though. “Water signs have a higher chance of connecting to their intuition than the rest because they are the most connected to their emotions, gut feelings, collective consciousness, and intuition,” Lauren Ash, an astrologer, tells Bustle. “And as the sign ruled by the moon, this heightens her connection to not only her own psychic powers but the collective energy of those around her.”

Read on for evidence that Eleven is most definitely a Cancer zodiac sign.

Eleven Is Connected To The Supernatural

Eleven’s connection to the paranormal — in this case, the dark, parallel dimension known as the Upside Down — is totally water sign behavior. Cancers are extremely spiritual and empathic, which is totally aligned with Eleven’s energy. It’s also why Eleven is able to bridge communication with the creatures from the Upside Down, says Ash. Not only does she have access to it, but she was the only one able to open the gates in the first place.

Eleven’s ability to transcend reality and tap into her powers is evidence enough pointing to her being a Cancer. In Season 2, Chapter 9, Hopper and Eleven are tasked with closing the portal to the Upside Down. Struggling to gain control to seal the gate, Eleven recalls the incidents in the lab along with the mistreatment of her mother. “Eleven levitates as she channels all of her pain and rage, successfully shutting the portal and saving the day,” Ash explains. The crab rules over our private, inner world, including intuition and psychic abilities, and Eleven’s unique capacity to channel her emotions into world-saving superpowers is textbook Cancer.

Who else would feel an immense duty to save the world from the plight of armageddon but a protective Cancer? Eleven’s leadership and deep purpose to rescue others is on-brand with the cardinal water sign, who steps up without question to protect those they care about. Cancers are often timid and private at first, much like Eleven at the start of the series, Ash explains. “However, much like the crab, she became fiercely protective and showed unwavering loyalty towards those who cared for her,” she says.

Think back to Season 2, Chapter 7, when she joined forces with Kali Prasad, played by Linnea Berthelsen, to exact their revenge on the scientists who tortured them as children. They seek out a former Hawkins Laboratory employee responsible for giving Eleven’s mother electric shock treatment while she was pregnant. Just as Eleven is about to strangle him using telekinesis, she finds out there are children at home and ends up showing him mercy instead. “Even in their anger, a Cancer will always show compassion and forgiveness,” says Ash.

What’s more, Cancers are associated with motherhood, which is a theme present throughout the series, from El’s pursuit of her biological mother to finding a surrogate mother in Joyce, played by ‘80s royalty Winona Ryder.

Her Powers Are Activated By Emotions

Cancer’s ruling planet, the moon, is associated with our inner world, including our private thoughts and emotions. While Eleven seems sweet and sensitive on the surface, her instincts allow her to go full-on defense mode when needed — and beneath Cancer’s sweet guise is a firecracker. Throughout the series, El’s anger is what revs up her powers, but she also uses the emotions of others to her advantage, too.

For example, in Season 3, Chapter 8, a powerless Eleven faces off with Billy Hargrove, played by Dacre Montgomery, who is bewitched by the Mind Flayer. “Eleven appeals to the human side of Billy, sharing what she witnessed when she entered his mind before,” explains Ash. In true Cancer fashion, Eleven uses her psychic intel to manipulate emotions, shaking Billy out of the Mind Flayer’s grip.

On the surface, Eleven is sensitive and sweet. Her ability to connect with others through emotions and open portals to the Upside Down is evidence of her Cancerian energy. But her kindness doesn’t stop her from weaponizing her compassion if the safety of her loved ones, or the world, is threatened — something all Cancer zodiac signs can relate to.