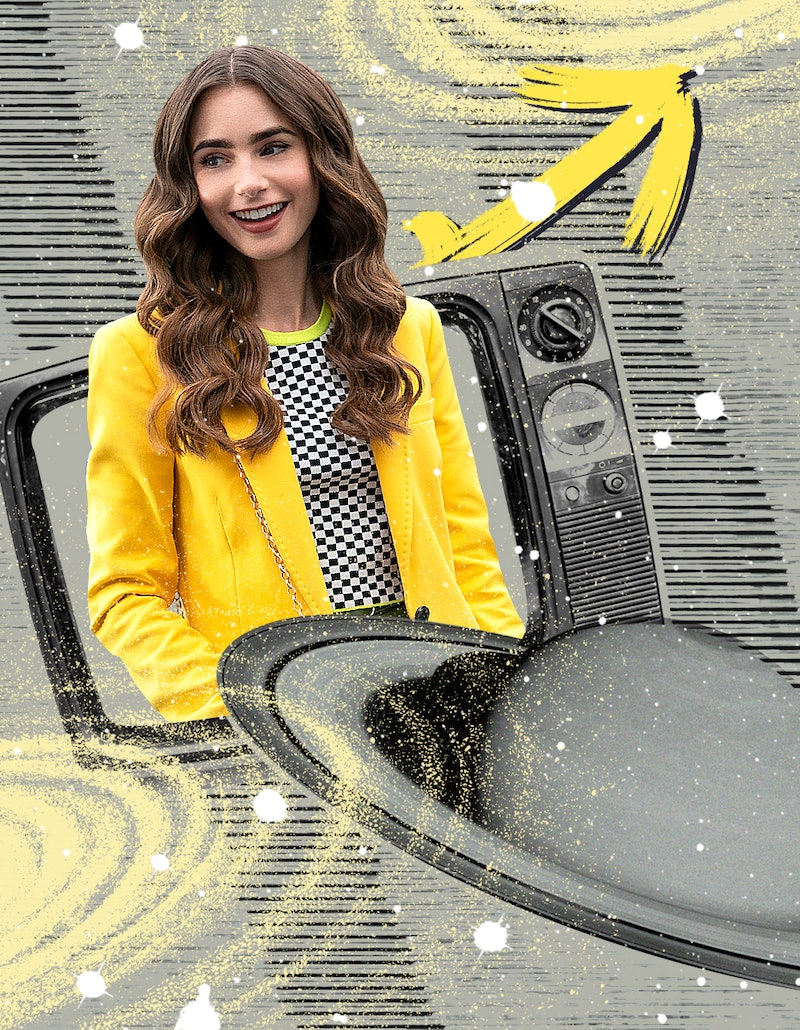 In Astrologically Speaking, astrologers make their case for fictional characters’ zodiac signs, based on specific scenes, quotes, or fashion choices. Here, astrologer Alexandria Lettman explains why Emily from Emily In Paris simply has to be a Sagittarius.

When Netflix’s Emily In Paris first debuted in the fall of 2020, it instantly went viral for its unrealistic depiction of, well, what it actually takes to go viral. Still, in a year that deprived people of travel, watching Emily, played by Lily Collins, abandon her life in Chicago to move to Paris for work gave us the romance, cityscapes, and drama we’d been craving. With Season 2 of Emily In Paris debuting on Dec. 22, it’s the perfect time to revisit the clues from the first season about what Emily’s zodiac sign might be. As an astrologer, it only took me a few minutes into the first episode of Season 1 to be certain that Emily has freedom-seeking Sagittarius traits.

Sagittarians live for the thrill and never turn down an opportunity to go on an adventure. They are ruled by the lucky and future-oriented planet Jupiter, giving them a ‘say yes’ attitude, unwavering optimism, and expansive nature. Sagittarius is a mutable fire sign, giving people with this placement a passionate and adaptable persona. That’s why, given her unwavering determination, flexibility, and optimism, I’m certain that Emily is a Sagittarius.

In Episode 1, we see Emily agree to relocate, lured by a tantalizing promotion and the opportunity to live in Paris. Even when called out by her then-boyfriend, Doug, over the fact that she can’t speak French, she responds enthusiastically, “Fake it ‘till you make it.” It’s in a true Sagittarian fashion that Emily chased the dream before considering the finer details of how things would work out.

Sagittarius Suns are explorative by nature and are drawn to new experiences that teach them more about life. Their aspirations are so big, however, they eclipse reality. That’s why Sags will skip over any planning and jump straight into the action. Whether it’s volunteering to babysit actor Brooklyn Clark and her very expensive watch in Episode 7, or agreeing to stand in as a model at a charity auction in Episode 9, Emily continuously proves that she’s always up for new and exciting life experiences.

2. Emily Is An Impulsive Leader

As a Sagittarius, Emily is ruled by the element of fire, making her an exuberant leader with an ‘act now, think later’ mindset. Sagittarians use their passion-fueled visions of the future to motivate and inspire others. But they can fail to differentiate between when it’s time to speak and lead, and when they should listen and follow.

For example, being brand new to the French division of Savoir didn’t stop Emily from attempting to change the marketing firm’s rules. In Episode 3, she hands out a list of corporate commandments from her Chicago office to her Parisian colleagues, including “Thou shalt always remain a positive attitude” and “Thou shalt avoid workplace romances.” Unsurprisingly, this overreach wasn’t received well. While her efforts to boost office morale and productivity were well-intended, her passion caused her to cross over into bossy and judgmental territory.

Emily over-stepped again when she gave her boss, Sylvie, credit for one of her own ideas in front of a client in Episode 4. This didn’t go smoothly; this gesture offended Sylvie, who didn’t want to be outshone in front of her client and lover, Antoine, whom Sylvie suspected was now pursuing Emily. Nevertheless, Emily saw her plan through by securing a deal between Antoine’s fragrance company, Maison Lavaux, and the Zimmer Hotels chain. This stopped Antoine from leaving Savoir as Sylvie had feared, and got her a commendation on a job well done. While Emily may step on toes trying to take control of things, her charm and quick thinking win everyone over in the end — a classic Sagittarian move.

Jupiter-ruled Sagittarians have a lucky nature that allows them to see solutions that others can’t. Accordingly, it’s hard to keep count of the number of times Emily pulls things together despite it looking like all hope is lost. In Episode 4, she gets invited to a grand art gallery opening, nails her elevator pitch for a new signature scent to hotelier Randy Zimmer, and convinces her friend Gabriel to host a dinner in which she secures a sweet deal for her marketing firm — all in a matter of two days.

Nevertheless, Sagittarians can get ahead of themselves and wind up over-promising and underdelivering. We see this in Episode 5 when Emily promises a new client, Hästens, the Swedish maker of luxury beds, that she can plan a viral campaign where their beds are situated in the most Instagrammable spots in Paris (think: the Louvre). This is a promise that she doesn’t end up fulfilling.

Later, in Episode 10, we see Emily agree to find a new location for Pierre Cadault’s fashion show in a single day (yes, during Paris Fashion Week). Her boss, Sylvie, asks, “What’s your grand idea?” and she responds, “I haven’t thought of it yet.” Like a true Sagittarius, Emily is flexible and has naturally attractive energy. She’s able to go with the flow of life and manifest the outcomes that she desires, leading things to work out in her favor more often than not.

Emily perfectly embodies Sagittarian energy. Not everyone can relocate to a new city where they don’t speak the language, go through a breakup, and deal with an unwelcoming boss without losing their faith in following their dreams as she can. Despite the bumps along the way, Emily never fails to turn the odds in her favor and win over her Parisian co-workers.

More like this
Andie From 'How To Lose A Guy In 10 Days' Is A Total Gemini
By Nina Kahn
These 3 Signs Are The Master Chefs Of The Zodiac
By Kristine Fellizar
These 4 Zodiac Signs Make The Best Bridesmaids
By Nina Kahn
These 3 Zodiac Signs Could Write A Bestselling Novel
By Brittany Beringer
Get Even More From Bustle — Sign Up For The Newsletter
From hair trends to relationship advice, our daily newsletter has everything you need to sound like a person who’s on TikTok, even if you aren’t.