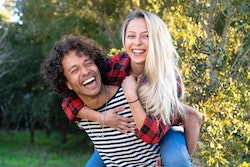 Two Geminis in a relationship together — what could possibly go wrong? The zodiac’s twins have a very interesting reputation. On the one hand, it’s hard not to fall in love with them. They’re known for being social, flirtatious, witty, and fun. But on the other hand, they’re also seen as the zodiac’s biggest players, manipulators, and drama-lovers. Because of this, it’s easy to assume that two Geminis in a relationship mean nothing but trouble. However, that’s not necessarily the case. Gemini and Gemini’s zodiac compatibility explains how this duo make a surprisingly decent pair.

“Some astrologers believe that partnerships or relationships between same Sun sign couples involve too much of the same energy. Thus the relationship can become boring,” Leslie Hale, an astrologer with Keen.com, tells Bustle. “Long-term compatibility is determined by all of the other factors in the chart, such as connections with the Moon, Venus, and Mars. That said, there are same sign couples who can make a relationship work.”

When two Geminis get together, there’s bound to be a lot of stimulating conversation, flirting, laughing, and social activity. While Gemini may come across as shifty or flighty to some, Hale says this won’t be a real issue between the two. They’ll naturally understand how the other works and will be tuned in to the same things. These two will be friends above anything else.

Sexually, a pair of Geminis will have a love of fun together. Before they even get to the bedroom, this pair of air signs will enjoy teasing each other through steamy texts, flirtatious mind games, and dirty talk. They’ll keep it lighthearted and will enjoy trying new things in bed. They’ll never have to worry about getting bored.

“Ruled by Mercury, Geminis are the gems of communication, expression, and reason,” astrologer Simone Pinkhasova tells Bustle. “They’re intellectuals who stoke the fervent fires of the imagination, mentally stimulating their partner and ingeniously communicating their desires in the bedroom.”

Geminis are known for their intellect, not their emotional depth. Even when Gemini is in love, their feelings tend to stay at the surface level until they become curious to explore those feelings further. According to Hale, “Their detached nature can keep this pair from developing a deeper bond or solid commitment.”

Additionally, Geminis are known for their duality. “Despite being in touch with their feelings, their emotions can shapeshift by the second,” Pinkhasova says. The twins tend to follow whatever interests them at the moment. It’s why they have a reputation for being here one day and gone the next. If someone stops being interesting, they have no problem moving on. But with two Geminis, this shouldn’t be too much of an issue since Geminis have different sides to them. They’ll always keep their partner on their toes.

When Gemini and Gemini first meet, they’ll feel an instant spark towards each other. According to astrologer Virginia Castiglione, they’ll have interesting conversations, will share a lot of laughs, and will enjoy having a battle of wits. It’s a lot of fun and they’ll appreciate the lack of pressure to define a relationship or have a serious talk about where things are going. Two Geminis in the dating stage are very go-with-the-flow.

Forming a lasting partnership, however, is where it gets more challenging as Geminis tend to get bored easily. Fortunately, Geminis are fun-loving signs who aren’t boring themselves. “They’re constantly changing, evolving, and switching it up,” Castiglione says. “If they can somehow decide they won't get bored of each other and that they’ll try to make it work, they can make a beautiful couple.”

The friendship compatibility between two Geminis is “super high,” says Castiglion. In fact, it’s even higher than their romantic compatibility since they don’t have to be each other’s one and and only friend. They’re both very social and open to meeting new people, so they’ll happily expand their friend group without either one getting possessive as some other signs might do.

A Gemini-Gemini friendship can also be full of inspiration and creativity, where there’s never a dull moment between them. As Tenae Stewart, astrologer and author of The Modern Witch's Guide to Natural Magick, tells Bustle, “They inspire and invigorate one another to try new things and share their ideas freely.”

However, it’s important for these two to create a space where each can feel seen and heard by the other. According to Stewart, Geminis have a tendency to talk over each other, always wanting the last word. “Conscious listening and actively working on their communication will help two Geminis in relationship to maintain a strong and lasting bond,” she says.

While many Geminis can form a friendship that lasts a lifetime, some may not. Given their nature, two Geminis can also be the type of friends who are inseparable for a summer and then lose touch once the season ends.

“Think of this like friends you meet while traveling,” Stewart says. “Those relationships are forged in incredible experiences, but don't always last when the trip is over and that's OK! It doesn't diminish the magic they made while together.”

As two Mercury-ruled air signs, communication should come fairly easy to Geminis. If they’re just having a conversation about something new they learned or they’re gossiping about one of their neighbors, there aren’t any issues. These two can talk about anything and everything for hours on end as long as the topic of conversation is something light or surface level.

However, communication isn’t as smooth sailing when it comes to fights or deeper relationship issues that need to be discussed. As Castiglione says, “They can both be overly logical and mental, giving little space to their emotions. That's a problem, and they may both be blind to this fact, which only complicates things.”

When two Geminis fight, it sometimes feel like a high school debate club. It can feel very detached, and both partners may leave the argument feeling unsatisfied as if nothing really got solved. If they don’t open up to each other about their feelings, there’s a good chance their relationship may not last.

Potential Problems In A Gemini-Gemini Relationship

The biggest issue in a double-Gemini partnership would be their ability to commit. Geminis are known for being inconsistent. Date plans can fall through, and committing to an actual relationship could take forever. “Gemini has a way of looking at things from all angles,” Hale says. “If both individuals are looking at a commitment from this angle, looking at all angles continually, it might never happen.”

There’s also the issue of trust. Geminis are notoriously flirty, and tend to believe that they know how people work analytically. They aren’t possessive, but they do know that people don’t always have the best intentions. If they see their partner flirting and hitting it off with other people, they may have trouble trusting that their partner will stay faithful.

Are Gemini & Gemini A Good Match?

Overall, two Geminis in a relationship make a decent zodiac couple. According to Pinkhasova, they match each other’s intelligence, a flair for social events, and independence. They make a fun couple. However, they will have to work on their emotional bond.

“Gemini’s symbol as the twins symbolizes their dualistic nature, so two Geminis in one bed may be too big of a party to last for long,” she says. “Romance, passion, and play are all there; however, this duo will have to learn to commit and trust each other to sustain a partnership.”

Tenae Stewart, astrologer and author of The Modern Witch's Guide to Natural Magick

This article was originally published on April 2, 2021