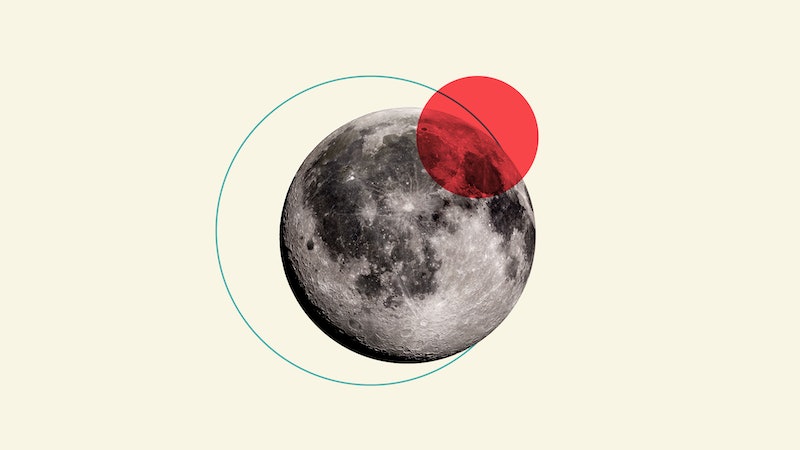 It’s a new year, but between Mars and Mercury retrograde mixing up your signals and slowing down your flow, it may not have truly felt like it. However, those retrogrades are behind you now, and the first new moon of 2023 promises to usher in some fresh vibes that bring all zodiac signs the bright new beginning they’ve been waiting for. Rising on Jan. 21 in the free-thinking sign of Aquarius, the January 2023 new moon is here to inspire you to start charging toward your future goals — even if they’re a little unconventional.

New moons are the monthly kick-off to each fresh lunar cycle, so astrologically, they’re usually considered an auspicious time for starting new things and planting seeds for future projects. That’s why many people find it helpful to focus on their goals or plan manifestation rituals under this renewal-focused moon phase. January’s new moon happens to be the first one of the year, so it’s supercharged with fresh-start energy that’s ripe for setting personal intentions. And because this lunation takes place in avant-garde air sign Aquarius, the spiritual meaning of the January 2023 new moon is all about letting your uniqueness shine and blasting off into a future that aligns with your most authentic self.

This refreshing lunar moment is offering all zodiac signs an opportunity to break free of old beliefs and embrace a more innovative and forward-thinking mindset. If you want to make the most of the January new moon’s spiritual energy, it’ll be helpful to first understand its mystical meaning.

With the sun and moon joining forces in maverick Aquarius territory — just one day after Aquarius season 2023 begins — January’s new moon is about eschewing the status quo and rewriting life’s rulebook as you embark on a new year. Aquarius zodiac energy is quirky, rebellious, and unconventional, so now’s a time to let your freak flags fly and think beyond society’s expectations as you craft your ideal future. This lunation can also push you to get more involved in community action or humanitarian efforts, as Aquarius’ collectivist vibe invites you to take a break from your emotional dramas, think more objectively, and embrace the revolutionary power of teamwork.

At the time of the new moon, the luminaries will be aligned with power-hungry Pluto, making it an important time to dive into shadow work and start digging through the hidden desires buried beneath the surface of your life. Helpful lunar connections to action-oriented Mars and expansive planet Jupiter give your goals some serious gusto now, too — so allow this auspicious and motivating energy to inspire you to follow your heart and march to the beat of your own drum. Sometimes you have to go against the grain and dare to be different in order to honor your inner truth, and that’s what this new moon’s spiritual meaning is all about.

Additionally, the sun and moon are joined in Aquarius by love planet Venus and responsibility-focused Saturn, which are forming a conjunction aspect to one another at the time of this lunation, further amplifying the Aquarian energy. With this cosmic influence at play, you may find yourself taking on greater commitments in romance or moving into a more serious relationship stage with a partner. It’ll also help to ground you in your values and stay true to your weird and wonderful self — making it even easier to honor the spiritual meaning of the new moon.

How To Work With The January 2023 New Moon’s Energy

Thanks to both Mars and Mercury retrograding recently and dampening motivation levels for the first couple weeks of January, setting New Year’s resolutions earlier this month may have felt like a bust. However, the new moon is here to save the day and give all zodiac signs an opportunity to set intentions for the year to come. Consider this lunation a reprise to any New Year’s rituals or manifestations — it’s a time to work with your favorite method of manifesting or do a mystical moon spell that can blast your wishes into the ether. Stop worrying about what other people think and start breaking out of any self-imposed chains that have held you back from being your one-of-a-kind self.

In addition to being the first new moon of the year, this lunation also aligns with the beginning of Aquarius season and the end of retrograde season — as the sun enters Aquarius the day before the new moon, while Uranus retrograde ends the day after, heralding in the only period of the year during which no major planets will be backspinning. That said, this action-packed new moon weekend brings a refreshing change of pace overall, so it’s an important time for all zodiac signs to breathe in the fresh vibes and exhale all the setbacks and struggles of the past few months. Plus, with the sun and moon having just aligned with transformational Pluto, the spiritual meaning of this new moon wants you to clean out your cosmic closets from the inside out, paving the way for revolutionary new adventures.