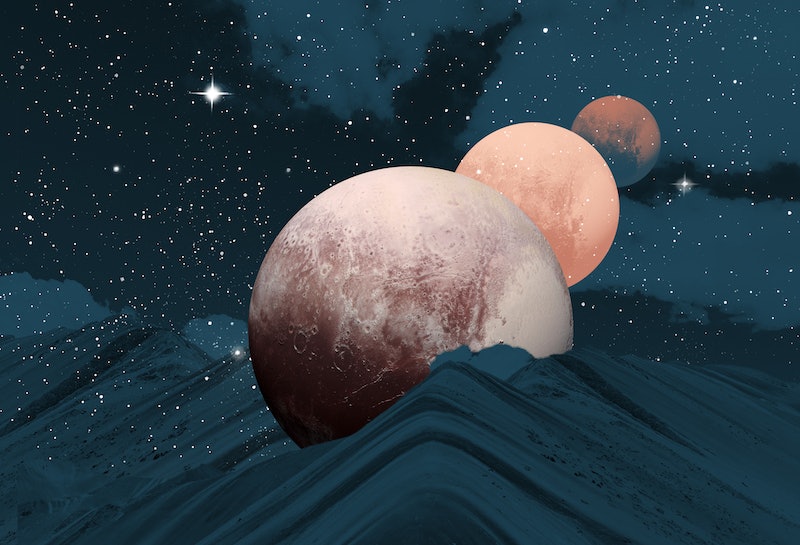 Happy new year, star babes! There are all kinds of dazzling new beginnings on the cosmic horizon as we look over the astrology of 2023, and some of the planetary activity in January will help to set the stage for all the magic that’s to come. We’re off to a slower-than-usual start, thanks to both Mars and Mercury in retrograde until mid-January — but by the end of the month, all zodiac signs will be in a better groove and ready to slay their New Year’s goals. Get your shiny new datebooks ready, because you’ll want to make a note of all the major astrological events in January.

The year always begins with the sun in earth sign Capricorn, which gives us the drive and discipline we need to set realistic New Years’ intentions and stick to ‘em. An emotional full moon on Jan. 6 puts our sensitivities on blast, but by the time the new moon on Jan. 21 rolls around, we’ll be ready to jump into some exciting new endeavors and embrace our wildest ideas. Throughout the middle of the month, we’ll see Mars, Mercury, and Uranus wrap up their retrogrades, promising more forward momentum, mental clarity, and motivation as we dive into the innovative and forward-thinking realm of Aquarius season. By the end of the month, it’ll feel like a cool cosmic breeze has blown through your life and refreshed your goals.

Read on for your January 2023 astrological forecast.

As we flip our calendars to 2023, we’ll have the sun, Mercury, Venus, and Pluto clustered together in Capricorn — making this a particularly powerful portion of Capricorn season. This influx of driven and hardworking earth sign energy puts our collective minds on money, material goals, and personal achievements. Capricorn zodiac qualities also beautifully support New Year’s rituals like setting intentions and planning ahead for the future, so embrace this down-to-business attitude as you approach the upcoming year.

However, it’ll behoove you to take things slowly, as the first two-and-a-half weeks of the month also comprise the bulk of the current Mercury retrograde in Capricorn. Instead of charging full-steam-ahead on your 2023 goals, use this time to tie up loose ends and work out the kinks in your long-term plans. This may be a little frustrating for those of us who like to kick off a new calendar year by implementing a million new habits at once, but it’s worthing waiting until the time (and your motivation levels) are right. Strategic Capricorn energy can help us embrace the power of patience.

Come Jan. 2, we’ll have a major vibe switch in the romance department, as relationship planet Venus enters Aquarius. This air sign is rebellious, objective, and a little bit aloof, so it’s definitely a time to play it cool on the dating scene and go against the grain a bit when it comes to your love life. We may find ourselves drawn to unusual aesthetics and unconventional situationships, so let your freak flag fly and try something out-of-the-box. This transit also gives us a little taste of the Aquarius zodiac energy that’s coming our way later in the month, once Aquarius season begins.

The First Full Moon Of The Year

A full moon is rising on Jan. 6 in the caring and compassionate sign of Cancer, marking the first major lunation of the year and bringing our feelings to a boiling point. With this sentimental water sign’s energy at the helm, all zodiac signs will feel extra sensitive and easily triggered, so beware of emotional misunderstandings or touchy conversations. However, if you tread lightly and treat people with tenderness, it’ll be easier to get in tune with this full moon’s mystical revelations and illuminations.

Retrogrades Come To An End

Get ready for a major cosmic energy boost, because January brings the end of three planetary retrogrades. First up is Mars retrograde, which is finally coming to an end on Jan. 12 and giving us our collective mojo back. This long and exhausting backspin for the action planet began back on Oct. 30 and has been a relatively unproductive and unmotivated period for many of us. Come mid-January, we’ll likely feel ready to start jumping into things with more zeal and passion. Thankfully, Mars retrogrades less often than any other planet, so we won’t have to deal with this particular backspin again for nearly two years.

Less than a week later, on Jan. 18, mental planet Mercury will end its retrograde, too — and 2023 will truly begin to feel like the new beginning you’ve been hoping for. Kicking off a new year with Mercury retrograde can feel like a bummer for those of us who like to immediately turn over a new leaf come Jan. 1. But with the communication planet moving forward again, we can finally start executing our plans and planting seeds for our future endeavors.

Just a few days later, on Jan. 22, electric planet Uranus wraps up its annual retrograde after five months of moonwalking. As this wild-child planet stations direct, the collective is being ushered into a period of change, innovation, and advancement — so keep an open mind and allow your creativity to soar.

On Jan. 20, the sun will enter cool and collectivist Aquarius, joining both love planet Venus and responsible planet Saturn in the realm of the water bearer, and officially ringing in Aquarius season 2023. This solar ingress will feel like a cosmic breath of fresh air for all zodiac signs, as it encourages us to think bigger and embrace our most futuristic and innovative ideas. It also highlights the importance of community. Make some social plans to jive with the Aquarius vibe!

Aquarius season is getting an especially exciting welcome, as the year’s first new moon rises on Jan. 21. With Mars and Mercury having already stationed direct, this lunation will feel like the real start of the new year, and it’ll offer an inspired burst of momentum and personal empowerment. This is a wonderful time to march to the beat of your own drum and break out of your comfort zone. Embrace all the things that make you unique.

We’re wrapping up the month on an ultra dreamy note, as love planet Venus enters sensitive water sign Pisces on Jan. 26. This transit will coax the hopeless romantic out of every zodiac sign— just in time to get us into the Valentine’s Day spirit. Through the last week of January and into February, Venus in Pisces is giving us rose-colored glasses and encouraging us to find the beauty in just about everything, so it’s a great time to bring some added softness and idealism into your current relationships.