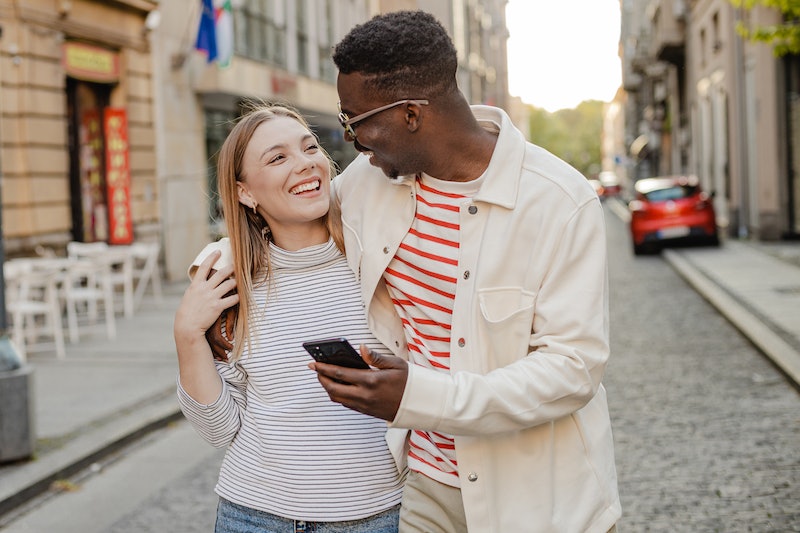 Libra and Aquarius are two signs that will become friends right away. Together they’ll share interesting conversations, lots of laughter, and some really good times in the bedroom. However, romantic Libra is the sign of partnerships, while Aquarius tends to enjoy flying solo. Although they have a lot going for them, their needs in a relationship can sometimes feel too different to make a relationship work but Libra and Aquarius’ compatibility shows why this pair of air signs can be a surprisingly good match.

“Libra and Aquarius are both air signs, presiding over all matters of the mind and intellect,” astrologer Abigail Nora tells Bustle. “This can make for a particularly cerebral match. They might be a slow burn or a slow start in other areas, but mentally and intellectually, these two will click almost immediately. They may also bond over a shared passion for justice — just look at the famous Libra-Aquarius couple, John Lennon and Yoko Ono.”

These two tend to get along well because they have so much in common. However, since they're both air signs, going deep emotionally isn't something they like to do. According to Nora, both Libra and Aquarius may try to “intellectualize away their feelings” instead of just allowing themselves to actually feel them. Because of this, it may take some time for these two to open up to each other emotionally.

“Underneath that detached veneer, however, Aquarius feels things deeply and partnership is important to Libra,” Nora says. “Libra might be patient and understanding enough to crack Aquarius's cool exterior and forge a lasting emotional bond.”

Libra and Aquarius form a trine aspect in astrology, aka a 120-degree angle. According to Stina Garbis, a professional astrologer and psychic, this means they’re very compatible in multiple ways.

Sexually, this is an excellent match as both signs need intellectual stimulation and open communication in their relationships. For them, physical intimacy is more than physical. In bed, Aquarius likes to explore, while Libra likes to please and be pleased. “This couple could start off their sexual relationship by sexting, using it as foreplay and then taking the dirty talk to bed,” Garbis says. “Words and fantasies get them off, and Libra loves to text.” When these two are in sync, which tends to be more often than not, they can bring out the best in each other.

Both Libra and Aquarius can seem emotionally detached in relationships. While the Venus-ruled Libra likes romance and affection, they’re not the type of sign to openly express their feelings out loud. Libras are all about balance and harmony, so they’re very cautious about not wanting to rock the boat in any way. Even if Libra is upset about something, they may choose to keep it inside to keep the peace in a relationship.

Aquarius, on the other hand, is very logical. Love and other complicated emotions are hard for them to deal with because they struggle to put words to their emotions. If they start having feelings for someone, it will take a while for them to admit to themselves that they’re actually in love. Because of that, they’re not very openly affectionate. Libra, who likes to go deep right from the very start, may mistake Aquarius’ aloofness for lack of interest and decide to move on.

“They may talk for hours about their differences and not find a solution, or talk through a solution from different angles,” Garbis says. “Aquarius is a hard sign to fight because they always have a dramatically different viewpoint than most, and may sometimes be hard to understand. Libra, on the other hand, likes to debate and argue like a lawyer.”

One partner needs to be the grounding force in the relationship or else nothing will get done. On the flip side, their arguments can help keep their relationship exciting. According to Garbis, if things get boring for either of these signs, they have no problem throwing in the towel and ending things right there.

Libra and Aquarius have a lot going for them in terms of dating compatibility. As Desiree Roby Antila, author of Sun Signs in Love, tells Bustle, the trine these signs form is considered to be “heavenly and harmonious.” Libra will be drawn to Aquarius’ intelligence and spontaneity, while Aquarius will be attracted to Libra’s effortless charm.

“There is nothing dull about this match, and odds are even the way they meet will be an unexpected story,” Antila says. “Their complementary energy brings zeal to their love and lives. They never know what to expect next with each other, making every day different than the one before which is exactly how they like it.”

One thing that gets in the way of their harmony is Aquarius’ “unruly” Uranian energy. According to Antila, the highly independent Aquarius tends to change their mind about where they should be in their relationship. One week they’re all in, and the next, they’re off doing their own thing as if they aren’t in a relationship. This can be confusing for Libra, who’s very partnership-oriented.

Fortunately, Libra is known for being indecisive, so they have a level of understanding that others don’t. This will allow Aquarius to have the space they need to figure things out.

“Aquarius loves Libra’s fair mind and beautifully-dimpled smile that heals their aloof heart, and Libra knows that no one on earth would ever be able to love them for all their faults the way that Aquarius does,” Antila says. “There is rarely a dull moment around these two.”

When it comes to friendship, Libra and Aquarius’ compatibility is high. They’re both very friendly signs who would rather play nice to keep the peace than antagonize others. Aquarius also values friendship above all other types of relationships, and are very loyal to those they let into their inner circle. Libras are the same.

“They are both amicable people, willing to support and lend an ear or a hand and help each other figure out their problems,” Garbis says. “However, this may not be the type of friendship where they’re calling each other every day, as both signs also like to have their space.”

In general, Libra and Aquarius have a lot going for them as a couple. However, this is a partnership that isn’t the most stable. Since they’re both air signs, nothing is grounding them. “They can get carried away in an intellectual companionship, but Aquarius might neglect the romance that Libra, who’s ruled by Venus, craves,” Garbis says. With double the amount of air energy, these two may get into battles over who is more original, creative, or intellectual. There may be a lot of butting heads over who’s right and who’s wrong.

Another source of tension is the differences in their approach to relationships. Libra is the sign of partnerships, while Aquarius is known for being a freedom-loving sign. According to Garbis, these two will likely spend less time with each other than the typical couple, which won’t please Libra. “Even though Aquarius secretly craves a stable social connection, they need their space to feel that they are a separate person from their partner,” she says. “They want that of Libra, too. They don’t want Libra all over them. They want their partner to have a life too as it keeps things interesting.” If these two can’t find a way to compromise, the relationship might not last.

Are Libra & Aquarius A Good Match?

Despite the potential problem areas, these two make a good match. According to Garbis, their relationship will be like an extension of their conversations — natural, easy, and full of exploration. “With time, this relationship can be more than a beautiful companionship,” she says. “They can even form an excellent business partnership where they create something new to change the world.”

More like this
The 3 Zodiac Signs Most Likely To Get Married Later In Life
By Kristine Fellizar
4 Zodiac Signs That Will Take Forever To Admit They Like You
By Kristine Fellizar
TikTok's "Triangle Method" Technique Is The Key To Better Flirting
By Carolyn Steber
17 Valentine's Day Tips For New Couples, Straight From Relationship Experts
By Carolyn Steber
Get Even More From Bustle — Sign Up For The Newsletter
From hair trends to relationship advice, our daily newsletter has everything you need to sound like a person who’s on TikTok, even if you aren’t.