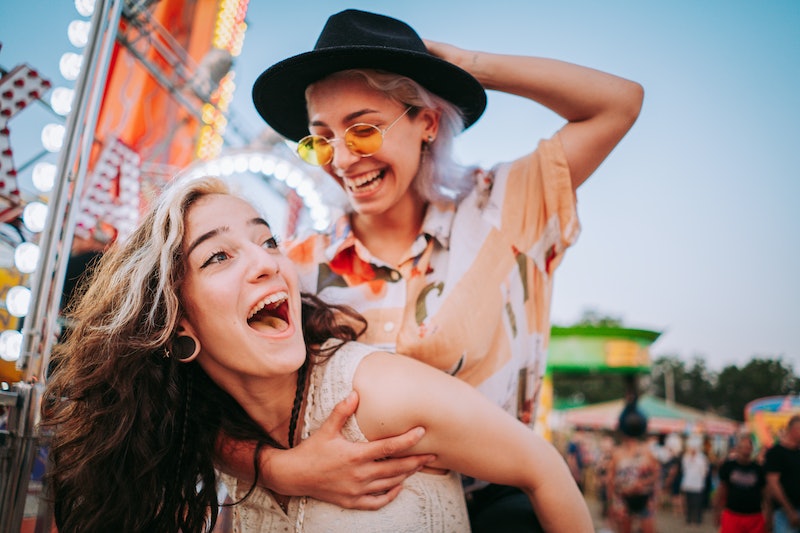 Dating someone of the same zodiac sign comes with its share of pros and cons. On one hand, you’re with someone who just gets you. On the other hand, you’re with someone who shares both your best and worst traits. When two Sagittarius signs get together, it’s a relationship between two fun-loving signs who enjoy doing their own thing and hate being tied down. So what does that mean for their long-term potential? Sagittarius and Sagittarius’ compatibility shows why this fiery, fun-loving couple may be better off as friends.

When two Sagittarians first meet, it’ll probably be at a well-attended party or event. They’ll be drawn towards each other because they’ll be the ones in the middle of the dance floor competing to see who’s got the better moves. As astrologer Clarisse Monahan tells Bustle, their first meeting will be more fun than romantic. “These ardent adventurers can usually concoct some outlandish schemes together, and with lucky Jupiter as their ruling planet, there’s a feeling like anything is possible between them,” she says. “A natural rapport does come easily.”

If these two are on the same wavelength, they could be the most happy-go-lucky couple in the zodiac. According to Stina Garbis, professional astrologer and psychic, “This couple would share much laughter and joy and enjoy each other’s company, instead of worrying about the world. They would also throw great parties.”

The archer is known for being adventurous, so naturally, they’re up for anything when it comes to sex. According to Garbis, two Sagittarius signs would enjoy a really healthy sex life. “It’s always a surprise to see them outside of the bedroom, and things would never get boring,” she says. “Lots of quickies for this couple; in the car, in the closet, at the office, at the movies — you name it, they’ve done it.”

Like their fellow fire signs Aries and Leo, Sagittarius is a very energetic and physically active sign. According to Jill Loftis, an astrologer with Nuit Astrology, two Sagittarians will deepen their bond through physical activities like hiking, playing competitive sports with each other, and sex.

“Both will love the uninhibited exploration of pleasures al fresco — Sagittarians typically love sex out in nature,” Loftis says. “This combination allows their spontaneous streak to be met in a way that other relationships couldn’t handle. This fire sign combination of freedom and excitement can lead to a rapid evolution in their relationship, which can also become a somewhat reckless convergence of souls.”

In general, Sagittarius doesn’t get too emotional. If something doesn’t go their way, they’ll be bummed for a moment and then brush it off. Fire signs typically have a keep-moving-forward mentality. So these two won’t have to deal with huge emotional outbursts or moodiness. Sagittarians are very honest and straightforward. If there’s something wrong, they prefer talking things through.

Falling in love with each other will come easily for them. According to Garbis, “This couple’s communication style includes lots of laughter and joking, caring about nothing else besides the present. They could spend hours sharing funny stories.” However, they may run into problems when one partner wants to be serious while the other is still going with the flow.

“If one or both partners become selfish, things could go awry for this playful couple and they may try to battle over who’s right,” Garbis says. “If either takes themselves or the relationship too seriously, and their head gets too big, then they’ll be brought down a notch by their carefree partner.”

When it comes to dating, Sagittarius and Sagittarius’ compatibility can be pretty high. “These two are both so fiery, both incredibly independent, and both always on a journey with no destination necessarily in sight,” Desiree Roby Antila, astrologer and author of Sun Signs in Love, tells Bustle, “If they happen to cross paths and decide to start traveling down the same road together, it is really something quite rare and spectacular.” As long as they’re on the same page about their relationship and make time for each other, they’ll have a “life full of color” filled with adventure, laughter, and fun.

Two Sagittarians as friends make an excellent match as they have so much in common. In fact, Antila says, they’re so similar, they’ll “vibrate” on the same wavelength with ease. “There is much affection and expressive love that brings a sense of safety and security that all archers secretly long for,” she says. “This also makes them best friends in many ways.” These two have a great sense of humor and always have a joke or crazy story to tell. There’s just never a dull moment between these two.

Sagittarius is a mutable sign, which means they’re very go-with-the-flow and are experts when it comes to language, communication, jokes, and word games. According to Antila, this makes their communication a lot of fun and filled with hilarious banter. They prefer to keep their conversations light and may crack a joke if things get too heavy.

They’re also very direct to the point of being brutally honest, which can cause some tension from time to time. “When emotions are high, they are not the best at fixing things verbally, so it is usually best to just take some time apart to let things cool down before coming back together,” Antila says.

The archer is one of the most independent signs in the zodiac. They value their freedom above anything else, so it can take some time for them to warm up to the idea of making a commitment. The last thing they want is to be with a partner who nags them every day about what they’re doing, who they’re with, or why they aren’t spending enough time together. Fortunately, they won’t have to deal with a ton of those kinds of questions when they’re with another Sagittarius.

However, it’s important for two Sagittarians to invest an equal amount of time and energy into their relationship. “Sagittarius is the happy-go-lucky traveler of the Zodiac, always on the hunt for the next adventure,” Monahan says. “With two together, they can each get distracted and veer off on their own individual quests, shooting their arrows in different directions.” They may find themselves growing apart as time goes on.

Two Sagittarius signs in a relationship don’t make a bad match. They’re very similar in a lot of ways and will have a lot of fun together. But since the archer isn’t a very romantic sign, there is the possibility that the spark may fade over time. According to Monahan, they may be better off as friends in the long run. However, if they do want to make it work, they need to put in the effort to create a life together.

More like this
The 3 Zodiac Signs Most Likely To Get Married Later In Life
By Kristine Fellizar
4 Zodiac Signs That Will Take Forever To Admit They Like You
By Kristine Fellizar
18 Hinge Prompt Answers To Try If You’re Looking For Something Casual
By Lexi Inks
TikTok's "Triangle Method" Technique Is The Key To Better Flirting
By Carolyn Steber
Get Even More From Bustle — Sign Up For The Newsletter
From hair trends to relationship advice, our daily newsletter has everything you need to sound like a person who’s on TikTok, even if you aren’t.

This article was originally published on Dec. 2, 2021