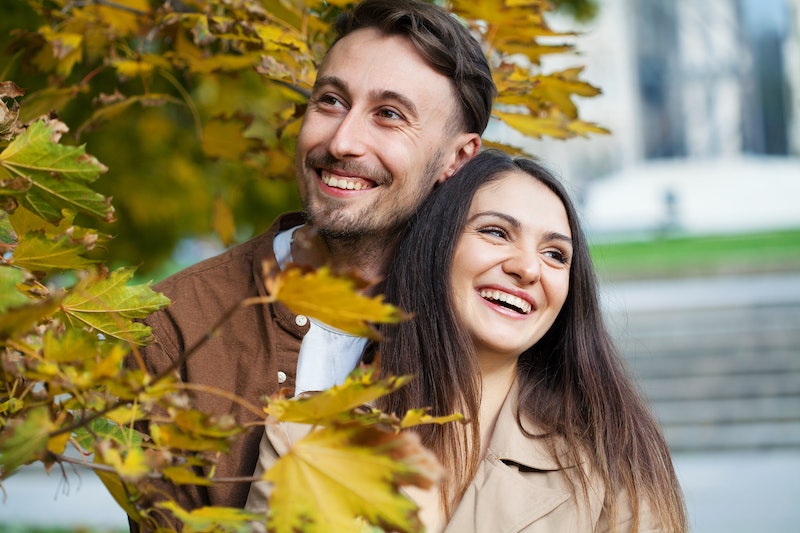 A Scorpio-Capricorn love story will likely get off to a slow start. Both signs value security in relationships and are known for having trust issues, so opening up will take a bit of time. But once they’re finally in sync, they have the potential to be the zodiac’s ultimate power couple. Scorpio and Capricorn’s zodiac compatibility has everything you need to know about this Water and Earth sign pair.

As astrologer Lisa Kiss tells Bustle, Scorpio and Capricorn can make a very compatible couple. “Both signs are great in business, so this would make an amazing business partnership, or [they] could even start a business together,” she says. “They have an immense drive and can focus on their goals to manifest their dreams. Both signs also seek deep security, which can be directly tied to how safe they feel. They have the ability to work together and create safety together.”

However, Scorpio and Capricorn are two of the most serious signs in the zodiac, which can make for a rocky beginning. According to Stina Garbis, professional astrologer and psychic, Capricorn gets their restrictive nature from their ruling planet Saturn, while Scorpio gets their intense energy from Pluto.

“This isn’t a relationship where everything is cheery and happy all the time,” Garbis says. “This is a relationship that may be filled with power struggles, intense love, sexual hangups with happy releases, and awful arguments with powerful makeups.” While that may seem very unstable for a lot of other zodiac combinations, this is a dynamic that can work for the two of them.

Earth and water are compatible elements, so sexually, this is a pair that can get along really well together in bed. According to Kiss, Capricorns are great leaders and would initiate new things that Scorpios would love.

However, it may take some time for them to get to a place where they’re comfortable enough to open up about their sexual desires. According to Garbis, both Scorpio and Capricorn tend to have inhibitions around sex. Earthy Capricorn, in particular, may be intimidated by the Scorpio’s intensity, and the scorpion will only open up once they feel like they can trust their partner. Chances are, Capricorn will need to reveal what they want sexually before Scorpio will be open about their fantasies.

“Once Capricorn's true sexual nature comes to the surface, they may prove to be a very loyal and giving partner,” Garbis says. “Capricorn is a strong sign and would be a fierce and invigorated lover for Scorpio, as opposed to one that’s soft, tender, and passive.”

This is an area of their relationship that may be a bit challenging. Capricorn is a practical Earth sign who doesn’t deal with emotions very well, while Scorpio is a highly sensitive and emotional Water sign who feels things very deeply. According to Kiss, they may not fully open up to each other until they’re both sure they can trust each other. Scorpio tends to be very private, and not knowing how their partner feels may trigger Capricorn’s insecurities.

“Once trust is established they should be able to openly share with each other knowing that they have created a safe space together,” Kiss says. When the relationship is good, Scorpio can help Capricorn be more in tune to their feelings, and Capricorn will help ground Scorpio whenever they’re in a mood. They can balance each other out nicely.

The Biggest Potential Problem Areas In A Scorpio-Capricorn Relationship

Communication may be an area of the relationship that needs work. “They [may] keep secrets from each other until they all come out during a heated argument,” Garbis says. “But then one partner will come to realize how their partner feels, and they’ll find a sense of togetherness and understanding.” Until they learn how to break the pattern, Scorpio and Capricorn maybe be stuck in a cycle of intense fighting and making up.

Trust issues are another thing they may have to overcome, especially early on. Both signs value security, so they want a relationship that lasts. However, they may give each other “tests” to make sure their partner is the right one. “This isn’t a couple who cries and pleads for attention,” Garbis says. “Instead, they may act out of anger or jealousy to show they love each other and that may seem endearing. For example, ‘Aww they are jealous, that must mean they love me.’” If they learn how to let down their walls and trust that their partner has nothing but good intentions, they wouldn’t have as many fights as they do.

Overall, the long-term potential between Scorpio and Capricorn is promising. However, they will have to put in some work to improve their communication habits. “If Capricorn is willing to attempt to express their feelings and form an emotional intimate bond with Scorpio, they can create a solid foundation of trust and security,” Kiss says.