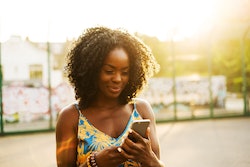 Hope you're ready for a little full moon fun, because the September 2020 full moon — also known as the corn moon — is taking place late on the night of September 1 (or technically the wee hours of the morning, if you're on eastern time), and it'll be putting on quite a show if you know where to look. And given that it's the last full moon of the summer, you won't want to miss it.

Astrologically speaking, this full moon will affect some zodiac signs pretty intensely, as it's currently in the emotional sign of Pisces which gets us more in touch with our feelings and intuitive senses. You'll feel the energy of this lunation whether you see it or not, but this is one full moon you'll want to feast your eyes upon — as it's going to peak during the darkest hours of the night, and will also appear a brilliant shade of peachy orange if you catch it at the right moment. Here's how to see the September 2020 full moon in all its glory.

September's corn moon will peak during prime moon-viewing hours at 10:22pm PT/1:22am ET — meaning it'll be at maximum brightness while the night sky is at its darkest, making for a dramatic and illuminating full moon showing. If you can, treat yourself to an extra afternoon latte so you can stay up a little later to catch the lunar show, as it's bound to be big, bright, and beautiful.

If burning the midnight oil is a no-go tonight, you can still witness some mystical moon magic just after the sun sets, as the corn moon rises over the eastern horizon — as this is the time when you're apparently more likely to see it appear in a pretty shade of peach instead of its usual white or yellow color (you can also see this happen on the western horizon just before sunrise on the morning of September 2).

Remember, even if you're one of the zodiac signs least affected by the September full moon, this month's big luminary is more than just a spectacular sight to see — it's also a chance to cosmically get in touch with your feelings as you round out the summer season. Keep in mind the do's and don'ts of the September 2020 full moon as you sky-gaze so you can make the most of tonight's astrological energy, too.