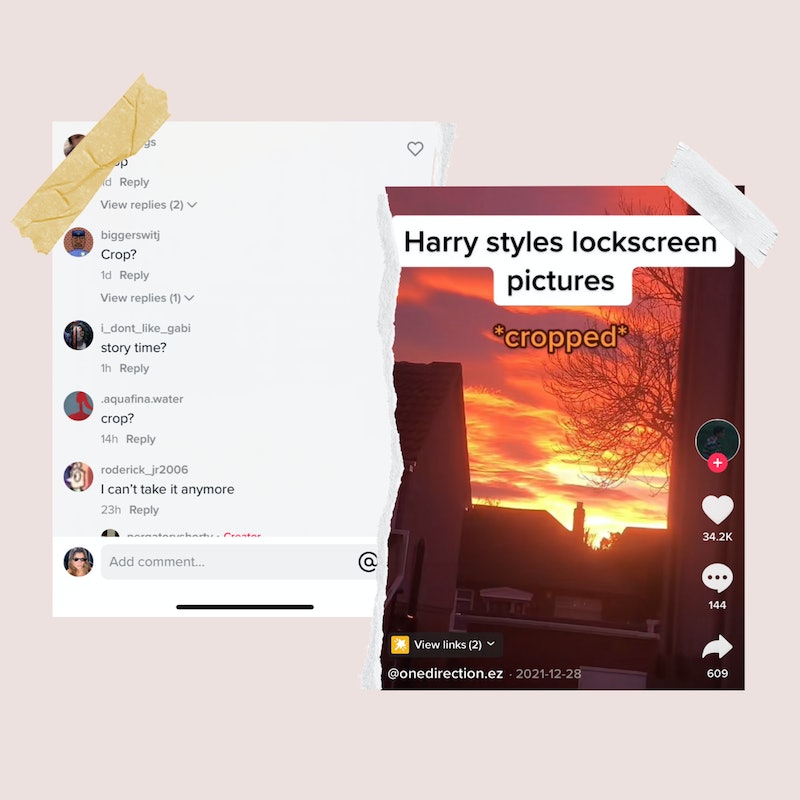 If you’re one of the brave millennials or Gen Z cusps to download TikTok, you’ve probably had moments when you’ve felt like you should’ve downloaded a language-learning app in the process. Words you thought you knew inside and out like “cringe,” “elite,” and “feral” suddenly have a new meaning, and cryptic emoji combinations like 🚫🧢 and 🅿️ fill comment sections with mystery. Just when you think you’ve finally become fluent in the new lingo, a wave of trolling TikTokers fills your feed with one simple word: “Crop?”

Even if you’re familiar with its original meaning on TikTok, you might be mystified by the new wave of “crop” comments overtaking TikTok. Like many trends on the app, the term is one that has lived many lives from its more literal origin to meme-ified iterations. But, before you go looking for some deeper ominous meaning in these comments, don’t make a mountain out of a mole hill. Or, better yet, don’t make a crop circle out of a crop comment. Unlike TikTok disses like “mid,” the meaning of “crop” comments is simply not that deep.

Here’s everything you need to know about what “crop” means on TikTok.

What Did “Crop” Originally Mean On TikTok?

Have you ever saved a TikTok to your phone, ready to rewatch and repost it to your heart’s desire, only to remember that the downloaded video is sullied by TikTok watermarks? Or, maybe you took a screen recording of a video you couldn’t save, but a crucial component of the video was blocked by the like and comment buttons on the right side of the screen? Well, then you’ve already discovered the original reason behind the “crop” comments.

Necessity breeds invention, and if there’s one thing true about TikTokers, it’s that they’re always willing to get creative when problem solving. As TikTokers struggled with their inability to save videos — especially fan cams and photos of their favorite celebrities — without unwanted markings on the screen, many TikTokers began requesting that creators repost a cropped version of their video. In doing so, users can freely screen record the cropped version of the video or screenshot a still photo from the video to use as a phone background without any watermarks from the various buttons on one’s screen.

How Are People Using “Crop” As a Joke?

Nothing is immune from being turned into a meme on TikTok — and that includes making an overused comment into its own sarcastic trend. Since “crop?” comments have become so common on TikTok in a literal sense, now people are using the phrase to troll users in their comment section. “Story time?” is another frequent comment that stemmed from genuine interest in a video, and was used when viewers wanted a follow-up explanation of the story behind a certain video. Similar to the crop comments, “story time?” has now been meme-ified too.

If you have been confused by this trend, you’re not alone. Plenty of users have taken to TikTok to share that they too feel as though they’ve been left out of an inside joke. However, it appears that the joke truly is just poking fun at how frequently this phrase has been commented on the app, and is now yet another way TikTok comments are trolling users.