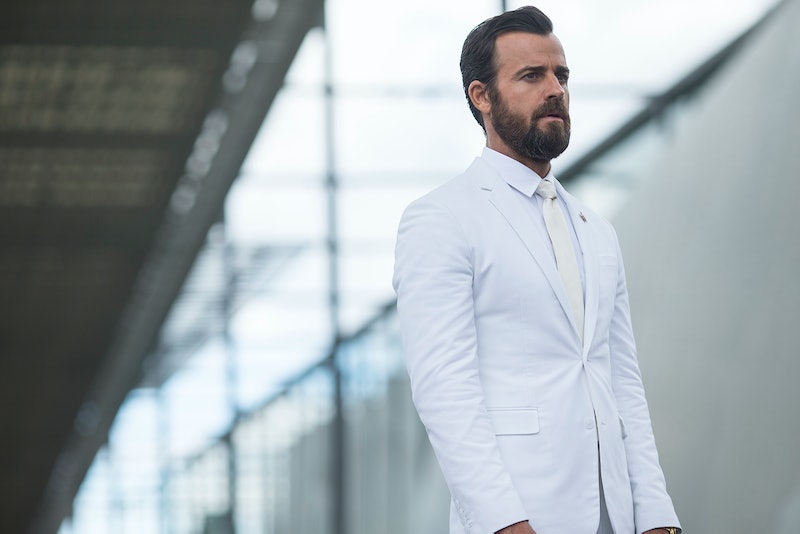 When this past Sunday's emotional series finale of The Leftovers aired, it surprised many fans by answering far more questions than expected. But just because the finale solved more mysteries than expected doesn't mean there aren't still some unanswered questions from The Leftovers finale that will linger in perpetuity, now that the HBO series has departed for good.

While some viewers were cautious about expecting answers given how Damon Lindelof's previous show (Lost) had ended — and while Lindelof and co-creator Tom Perrotta had all but promised there would never be a solution to the show's central mystery — the final episode revealed at least one possible theory about where the Departed went, courtesy of Nora's alleged trip through the LADR device.

And that unexpected revelation was just one of the many questions the Leftovers finale answered. The show's last hour also tied up such loose ends as Laurie's fate, the existence of that Season 3 premiere flashforward, and the resolution of Nora and Kevin's rocky relationship. The episode, "The Book Of Nora," somehow found time to address all of these dangling plot threads while simultaneously delivering a romantic, surprising, and cathartic conclusion to the story that's been unfurling for the past three seasons.

But here are the unanswered questions that still remains.

1. How Did Kevin Keep Coming Back To Life?

According to Lindelof and Perrotta, all of the show's more fantastical elements can either be viewed as supernatural, or can be explained rationally, depending on your point-of-view. But if that's true, then the biggest question that remains is the nature of Kevin Garvey's apparent immortality. In the finale, he claims he can't be immortal since he almost died from a massive heart attack and had to have a pacemaker installed. (But he didn't die, so…?)

Can Kevin's multiple apparent resurrections be explained away by science? Could Virgil's poison have simply slowed down Kevin's pulse low enough that he appeared dead? Could John's bullet have simply missed any vital organs? What about his multiple drownings in the final season? Is Kevin, Sr. just really good at CPR? Or is Kevin actually incapable of dying?

2. What Happened To The Guilty Remnant?

In the Season 3 premiere, viewers watched as Meg's violent and unruly sect of the chain-smoking cult was blown off the map via drone strike. But hers was just one small offshoot of a massive organization; so whatever happened to the rest of the GR? The cult is never seen or referenced at all in Season 3, and fans may be curious what the nihilistic mutes were doing in the days leading up to the seven-year anniversary of the Sudden Departure — a date that had plenty of "normal" people in a tizzy, not to mention already-unstable cult members.

Surely the GR must have had plans for such an important anniversary. Or had the organization dwindled and fizzled out in the years between Season 2 and Season 3? Had the rest of the cult also been targeted and wiped out by AFTEC? Or are they still standing around, silently smoking and staring creepily at strangers? (For that matter, do they exist at all in Australia, or is the Guilty Remnant a purely American response to the rapture?)

3. What's Everyone In Mapleton Up To?

Speaking of characters viewers didn't get a chance to see in Season 3, it's been a while since the show checked in with any of the residents of Mapleton, New York. There's no denying that the relocation from Mapleton to Jarden was a stroke of genius that creatively resuscitated the show; but that doesn't mean there aren't characters that viewers care about in the upstate suburb.

Did Aimee ever reconcile with her family and move home, or is she still crashing on friend's couches? Does Lucy Warburton know about the Australian exploits of her former lover, Kevin Garvey, Sr.? Is she still mayor of Mapleton? And are the Frost twins still as lovably bumbling as always?

The last time Kevin's dad was onscreen, he was sitting on the roof of Grace's house, asking his son, "What now?" after the great flood failed to arrive. Viewers never got an answer to that question… and I'm curious if Kevin himself ever did. Did he ever find purpose in his life again after failing to prevent the non-existent apocalypse?

Kevin, Jr. was seemingly able to purge himself of whatever mental instability he had by literally blowing up his "international assassin" dimension/subconscious/whatever. Did Kevin, Sr. also find a way to exorcise his demons? Or is he still hearing voices at the ripe old age of 91?

5. Did Matt Ever Return To The Pulpit?

After Matt Jamison's encounter with "God" on the Tasmanian lion sex orgy boat, the former man of the cloth seemed to loose his stringent faith — or at least start to question it harder than ever. In his last interaction with Nora, he told his sister that his greatest fear was that he wouldn't die of cancer and would have to go on preaching without knowing any of the answers. Of course, viewers learn that Matt did pass away… but did he ever find the strength and faith to return to the church before he died? Or did he live the rest of his short life in doubt?

Speaking of "God," what's up with David Burton? Kevin's not the only character on the show who was apparently immortal, if you believe the former Olympian's claim that he returned to life after falling and breaking his neck in a climbing accident. Obviously, he probably wasn't literally the earthly manifestation of Yahweh, given how he was mauled to death by a lion and all. But the fact that Kevin encountered the man — who he didn't know and had never met — all three times he journeyed into the afterlife suggests that there was something genuinely mystical about Burton. And if not, what's the rational explanation for his appearances during Kevin's near-death experiences?

Thankfully, fans learned that Laurie didn't in fact kill herself on that ominous scuba diving expedition she undertook earlier in the season. So was that whole scene just a fake-out, and Laurie never actually had any real intention of committing suicide? Or did she head out on that boat intending to end her life, only to change her mind after that fateful phone call from her kids? Unfortunately, the therapist's thought process remains opaque till the end.

8. What Did Nora Shout Inside The LADR Device?

In the series finale, viewers are initially led to believe that Nora changed her mind about going through the LADR device, when she appeared to panic at the last second and prepare to shout something out that seemed a lot like the word "stop." But at the end of the episode, she tells Kevin that she did go through. If that's true, what did she say just before the water rose over her head? Was she just saying a last goodbye to her brother Matt? Or was she in fact saying "stop," and it was simply too late to halt the procedure?

Of course, fans won't ever know whether Nora actually changed her mind about going through the device or not, since that would also spoil the question of whether or not her entire story about her experience on the other side was true. Ultimately, that's the biggest question posed by the finale. Did Nora, the biggest skeptic on the show, have a genuinely supernatural experience? Or did she simply concoct a story to cover her embarrassment over the fact that she staked her entire relationship and future on a scheme she ultimately couldn't go through with — because "it's just a nicer story," as the nun would say?

10. Will Kevin & Nora Live Happily Ever After?

As hopeful as the finale seems, these two don't have the greatest track record when it comes to sticking together for very long. They still live in a very uncertain world, and they both still definitely have issues and baggage and grief that they will need to overcome in order to be happy together in the long term. (Not to mention the fact that they both still have yet to apologize for the traumatic argument they had in that Sydney hotel room, the one that Kevin tried to erase from existence with his amnesia gambit.)

Are you a pessimist or an optimist? After three seasons of existential angst, I choose to believe that Lindelof and Perrotta are leaving viewers with a happy — if melancholy — ending, and that these two crazy kids will find a way to make it work. What do you believe?

Lindelof devoted an entire episode of his previous series to explaining how his attractive male protagonist got his anachronistic tattoos. So why didn't we ever get a similar answer for Kevin's massive amounts of ink? I really feel betrayed on this count, Lindelof. I was counting on you for an answer to this burning question. I guess I'll have to resort to writing my own fan-fiction in order to explain it now…

With The Leftovers gone for good, I guess fans will just have to learn to "let the mystery be" when it comes to these few lingering unanswered questions.