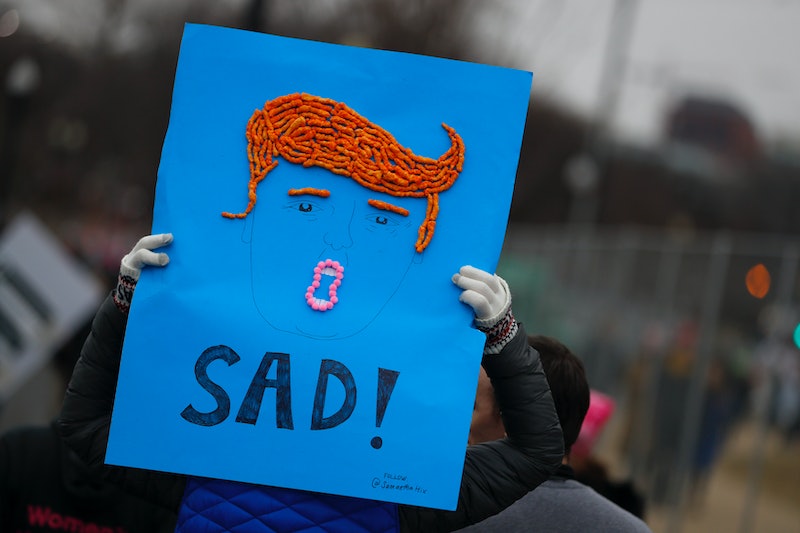 On Jan. 21, 2017, millions of people around thr world took to the streets of their towns for the Women's March, in a bid to fight back against inequalities and racism that have plagued our world for far too long. In a show of solidarity, protesters made it clear that the policies President Donald Trump and his advisors hoped to put forth would not be tolerated. Now, one year later on Jan. 20, 2018, the world will reunite for Women's March 2018. If you're planning on attending, you may be trying to come up with a punny Women's March sign idea to hold up proudly during the protest.

I had the same thought before the march in 2017. Even after I had created a sign, I barely made it to the march. As I walked out of the train station in Washington D.C., I was greeted by a sea of pink, as well as officers saying they wish they could come along to march beside us all. As we reached the meeting spot I felt hope for our country for the first time since the election results had come in.

One of my favorite parts of the Women's March was seeing how clever people were with the signs they had brought. While I had gone with a double-sided, to the point approach, others had the most clever march signs I had ever seen.

One that really stuck out to me for it's playfulness was "Sushi roles not gender roles." In addition to being hilarious, it really showed how simple the solution to our problems can be if each person just does right by each other.

Whether you went to a Women's March in 2017 or not, going to the Women's March 2018 will be an immensely rewarding experience. Knowing you are out there giving your all for a better America is an amazing feeling. Progress can happen as long as we keep pushing the needle forward.

Looking to attend the women's march with flare? Read on for punny sign idea for the Women's March 2018.