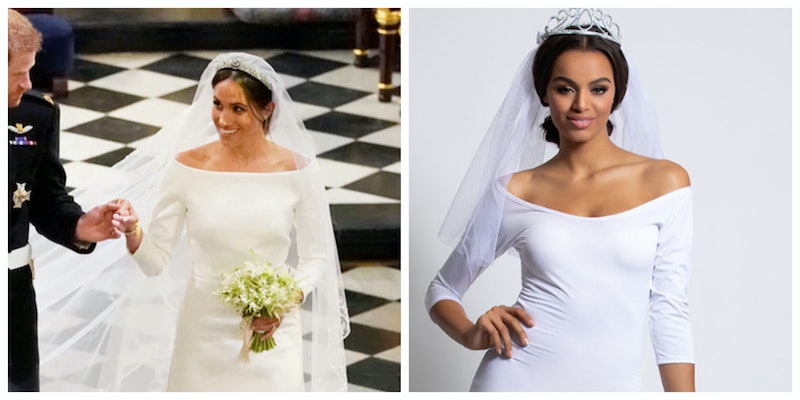 When Meghan Markle and Prince Harry got married, there was tons of buzz around Markle's wedding gown. From who would design it to what it would look like, it was a buzzed about item. Now, a sexy Meaghan Markle halloween costume exists, and it's styled after that now iconic dress. Yea, really, and no, the queen would definitely not approve.

Given that Markle and Prince Harry's wedding was only a few months and they just announced that they're expecting their first child, a Markle Halloween costume should have been expected. Why? Because it was a major pop culture moment from this year, and those always make for great Halloween fodder. After all, don't you remember all the Wrecking Ball costumes when Miley Cyrus's single debut? Iconic.

While Cyrus and Markle aren't exactly twinsies when it comes to style or career, their ensembles still worked their way into the collective pop culture imagination. Now, Markle's wedding dress is a sexy Halloween costume thanks to lingerie and costume brand Yandy (offers sizes small-3XL).

The Yandy American Princess costume doesn't exactly say Markle's name or her title as Duchess of Sussex, but it's not subtle in its recreation of her wedding gown. If you ever wanted to be royalty, maybe this is it?

It's not simply the design of the costume that lets people know it's modeled after Markle. There's also the fact that alongside the bouquet, dress, tiara, and veil, the model low key looks like Markle, and there is a numbered briefcase beside that can presumably stand for the Duchess of Sussex's former role as a model for Deal or No Deal.

The only drawback to the costume if you want to be a princess for the day is that it's currently only offered in sizes small-large.

The Queen would certainly not approve of this costume, and it's not Yandy's only pop culture influenced item. The brand actually seems to be somewhat known for them. While not all of them are direct Halloween looks, their lingerie is incredible pop culture inspired.

In fact, just recently, the brand launched their Morphin Babe collection, multi-colored sets of lingerie inspired by non-other than the alien fighting team the Power Rangers. From the Red Ranger to the Blue Ranger, Yandy has your needs covers. There's no Rita Repulsa lingerie, though, and that's kind of a shame.

Then, of course, there's the other well-known character pieces from the brand. If you're a lover of all things Disney, Yandy's Princess collection is about to be the new thing you never thought you needed. From Snow White to Belle, the brand has Disney Princess inspired lingerie, you'll love, and it's size inclusive coming in sizes small-3XL.

The same is true of their Harry Potter lingerie. Yes, it exists, too. Clearly, Yandy doesn't have a shortage of material when it comes to everyone's favorite fandoms.

If you're not feeling like being a Disney princess, but maybe want to be royalty for Halloween, the Meghan Markle sexy duchess costume may be your next purchase.

More like this
Cyber Monday Deals 2022: The Best Fashion Sales To Shop
By Dominique Norman
The Best Black Friday 2022 Fashion Deals To Shop This Year
By Dominique Norman
Mejuri’s Big Black Friday & Cyber Monday 2022 Sales Are Not To Be Missed
By Allie Fasanella
26 Christmas Outfit Ideas That Will Sleigh The Holiday Season
By Allie Fasanella
Get Even More From Bustle — Sign Up For The Newsletter